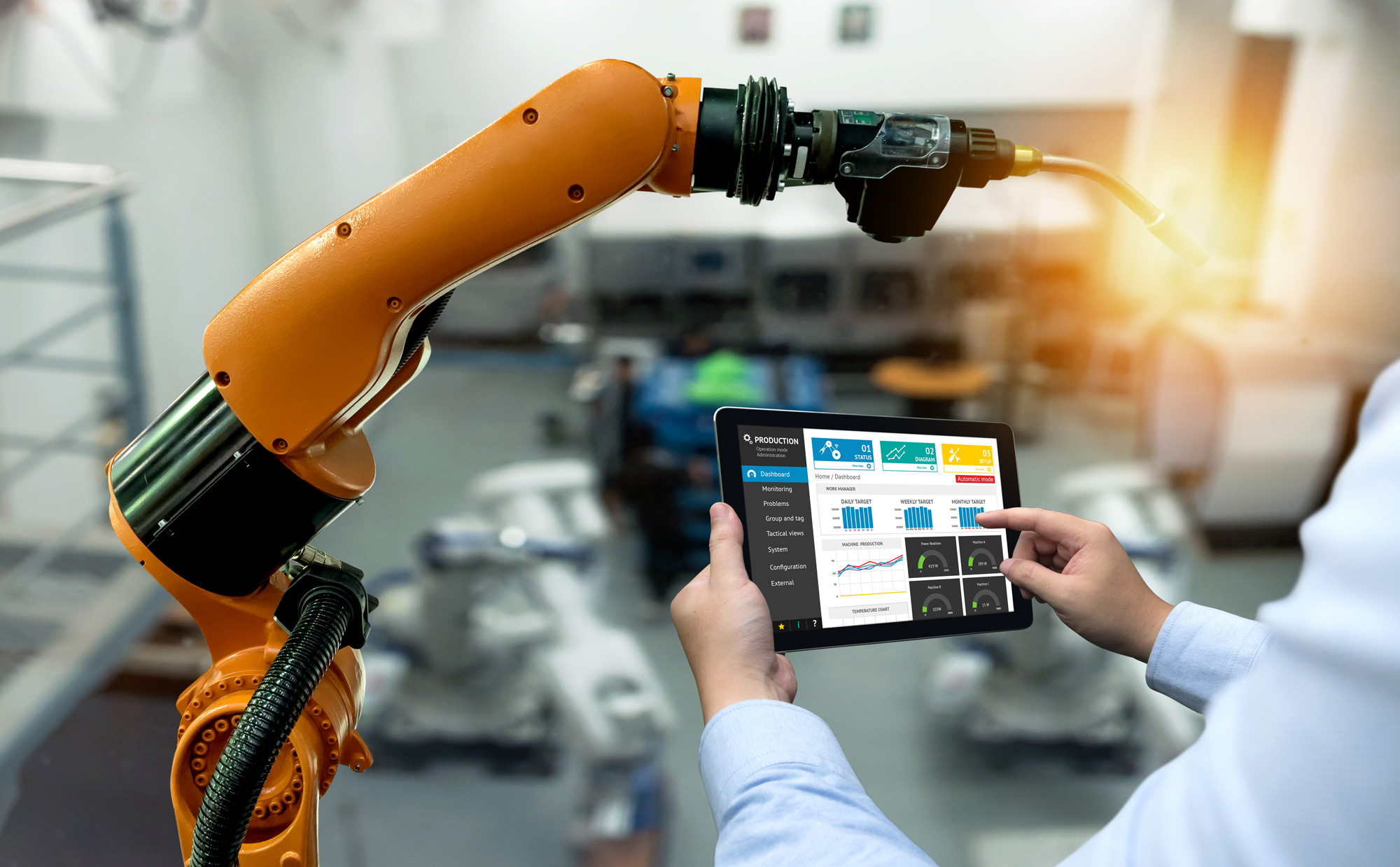 Dell EMC Integrated System for Microsoft Azure Stack Hub has been extending Microsoft Azure services to customer-owned data centers for over three years. Our platform has enabled organizations to create a hybrid cloud ecosystem that drives application modernization and to address business concerns around data sovereignty and regulatory compliance.

Dell Technologies, in collaboration with Microsoft, is excited to announce upcoming enhancements that will unlock valuable, real-time insights from local data using GPU-accelerated AI and ML capabilities. Actionable information can be derived from large on-premises data sets at the intelligent edge without sacrificing security. 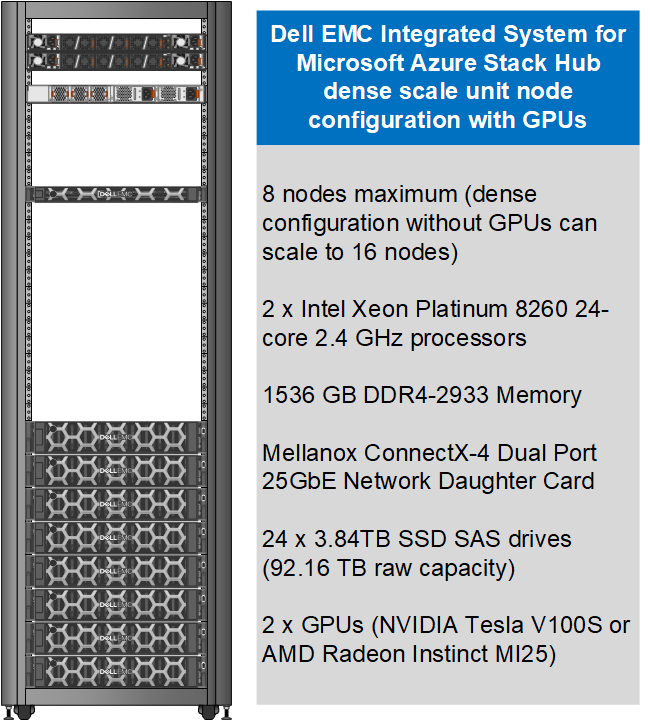 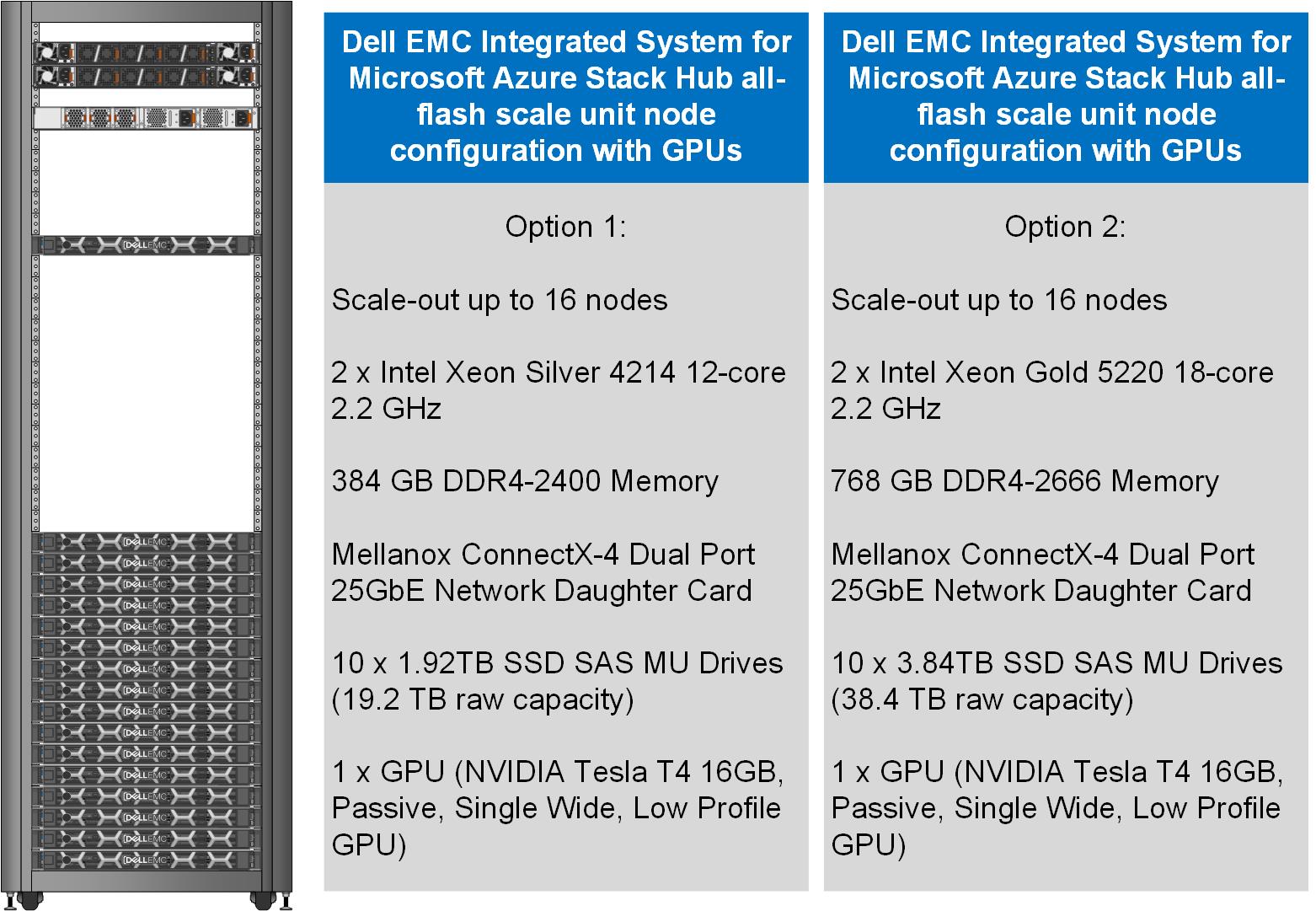 We are also pleased to announce a partnership with AMD to deliver GPU capabilities in our Dell EMC Integrated System for Microsoft Azure Stack Hub. Available today, customers can order our dense scale unit configuration with AMD Radeon Instinct MI25 GPUs aimed at graphics intensive visualization workloads like simulation, CAD applications, and gaming. The MI25 uses GPU partitioning (GPU-P) technology to allow users of an Azure Stack Hub NVv4 VM to consume only a portion of the GPU’s resources based on their workload requirements.

The following table is a summary of our hardware acceleration capabilities.

Following our stringent engineered approach, Dell Technologies goes far beyond considering GPUs as just additional hardware components in the Dell EMC Integrated System for Microsoft Azure Stack Hub portfolio. We apply our pedigree as leaders in appliance-based solutions to the entire lifecycle of all our scale unit configurations. The dense and all-flash scale unit configurations with integrated GPUs are designed to follow best practices and use cases specifically with Azure-based workloads, rather than workloads running on traditional virtualization platforms. Dell Technologies is also committed to ensuring a simplified experience for initial deployment, patch and update, support, and streamlined operations and monitoring for these new configurations.

There are a couple of additional details worth mentioning about our new Azure Stack Hub dense and all-flash scale unit configurations with hardware acceleration: 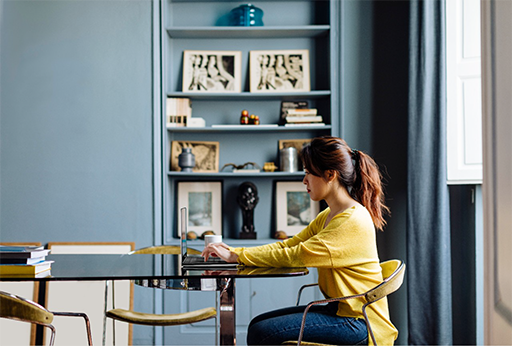 Dell Technologies has released the new PowerEdge R750xa server, a GPU workload-based platform that is designed to support artificial intelligence, machine learning, and high-performance computing solutions. The dual socket/2U platform supports 3rd Gen Intel Xeon processors (code named Ice Lake). It supports up to 40 cores per processor, has eight memory channels per CPU, and up to 32 DDR4 DIMMs at 3200 MT/s DIMM speed. This server can accommodate up to four double-width PCIe GPUs that are located in the front left and the front right of the server.

The NVIDIA A100 GPUs are built on the NVIDIA Ampere architecture to enable double precision workloads. This blog evaluates the new PowerEdge R750xa server and compares its performance with the previous generation PowerEdge C4140 server.

The following table shows the specifications for the NVIDIA GPU that is discussed in this blog and compares the performance improvement from the previous generation.

This blog quantifies the performance improvement of the GPUs with the new PowerEdge GPU platform.

Using a single node PowerEdge R750xa server in the Dell HPC & AI Innovation Lab, we derived all results presented in this blog from this test bed. This section describes the test bed and the applications that were evaluated as part of the study. The following table provides test environment details:

The following table provides information about the applications and benchmarks used:

Large-Scale Atomic/Molecular Massively Parallel simulator (LAMMPS) is distributed by Sandia National Labs and the US Department of Energy. LAMMPS is open-source code that has different accelerated models for performance on CPUs and GPUs. For our test, we compiled the binary using the KOKKOS package, which runs efficiently on GPUs. 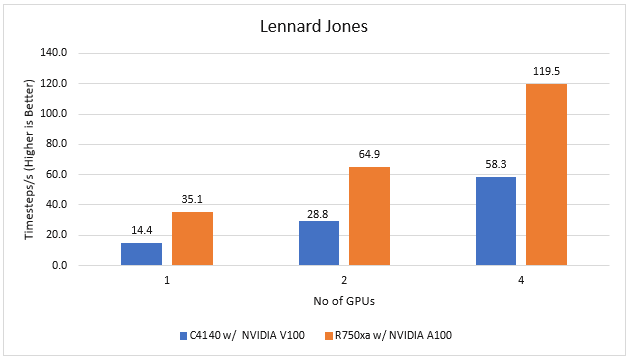 With the newer generation GPUs, this application improves 2.4 times compared to single GPU performance. The overall performance from a single server improved twice with the PowerEdge R750xa server and NVIDIA A100 GPUs.

GROMACS is a free and open-source parallel molecular dynamics package designed for simulations of biochemical molecules such as proteins, lipids, and nucleic acids. It is used by a wide variety of researchers, particularly for biomolecular and chemistry simulations. GROMACS supports all the usual algorithms expected from modern molecular dynamics implementation. It is open-source software with the latest versions available under the GNU Lesser General Public License (LGPL). 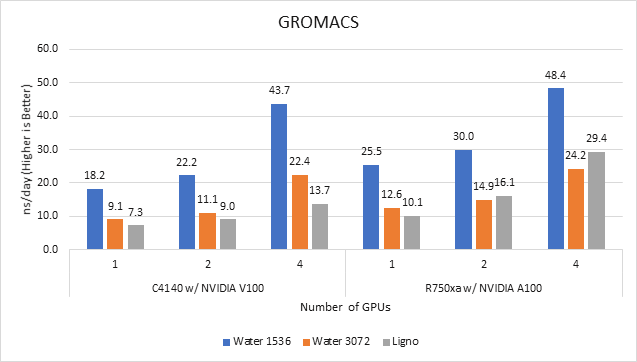 With the newer generation GPUs, this application improved approximately 1.5 times across the dataset compared to single GPU performance. The overall performance from a single server improved 1.5 times with a PowerEdge R750xa server and NVIDIA A100 GPUs.

High-Performance Linpack (HPL) needs no introduction in the HPC arena. It is a widely used standard benchmark tests in the industry. 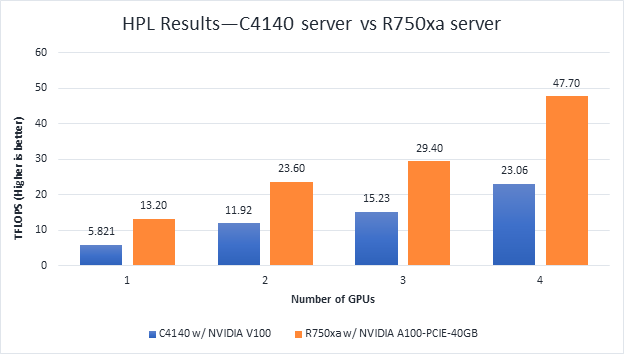 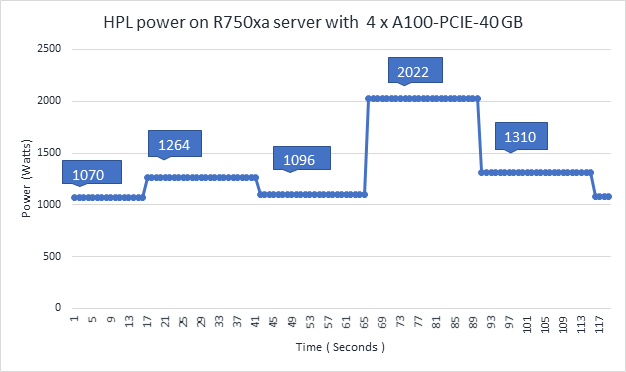 Figure 5 Power use of the HPL running on NVIDIA GPUs

From Figure 4 and Figure 5, the following results were observed: 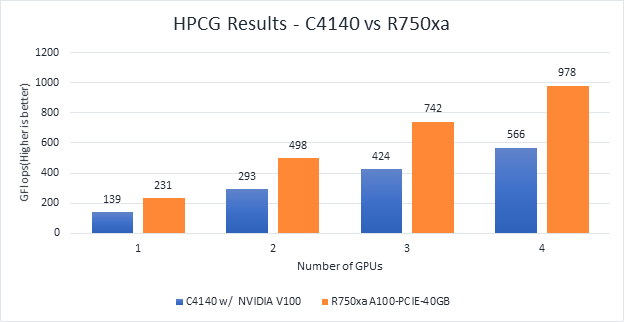 As discussed in other blogs, high performance conjugate gradient (HPCG) is another standard benchmark to test data access patterns of sparse matrix calculations. From the graph, we see that the HPCG benchmark scales well with this benchmark resulting in 1.6 times performance improvement over the previous generation PowerEdge C4140 server with an NVIDIA V100 GPU.

The 72 percent improvement in memory bandwidth of the NVIDIA A100 GPU over the NVIDIA V100 GPU contributes to the performance improvement.

With the newer generation PowerEdge R750xa server and NVIDIA A100 GPUs, the applications discussed in this blog show significant performance improvement.

In future blogs, we plan to evaluate NVLINK bridge support, which is another important feature of the PowerEdge R750xa server and NVIDIA A100 GPUs. 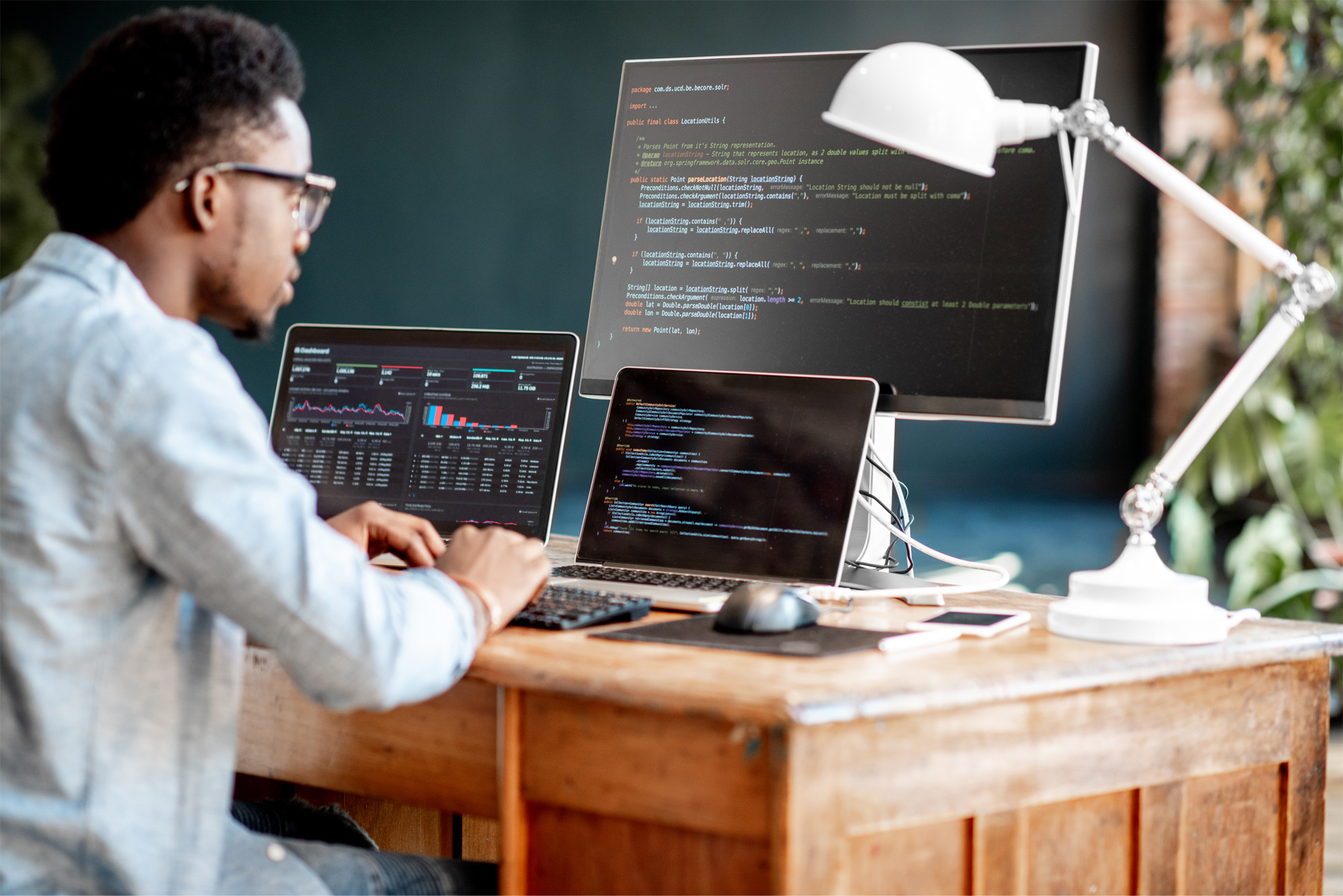 A vast array of services and tooling has evolved in support of microservices and container-based application development patterns.  One indispensable asset in the technology value stream found in most of these patterns is Kubernetes (K8s).  Technology professionals like K8s because it has become the de-facto standard for container orchestration. Business leaders like it for its potential to help disrupt their chosen marketplace.   However, deploying and maintaining a Kubernetes cluster and its complimentary technologies can be a daunting task to the uninitiated.

Enter Microsoft Azure’s portfolio of services, tools, and documented guidance for developing and maintaining containerized applications.  Microsoft continues to invest heavily in simplifying this application modernization journey without sacrificing features and functionality.  The differentiators of the Microsoft approach are two-fold.   First, the applications can be hosted wherever the business requirements dictate – i.e. public cloud, on-premises, or spanning both.  More importantly, there is a single control plane, Azure Resource Manager (ARM), for managing and governing these highly distributed applications.

In this blog series, we share the results of hands-on testing in the Dell Technologies labs with container-related services that span both Public Azure and on-premises with Azure Stack Hub.  Azure Stack Hub provides a discrete instance of ARM, which allows us to leverage a consistent control plane even in environments with no connectivity to the Internet.  It might be helpful to review articles rationalizing the myriad of announcements made at Microsoft Ignite 2019 about Microsoft’s hybrid approach from industry experts like Kenny Lowe, Thomas Maurer, and Mary Branscombe before delving into the hands-on activities in this blog.

Azure Kubernetes Service (AKS) is a fully managed platform service hosted in Public Azure.  AKS makes it simple to define, deploy, debug, and upgrade even the most complex Kubernetes applications.  With AKS, organizations can accelerate past the effort of deploying and maintaining the clusters to leveraging the clusters as target platforms for their CI/CD pipelines.  DevOps professionals only need to concern themselves with the management and maintenance of the K8s agent nodes and leave the management of the master nodes to Public Azure.

Microsoft is working diligently to deliver the fully managed AKS resource provider to Azure Stack Hub.   The first step in this journey is to use AKS engine to bootstrap K8s clusters on Azure Stack Hub.  AKS engine provides a command-line tool that helps you create, upgrade, scale, and maintain clusters.  Customers interested in running production-grade and fully supported self-managed K8s clusters on Azure Stack Hub will want to use AKS engine for deployment and not the Kubernetes Cluster (preview) marketplace gallery item.  This marketplace item is only for demonstration and POC purposes.

AKS engine can also upgrade and scale the K8s cluster it deployed on Azure Stack Hub.  However, unlike the fully managed AKS in Public Azure, the master nodes and the agent nodes need to be maintained by the Azure Stack Hub operator.  In other words, this is not a fully managed solution today.  The same warning applies to the self-hosted Docker Container Registry that can be deployed to an on-premises Azure Stack Hub via a QuickStart template.  Unlike ACR in Public Azure, Azure Stack Hub operators must consider backup and recovery of the images.  They would also need to deploy new versions of the QuickStart template as they become available to upgrade the OS or the container registry itself.

If no requirements prohibit the sending of monitoring data to Public Azure and the proper connectivity exists, Azure Monitor for containers can be leveraged for feature-rich monitoring of the K8s clusters deployed on Azure Stack Hub with AKS engine.   In addition, Azure Arc for Data Services can be leveraged to run containerized images of Azure SQL Managed Instances or Azure PostgreSQL Hyperscale on this same K8s cluster.  The Azure Monitor and Azure Arc for Data Services options would not be available in submarine scenarios where there would be no connectivity to Azure whatsoever.   In the disconnected scenario, the customer would have to determine how best to monitor and run data services on their K8s cluster independent of Public Azure.

Here is a summary of the articles in this blog post series:

Part 1: Running containerized applications on Microsoft Azure’s hybrid ecosystem – Provides an overview of the concepts covered in the blog series.

Part 3:  Deploy a self-hosted Docker Container Registry – Use one of the Azure Stack Hub QuickStart templates to setup container registry and push images to this registry. Then, pull these images from the registry into the K8s cluster deployed with AKS engine in Part 2.