If you have not been tuned into the VxRail announcements at VMworld Barcelona last month, this is news to you.  VxRail is adding more performance punch to the family with two new all-NVMe platforms.   The VxRail E Series 560N and P Series 580N, with the 2nd Generation Intel® Xeon® Scalable Processors, offer increased performance while enabling customers to take advantage of decreasing NVMe costs.

Balancing workload and budget requirements, the dual-socket E560N provide a cost-effective, space-efficient 1U platform for read-intensive workloads and other complex workloads.   Configured with up to 32TB of NVMe capacity, the E560N is the first all-NVMe 1U VxRail platform.  Based on the PowerEdge R640, the E560N can run a mix of workloads including data warehouses, ecommerce, databases, and high-performance computing.  With support for Nvidia T4 GPUs, the E560N is also equipped to run a wide range of modern cloud-based applications, including machine learning, deep learning, and virtual desktop workloads.

Built for memory-intensive high-compute workloads, the new P580N is the first quad-socket  and also the first all-NVMe 2U VxRail platform.  Based on the PowerEdge R840, the P580N can be configured with up to 80TB of NVMe capacity.  This platform is ideal for in-memory databases and has been certified by SAP for SAP HANA.  The P580N provides 2x the CPU compared to the P570/F and offers 25% more processing potential over virtual storage appliance (VSA) based 4-socket HCI platforms that require a dedicated socket to run (VSA).

The completion of the SAP HANA certification for the P580N which coincides with the P580N’s general availability demonstrates the ongoing commitment to position VxRail as the HCI platform of choice for SAP HANA solutions.  The P580N provides even more memory and processing power than the SAP HANA certified P570F platform.  An updated Validation Guide for SAP HANA on VxRail will be available in early January on the Dell EMC SAP solutions landing page for VxRail.

For more information about VxRail E560N and P580N, please check out the resources below:

All Things VxRail at dellemc.com

Satellite nodes are a great addition to the VxRail portfolio, empowering users at the edge, as described in David Glynn’s blog Satellite Nodes: Because sometimes even a 2-node cluster is too much. Although satellite nodes are still new, we’ve been working hard and have already started making improvements. Dell’s latest VxRail 7.0.350 release has a number of new VxRail enhancements and in this blog we’ll focus on these new satellite node features: 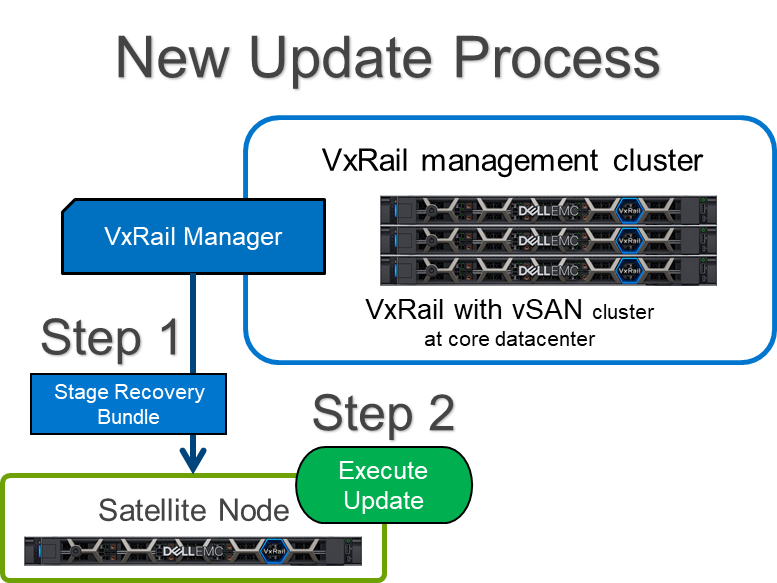 Staging the bundle in advance is great because we know bandwidth can be limited at the edge and this allows ample time to transfer the bundle in advance to ensure your update happens during your scheduled maintenance window. Once your bundles are staged, it’s as simple as scheduling the updates and letting VxRail execute the node update. This improvement ensures that you can complete the update within the expected timeframe to minimize downtime. Satellite nodes sit outside the cluster and, as a result, workloads will go offline while the node is updated.

Do you have a large number of edge locations that could use satellite nodes and need an easier way to manage at scale? Good news! These new APIs are perfect for making edge life at scale easier.

The new APIs include:

The introductory release of VxRail satellite nodes featured LCM operations through the VxRail Manager plug-in, which could be quite time consuming if you are managing a large number of satellite nodes. We saw room for improvement so now administrators can use VxRail APIs to add, update, and remove satellite nodes to simplify and speed up operations.

There is also a failure rate feature that will set a condition to exit from an LCM operation. For example, if you are updating multiple satellite nodes at one time and nodes are failing to update, the failure rate setting is a way to abort the operation altogether if the rate surpasses a set threshold. The default threshold is 20% but can be set anywhere from 1% to 100%. Using the VxRail API, you can adjust settings like this that are not available in the VxRail Manager.

These new APIs are great for users with a large number of VxRail satellite nodes. Adding, removing, and updating satellite nodes can now be automated through the new APIs, saving you precious time across your edge locations.

VxRail satellite nodes can now use Secure Enterprise Key Management (SEKM), made available through the Dell PowerEdge servers that VxRail is built on. What is SEKM you might ask? Well, SEKM gives you the ability to secure drive access using encryption keys stored on a central key management server (not on the satellite node). 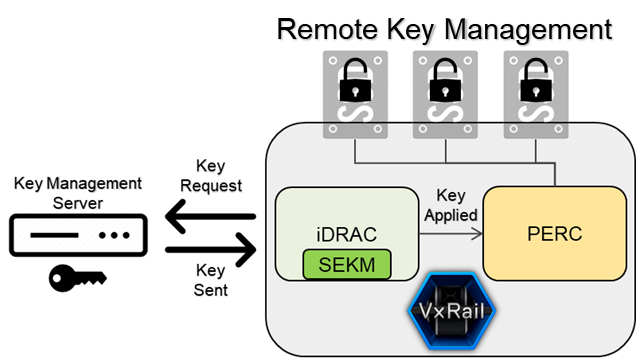 SEKM is great for many reasons. First, an edge location might be more exposed and have less physical security than your typical data center but that doesn’t mean securing your data is any less important. SEKM keeps your data drives locked even if the entire server is stolen. When paired with self-encrypting drives, you can secure the data even further. Second, the encryption keys are stored in a centralized location, making it easier to manage the security of large numbers of satellite nodes instead of having to manage each satellite node individually.

In this blog we’ve highlighted some exciting new satellite node features, including an improved update process, new APIs, and enhanced security, all of which enhance managing the edge at scale. Check out the full VxRail 7.0.350 release and see the full list of enhancements by clicking the link below.