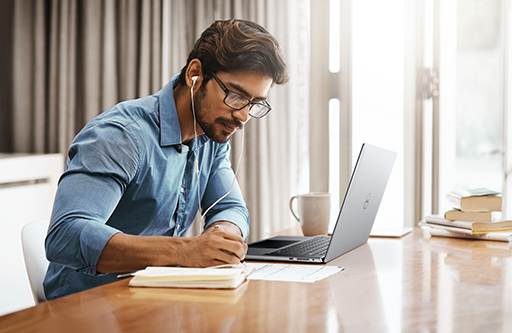 The Container Storage Interface (CSI) is a standard for exposing file and block storage to containerized workloads on Kubernetes, OpenShift and so on. CSI helps third-party storage providers (for example PowerFlex) to write plugins for OpenShift to consume storage from backends as persistent storage.

CSI driver for Dell EMC VxFlex OS can be installed using Dell EMC Storage CSI Operator. It is a community operator and can be deployed using OperatorHub.io. 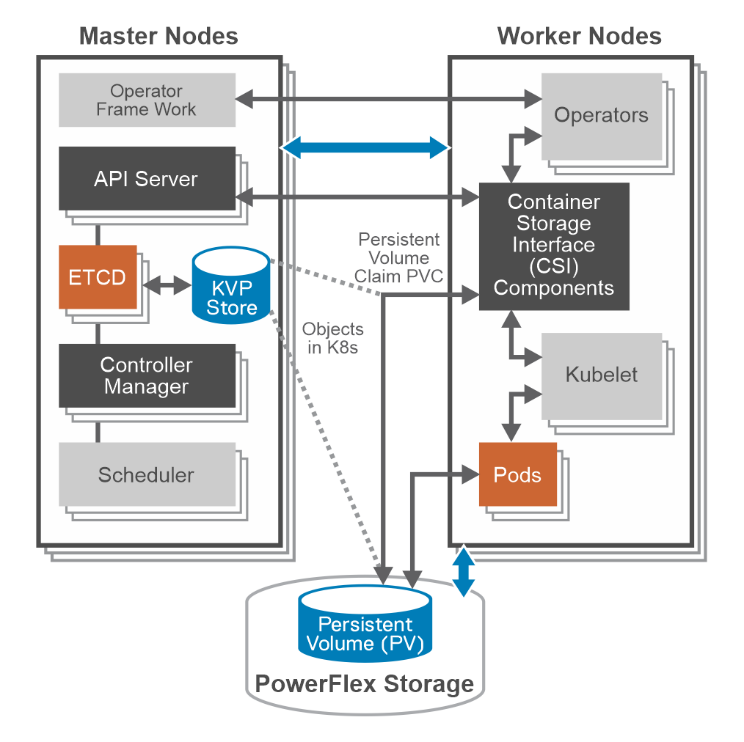 Master nodes components do not communicate directly with CSI driver. It interacts only with API server on Master nodes. It MUST watch the Kubernetes API and trigger the appropriate CSI operations against it. Kubelet discovers CSI drivers using kubelet plug-in registration mechanism. It directly issues calls to CSI driver. 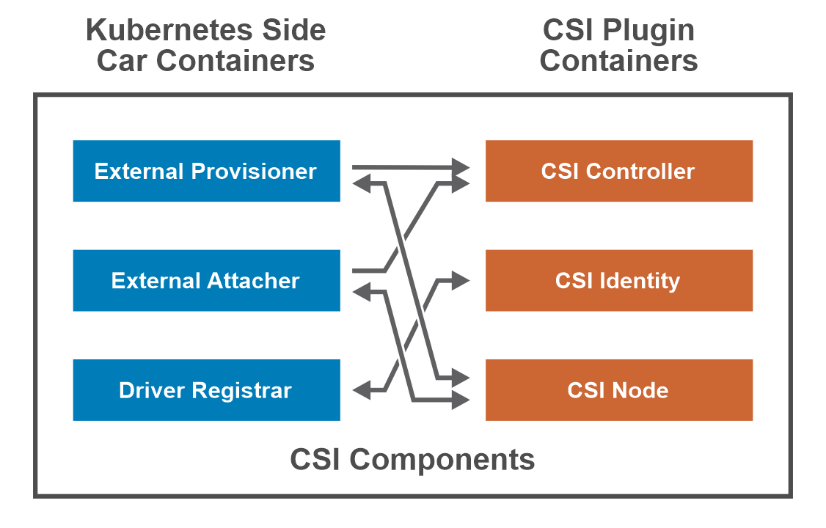 External Provisioner –The CSI external provisioner is a sidecar container that watches the k8s API server for PersistentVolumeClaim objects. It calls CreateVolume against the specified CSI endpoint to provision a volume.

External Attacher – The CSI external attacher is a sidecar container that watches the API server for VolumeAttachment objects and triggers controller [Publish|Unpublish] volume operations against a CSI endpoint.

CSI Controller plug-in – The controller component can be deployed as a Deployment or StatefulSet on any node in the cluster. It consists of the CSI driver that implements the CSI Controller service.

CSI Identity – It enables k8s components and CSI containers to identify the driver.

CSI Node Plugin –The node component should be deployed on every node in the cluster through a DaemonSet. It consists of the CSI driver that implements the CSI Node service and the node driver registrar sidecar container.

Storage Class – This object helps you create PV/PVC pair for pods. It stores information about creating a persistent volume.

Static Provisioning – This allows you to manually make existing PowerFlex storage available to the cluster.

Dynamic Provisioning - Storage volumes can be created on-demand.  Storage resources are dynamically provisioned using the provisioner that is specified by the StorageClass object.

Retain Reclaiming – Once PersistentVolumeClaim is deleted, the corresponding PersistentVolume is not deleted rather moved to Released state and its data can be manually recovered.

Access Mode - ReadWriteOnce -- the volume can be mounted as read/write by a single node. 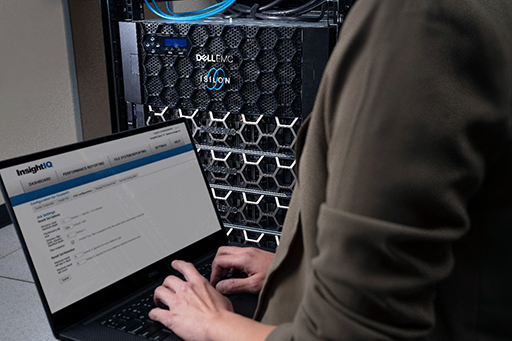 Are you feeling safe about the security of your data center’s infrastructure?   Chances are, you aren’t.    According to a recent poll1, 74% of customers report experiencing some form of cyber attack in the last twelve months, and 86% were concerned about potential cyberattacks.   Clearly, data center security is a topic than can no longer be ignored - and most of our customers are taking steps to ensure their data is safe.  Yet even though it’s necessary, adopting data center security can be confusing, complex, and difficult to implement.

Dell EMC CloudLink aides our customers in this effort by being reliable, flexible, and easy to use.  Our 7.1 release adds new tools to our toolbox including shallow rekey for our Container based encryption, support for vVols encryption and IPv6 only environments, and the new Secure Configuration Summary page designed to make security audits of CloudLink a breeze. 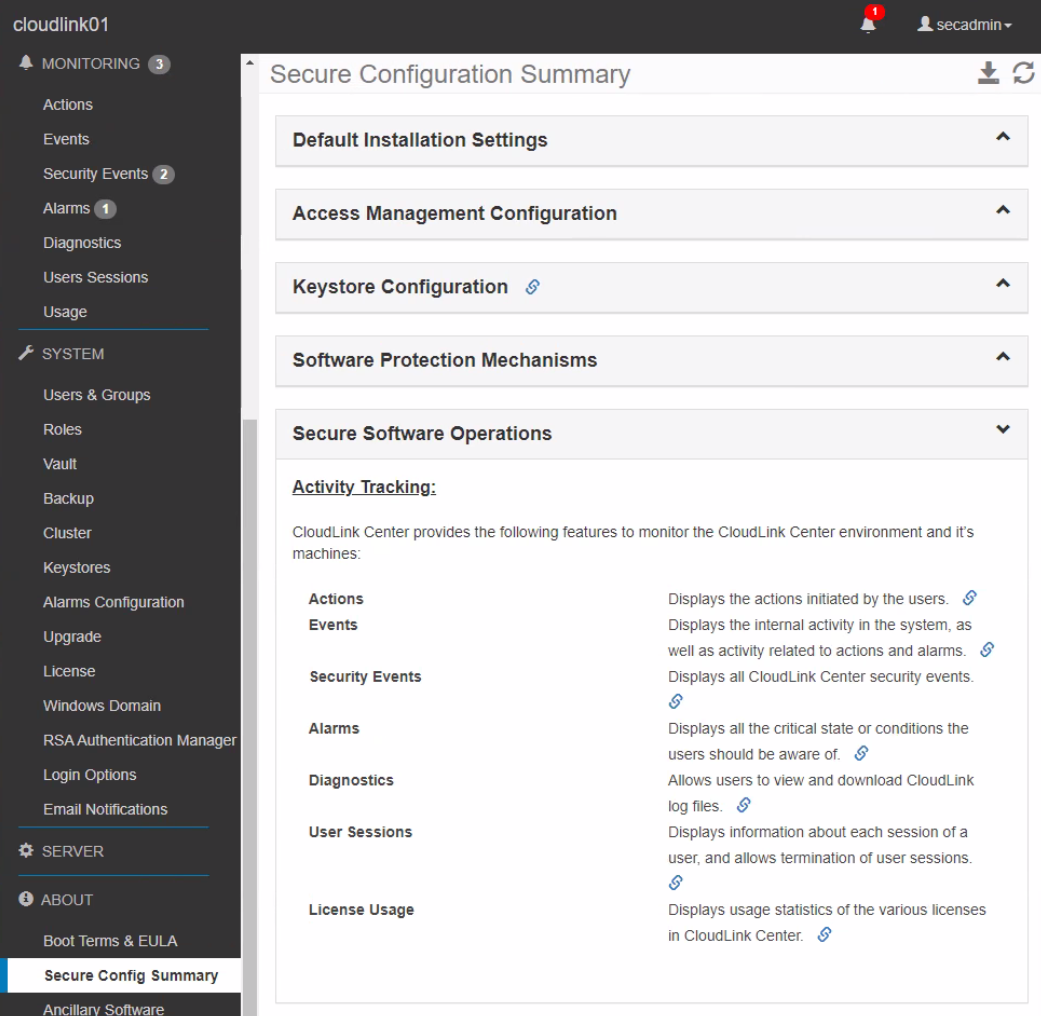 Every security related framework published discusses the need for regular monitoring and assessment of implemented security controls to ensure that the products and deployment are meeting relevant industry standards.  Such activities usually include the dreaded yearly security audit.   Datacenter administrators view this effort with disfavor because it takes time out of their already busy schedule to walk through the deployment with the auditor to prove compliance.

In the past we’ve heard from our customers that the CloudLink GUI is easy enough to navigate that security audit reviews weren’t too painful, but they occasionally expressed that it would be nice to make them a little bit easier.   Well we heard their requests loud and clear and have obliged with the Secure Configuration Summary.  We’ve gathered the information commonly requested during security audits onto one page so when the security administrator and auditor go to CloudLink for a review, it’s a one stop shop.

With audits though, simply viewing configuration settings isn’t enough as most auditors require tangible proof to attach to their reports.  Screen shots work but we offer something better – the ability to export the configuration settings provided on the summary page.   As with most of our GUI pages, you can export the Secure Configuration Summary to a handy-dandy spreadsheet which can be presented directly to the auditor.  A one click audit review – can it get any easier than that?

Of course, not all audits are the same and some requirements are more extensive than others.  To accommodate this eventuality, our summary page provides direct links to the configuration pages for each setting.  If an auditor needs more information on a particular configuration, simply jump to the relevant page, review, and download an export if needed.

Encryption is hard and it can be a challenge to understand, implement, and maintain.  We understand that most of our customers are not in the datacenter security business.   CloudLink strives to make data encryption in the datacenter a simple, set it and forget it task, so that our customers can focus on their core business, not on trying to figure out how to keep their data safe – that’s our job.

If you would like to know more about CloudLink and our latest release please visit our website and reach out to your Dell Technologies sales team to ask how we can make data encryption easy for you too. 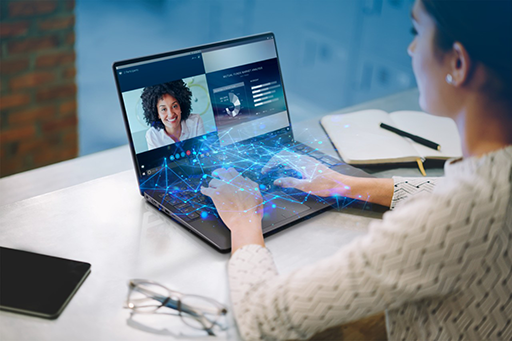 The VMware Tanzu Application Service (TAS) is based on Cloud Foundry –an open-source cloud application platform that provides a choice of clouds, developer frameworks, and application services. Cloud Foundry is a multi-cloud platform for the deployment, management, and continuous delivery of applications, containers, and functions. TAS abstracts away the process of setting up and managing an application runtime environment so that developers can focus solely on their applications and associated data. Running a single command—cf push—creates a scalable environment for your application in seconds, which might otherwise take hours to spin up manually. TAS allows developers to deploy and deliver software quickly, without the need of managing the underlying infrastructure.

PowerFlex software-define storage with unified compute and networking offers flexibility of deployment architecture to help best meet the specific deployment and architectural requirements. PowerFlex can be deployed in a two-layer for asymmetrical scaling of compute and storage for “right-sizing capacities, single-layer (HCI), or in mixed architecture.

The PowerFlex management software manages the capacity of all of the disks and acts as a back-end for data access by presenting storage volumes to be consumed by the applications running on the nodes. PowerFlex Manager also provides the essential operational controls and lifecycle management tools. The production cluster hosts the compute nodes that are used for deployment of TAS VMs. TAS components are deployed across three dedicated compute clusters that are designated as three availability zones.   These compute clusters are managed by the same 'compute workload' vCenter as the dedicated Edge cluster.   The following figure depicts the layout in the lab environment: 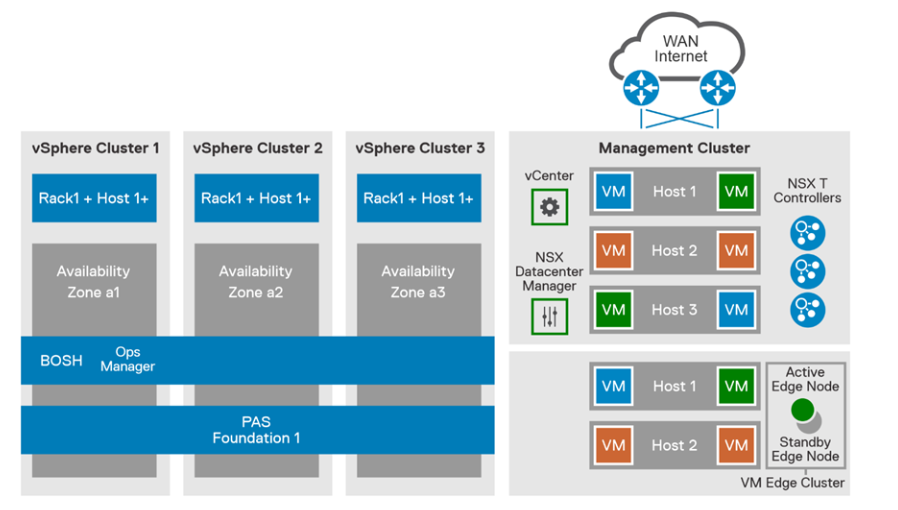 The compute infrastructure illustrates the best practice architecture using 3 AZ’s using PowerFlex rack in hyperconverged configured nodes. This design ensures the high availability of nodes (i.e., nodes in AZ1 will still function if AZ2 or AZ3 goes down). A dedicated compute cluster in each AZ’s combines to form Isolation Zone (IZ). These AZ’s can be used to deploy and run the TAS stateful workloads requiring persistent storage. On the PowerFlex storage we have created volumes in the backend which are being mapped to vSphere as Datastores.

PowerFlex storage distributed data layout scheme is designed to maximize protection and optimize performance. A single volume is divided into chunks. These chunks will be distributed (striped) on physical disks throughout the cluster, in a balanced and random manner. Each chunk has a total of two copies for redundancy.

PowerFlex can be feature configured optionally to achieve additional data redundancy by enabling the feature Fault sets. Persistent Storage for each AZ could be its own PowerFlex cluster. By implementing PowerFlex feature Fault sets we can ensure that the persistent data availability all time. Fault Sets are subgroup of SDS s (Software defined Storage) installed on host servers within a Protection Domain. PowerFlex OS will mirror data for a Fault Set on SDSs that are outside the Fault Set. Thus, availability is assured even if all the servers within one Fault Set fail simultaneously.

PowerFlex enables flexible scale out capabilities for your data center also provides unparalleled elasticity and scalability. Start with a small environment for your proof of concept or a new application and add nodes as needed when requirements evolve.