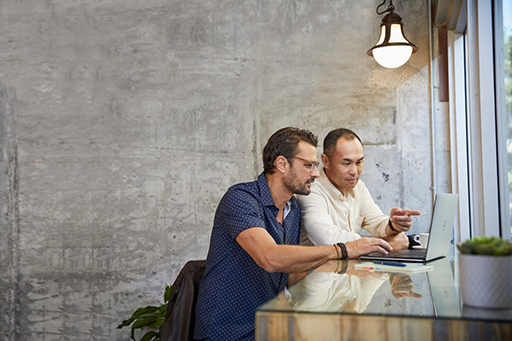 It’s a common question: “How much database performance will we gain when upgrading to the newest server technology?” The person asking the question wants to justify the investment based on measured benefit.  An engineering team here at Dell Technologies ran a load test comparing the prior generation of AMD EPYC processors to the new EPYC Zen3 processors. These test findings show a double-digit gain in performance for a typical write-heavy transactional workload using the new AMD EPYC Zen3 processors.

We used two Dell EMC PowerEdge R7525 servers with different generations of AMD EPYC processors.  One server was configured with two 32-core AMD EPYC 75F3 processors running with a base clock speed of 2.95 GHz that can boost up to 4 GHz.

The table below compares the AMD EPYC Zen3 processors to the Zen2 processors used in the other server.  We see that the new Zen3 processors have a higher boost clock speed and double the L3 cache.  These new processors should accelerate database workloads by providing greater performance.

Both generations of processors support 8 memory channels, with each memory channel supporting up to 2 DIMMS. We believe the faster boost clock speed combined with doubling the L3 cache for the new generation AMD EPYC Zen3 processors will drive greater database performance; however, there are many more features that we haven’t covered. This AMD webpage covers the EPYC 75F3 processors. For a deep technical dive into performance tuning database workloads we recommend this RDBMS tuning guide.

The table below shows a comparison summary of two PowerEdge servers used in the testing.

Microsoft SQL Server Enterprise Edition 2019 was virtualized to reflect the most common configuration we see at customer sites.  The performance differences between bare-metal and VMware virtualization are rarely a consideration for customers since AMD and VMware vSphere 7.0 CU2 are continuously optimizing performance. The paper, “Performance Optimizations in VMware vSphere 7.0 U2 CPU Scheduler for AMD EPYC Processors” shows that the VMware CPU scheduler archives up to 50% better performance than 7.0 U1.  Virtualized data management systems have also enabled Database-as-a-Service offerings on-premise for many enterprises. The capability to quickly provision database copies can significantly benefit many IT priorities and programs.

The Dell Engineering team used VMware virtualization to create a SQL Server virtual machine template for this testing.  That template allowed the team to quickly provision four copies of the exact same virtualized database across the two PowerEdge servers. We hosted two virtualized SQL Server databases on each PowerEdge server. The figure below shows the infrastructure configuration for this performance test.

The virtual machine configuration for the four SQL Servers databases and the memory allocations for SQL Server are detailed below.

Both databases used VMware vSphere’s Virtual Machine File System (VMFS) on Direct Attached Storage (DAS). In the table below shows the sizes of each storage volume used for the virtual machine. There are two data volumes (data 1 and data 2) to increase I/O bandwidth to the disk storage. By having two volumes, reads and writes are split between the volumes increasing storage performance.

In summary, the entire SQL Server software stack consisted of:

To create an Online Transaction Processing (OLTP) workload on the two SQL Server databases, the team used HammerDB. HammerDB is a leading benchmark tool used with databases like Microsoft SQL Server, Oracle, and others. We used HammerDB to generate a TPC-C workload that simulates terminal operators executing transactions, which is characteristic of an OLTP workload. A typical OLTP workload sends thousands of small read and write requests per minute to that database that must get committed to storage. New Orders Per Minute (NOPM) indicates the number of orders that were fully processed in one minute and is a metric we can use to compare two database systems. Below are the HammerDB settings used for the TPC-C workload test.

The new AMD EPYC Zen3 processors delivered a 20% increase in New Orders Per Minute performance over the prior generation processor! That is a substantial improvement across the two virtualized SQL Server databases running on the PowerEdge R7525 server. See the comparison chart below. 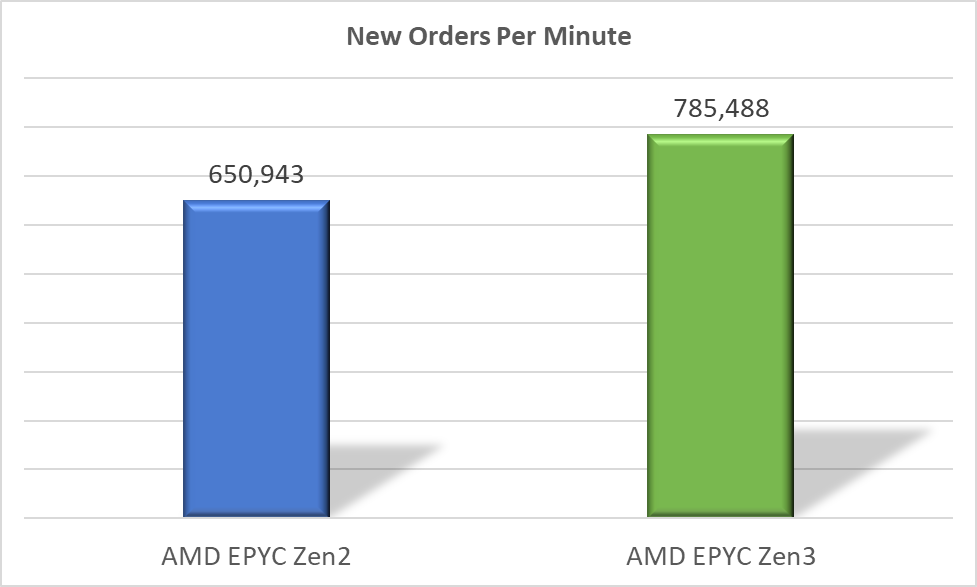 It’s very likely that the boost memory speed of 4.0 GHz and the larger L3 cache in the AMD EPYC Zen3 processors contributed significantly to the 20% performance gain. Every database is different, and results will vary. However, this performance test provides value in terms of understanding the potential gains in moving to AMDs new Zen3 processors. For enterprises considering migrating their databases to a new server platform, serious consideration should be given to using the PowerEdge R7525 servers with the new generation of AMD processors. 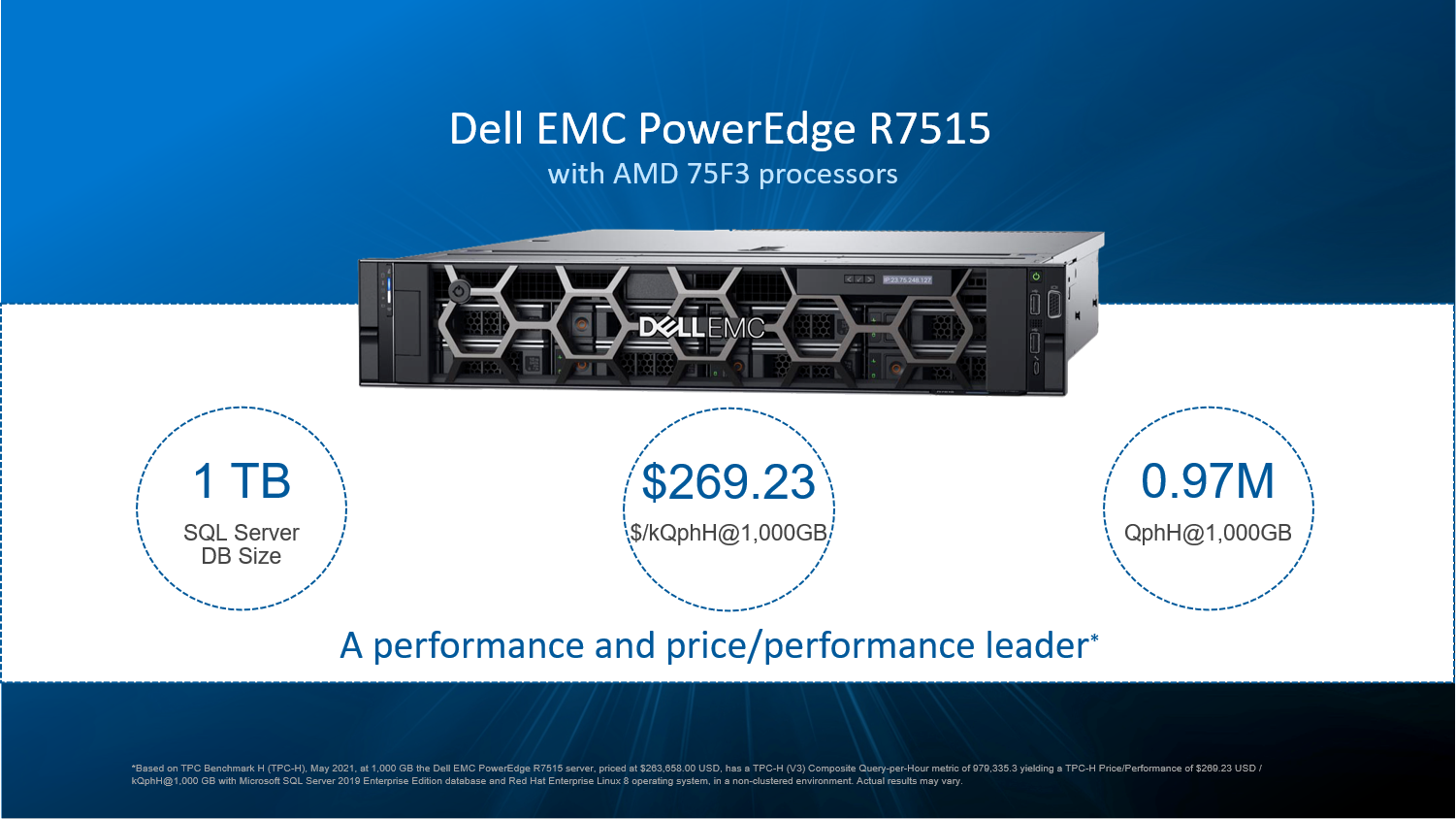 While modernizing your data center there are two very important considerations every organization must make. The first is the price of new hardware and the other is how will it perform.

The latest powerful AMD 75F3 processors change the economics of the datacenter for the better. The Dell EMC PowerEdge R7515(2U) server, with the AMD processors, delivers the balanced I/O, memory, and computing capacity needed for large-scale analytical and business intelligence applications.

The latest generation PowerEdge R7515 servers mean organizations will not have to compromise neither on performance nor cost and instead focus on realizing their IT and digital business potentials. Independent tpc.org auditing has demonstrated that these servers are top rated in performance and price/performance for @ 1,000GB scale factor Microsoft SQL Server 2019 Enterprise database with Red Hat Enterprise Linux 8 operating system in a non-clustered environment.[1] Powered by 3rd generation AMD® EPYC™ processors, these servers are capable of handling demanding workloads and applications, such as data warehouses, ecommerce, databases. For more details about Dell servers please visit the Dell website. 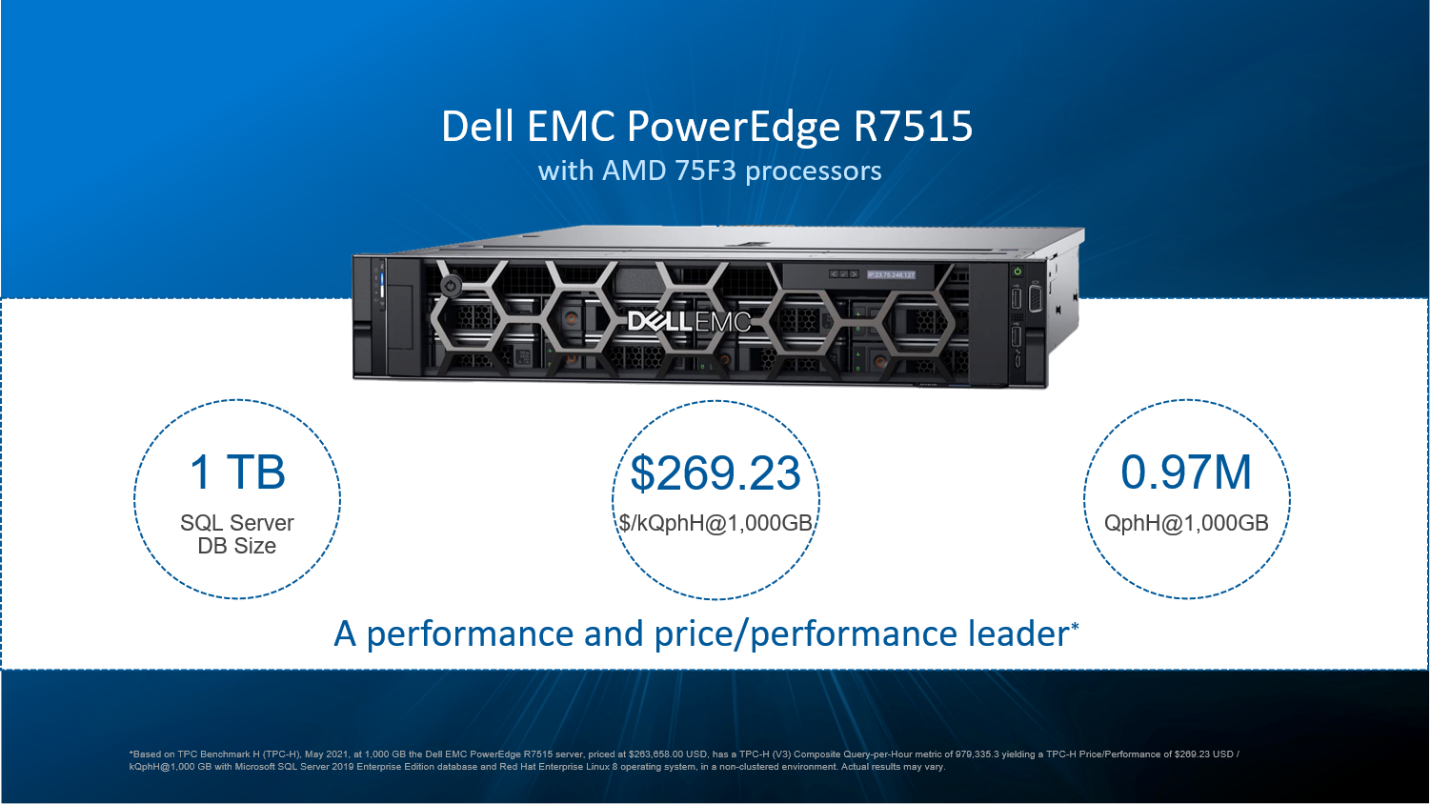 The AMD EPYC™ 7003 Series Processors are built with leading-edge Zen 3 core, and AMD Infinity Architecture. The AMD EPYC™ SoC offers a consistent set of features across 8 to 64 cores. Each 3rd Gen AMD EPYC processor consists of up to eight Core Complex Die CCD) and an I/O Die (IOD). 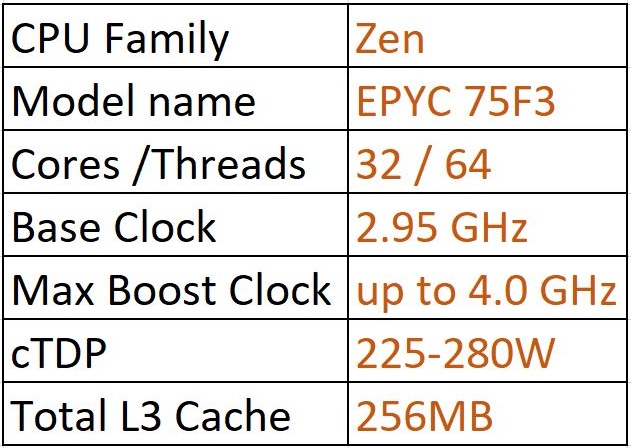 You can visit the FDR report for additional information on the benchmark configuration.

RUN 1 is the first run following the load test. Run 2 is the run following Run 1. Below are the RUN1 and RUN2 results. For more detailed information please go through the FDR report.

Dell Technologies solutions simplify the deployment, integration and management of Microsoft data platform environments and accelerate time-to-value for better service delivery and business innovation. With a broad infrastructure portfolio and a long-standing partnership with Microsoft, we provide the innovative solutions that reduce complexity and enable you to solve today’s challenges, no matter where you are in your transformation journey.

In addition, Dell Technologies offers a portfolio of other rack servers, tower servers, and modular infrastructure that can be configured to accelerate most any business workload. For more details about Dell Technologies Solutions for Microsoft SQL please visit https://www.delltechnologies.com/sql 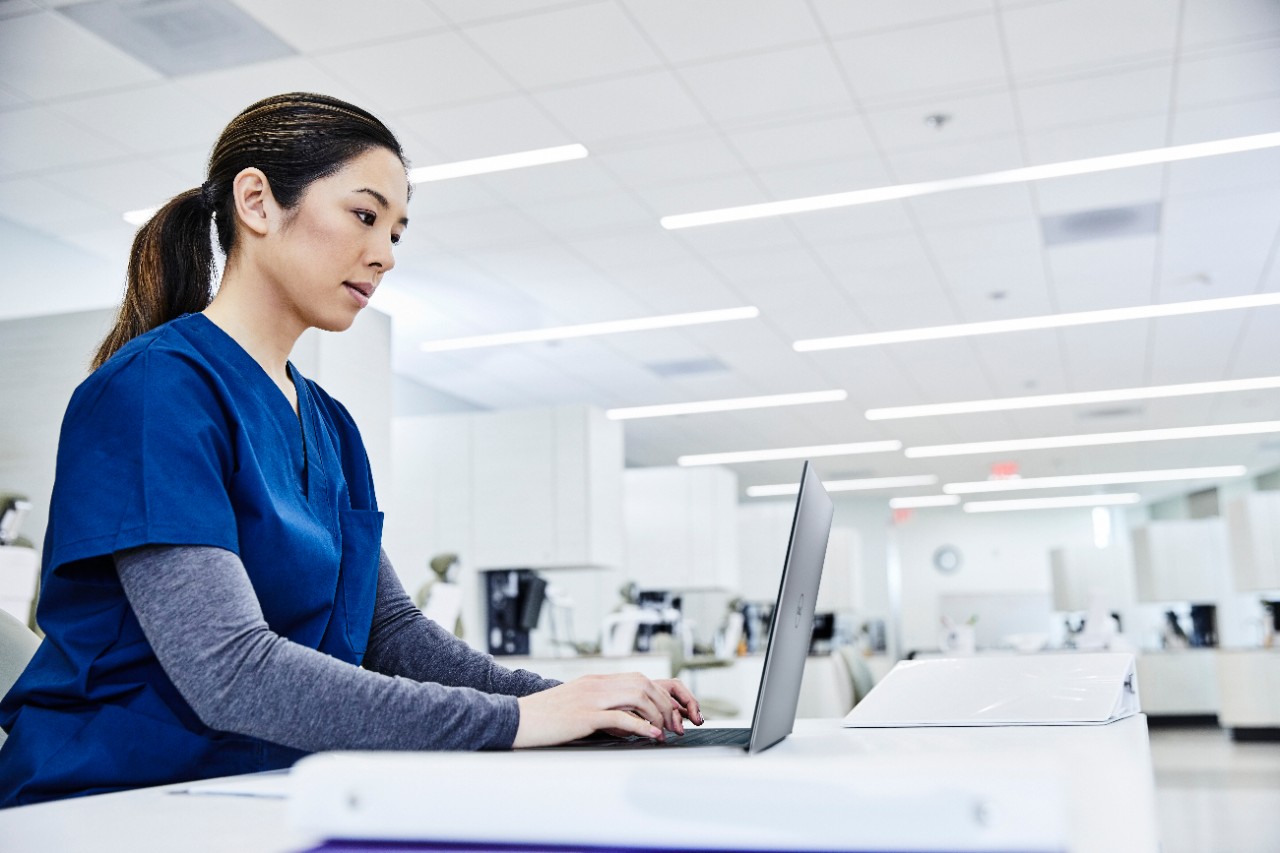 The Dell EMC HPC and AI Innovation Lab has been evaluating these new processors with Dell EMC’s latest 15G PowerEdge servers and will report our initial findings for the molecular dynamics (MD) application GROMACs in this blog.

Given the enormous health impact of the ongoing COVID-19 pandemic, researchers and scientists are working closely with the HPC and AI Innovation Lab to obtain the appropriate computing resources to improve the performance of molecular dynamics simulations. Of these resources, GROMACS is an extensively used application for MD simulations. It has been evaluated with the standard datasets by combining the latest AMD EPYC Milan processor (based on Zen 3 cores) with Dell EMC PowerEdge servers to get most out of the MD simulations.

In a previous blog, Molecular Dynamic Simulation with GROMACS on AMD EPYC- ROME, we published benchmark data for a GROMACS application study on a single node and multinode with AMD EPYC ROME based Dell EMC servers.

The results featured in this blog come from the test bed described in the following table. We performed a single-node and multi-node application study on Milan processors, using the latest AMD stack shown in Table 1, with GROMACS 2020.4 to understand the performance improvement over the older generation processor (Rome).

The following information describes the performance evaluation for the processor stack listed in the Table 1.

For performance benchmark comparisons, we selected Rome processors that are closest to their Milan counterparts in terms of hardware features such as cache size, TDP values, and Processor Base/Turbo Frequency, and marked the maximum value attained for Ns/day by each of the datasets mentioned in Table 2.

Figure 1 shows a 32C Milan processor has higher performance improvements (19 percent for water 1536, 21 percent for water 3072, and 10 to approximately 12 percent with HECBIO sim and lingo cellulose datasets) compared to a 32C Rome processor. This result is due to a higher processor speed and improved L3 cache, wherein more data can be accessed by each core.

Next, with the higher end processor we see only 10 percent gain with respect to the water dataset, as they are more memory intensive. Some percentage is added on due to improvement of frequency for the remaining datasets. Overall, the Milan processor results demonstrated a substantial performance improvement for GROMACS over Rome processors.

We recommend that you compare the price-to-performance ratio before choosing the processor based on the datasets with higher CPU core frequency, as the processors with a higher number of lower-frequency cores may provide better total performance.

For multi-node tests, the test bed was configured with an NVIDIA Mellanox HDR interconnect running at 200 Gbps and each server included an AMD EPYC 7713 processor. We achieved the expected linear performance scalability for GROMACS of up to four nodes and across each of the datasets. All cores in each server were used while running the benchmarks. The performance increases are close to linear across all the dataset types as core count increases.

For the various datasets we evaluated, GROMACS exhibited strong scaling and was compute intensive. We recommend a processor with high core count for smaller datasets (water 1536, hec 1400); larger datasets (water 3072, ligno,HEC 3000) would benefit from memory per core. Configuring the best BIOS options is important to get the best performance out of the system.

For more information and updates, follow this blog site.