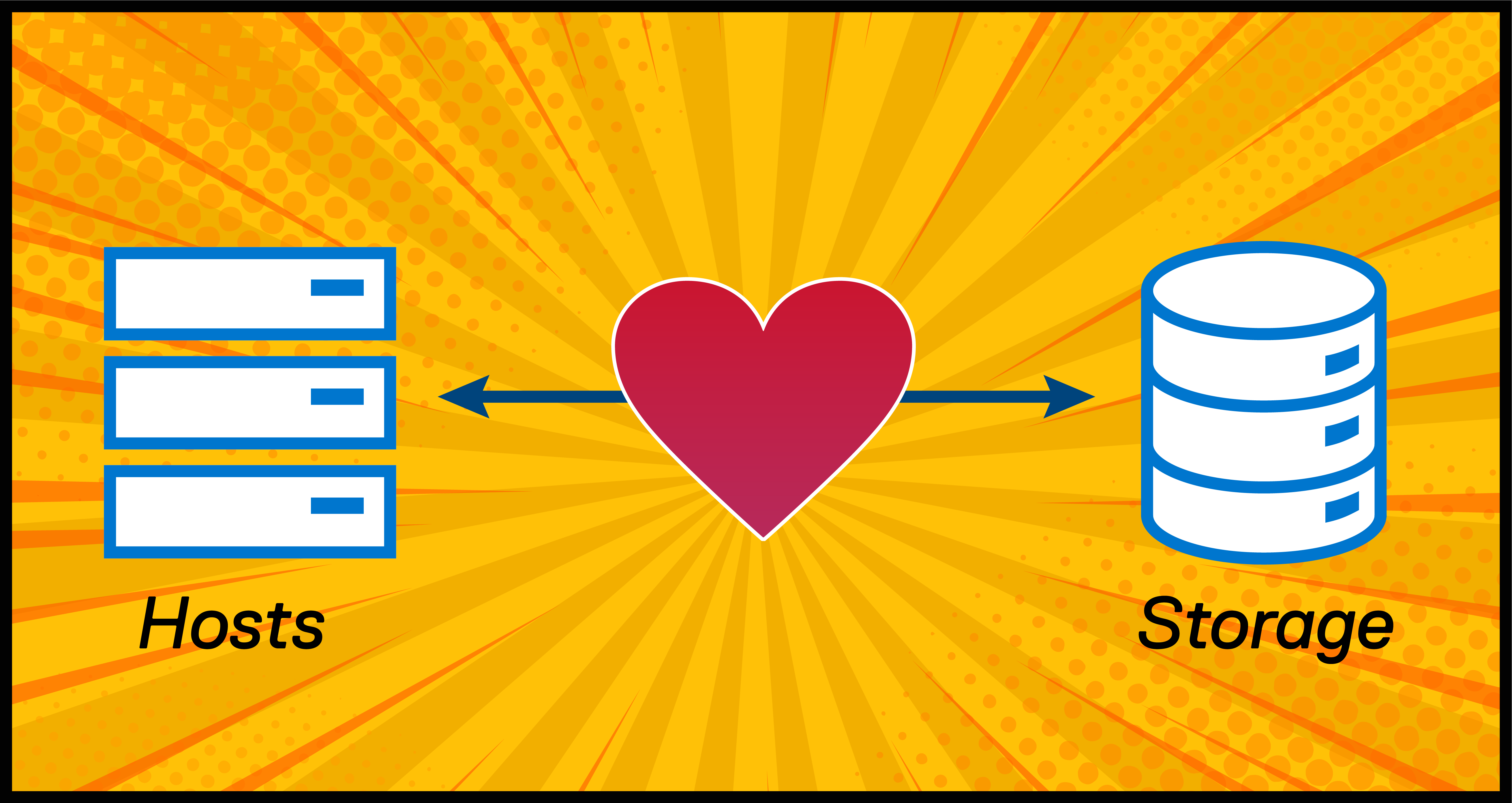 Did you know that online dating started in 1959 using a mainframe computer with punch cards? Of course, it has come a long way since then, and now, even Dell Technologies has created a dating app. But it’s not for lonely hearts; it’s for NVMe/TCP servers and storage!

Over the last few years, a new storage networking technology has emerged: NVMe/TCP. This new specification gives us a Fibre Channel-like experience over an IP network. But what happens when servers and storage (aka endpoints) come online and wish to meet like-minded NVMe/TCP individuals in their area? Alone and lost in the Ether(net), they wait to be set up with a friend of a friend who, hopefully, speaks the same language, is a good listener, and maybe even has a GSOH? Or they could just register with Dell SmartFabric Storage Software!

NVMe/TCP endpoints register with the Centralized Discovery Controllers (CDCs) in the SFSS virtual machine.  Here’s how it will work:

Compatible endpoints look for a CDC by sending out multicast DNS queries. Once the CDCs in SFSS have responded, the endpoints register by sending their name and dating profile, or “Log Page.” For endpoints that operate according to specifications TP-8009 and TP-8010, the discovery and registration process will be fully automated.

Next, we need a “match-maker.” The SFSS administrator will add hosts and storage to zones so that they reach out to each other directly.

The hosts are now able to connect and access the storage over high speed ethernet.

Here’s where it gets a bit awkward…

If, like me, you come from an application networking background, you’re used to setting up a network that gets a packet from A to B. However, with storage networking, we need a network that gets packets from A1 and A2, to B1, B2, B3, and B4. “Multi-pathing” is key! Storage networking is rather promiscuous compared to application networking! And, if you’re from a storage networking background, you might be thinking, “But what about single-initiator and single-target zoning?” Well, that’s not best practice either anymore. Once zoning is configured, hosts will connect with all accessible subsystems in the zone for optimal resiliency.

The people who designed NVMe/TCP took the lessons they learned from Fibre-Channel and applied them wisely. In FC, the convention is to deploy switches that will only bridge traffic between hosts and storage. Storage networks favor resiliency over redundancy, creating multiple active paths instead of creating idle paths ready to take over in the event of a failure.

We cover network planning in detail in the SmartFabric Storage Software Deployment Guide, but here are some highlights. 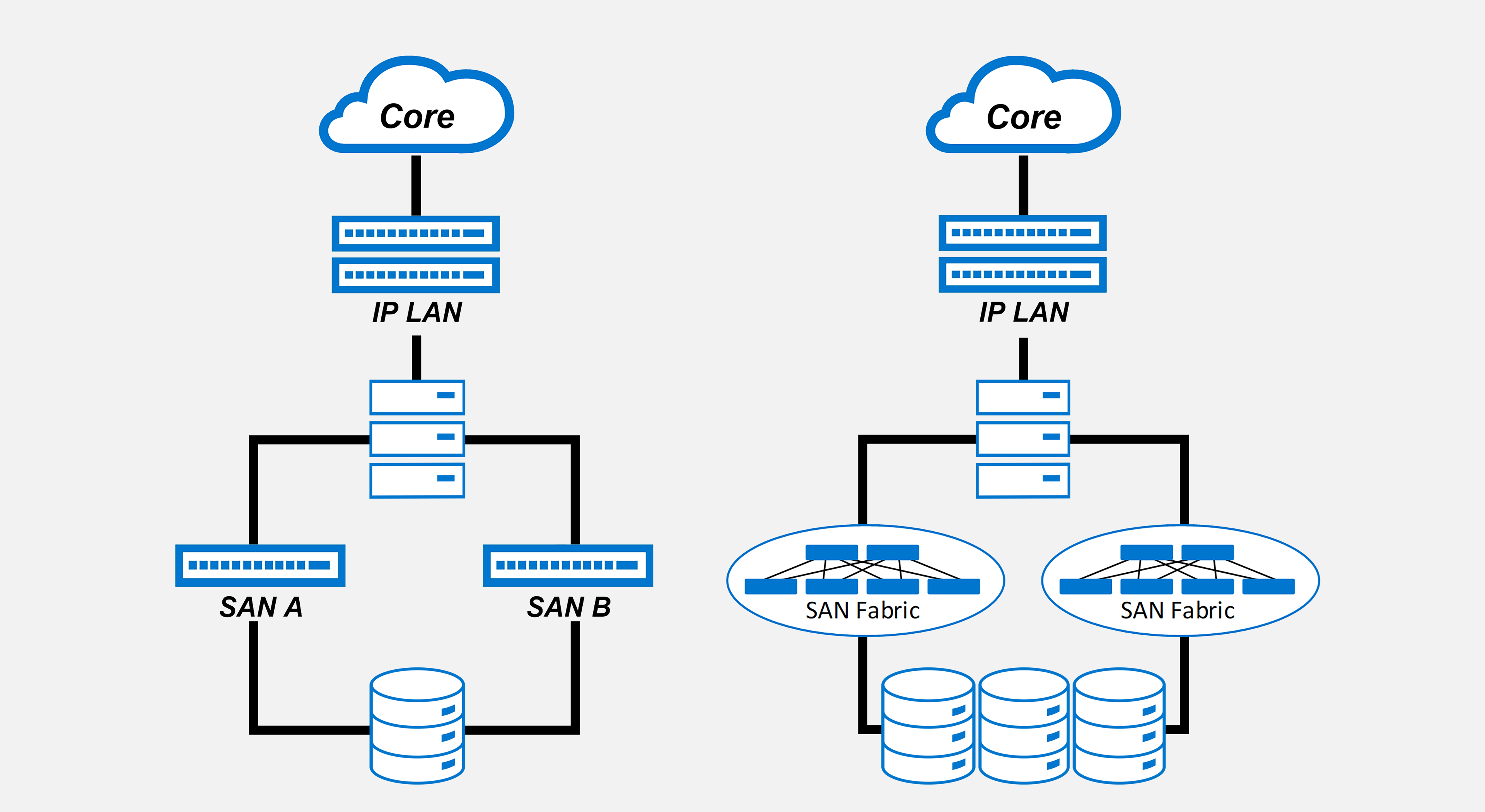 It’s possible to use the same switches for application and NVMe/TCP storage traffic (we call this the converged topology), but we must plan carefully to prevent congestion spreading and Incast. After all, we don’t want anything to get in the way of true love!

The only way is up for NVMe/TCP. Ethernet speeds are increasing and becoming more affordable, and application developers will focus on software that can take full advantage of easier access to large amounts of data. We will see Dell and other vendors including TP-8009 and TP-8010 functionality in their products so that they may take part in the revolution.

For more help with planning your network for SFSS for NVMe/TCP, check out the Network Planning section in the  SmartFabric Storage Software Deployment Guide.

Keep an eye out for new compatible endpoints appearing on the Dell Networking Support & Interoperability Matrix.

If you’d like to try configuring SFSS for yourself, take our Interactive Demo for a test drive!

Special thanks to Erik Smith, Heather Morgan, and Alex Loy. 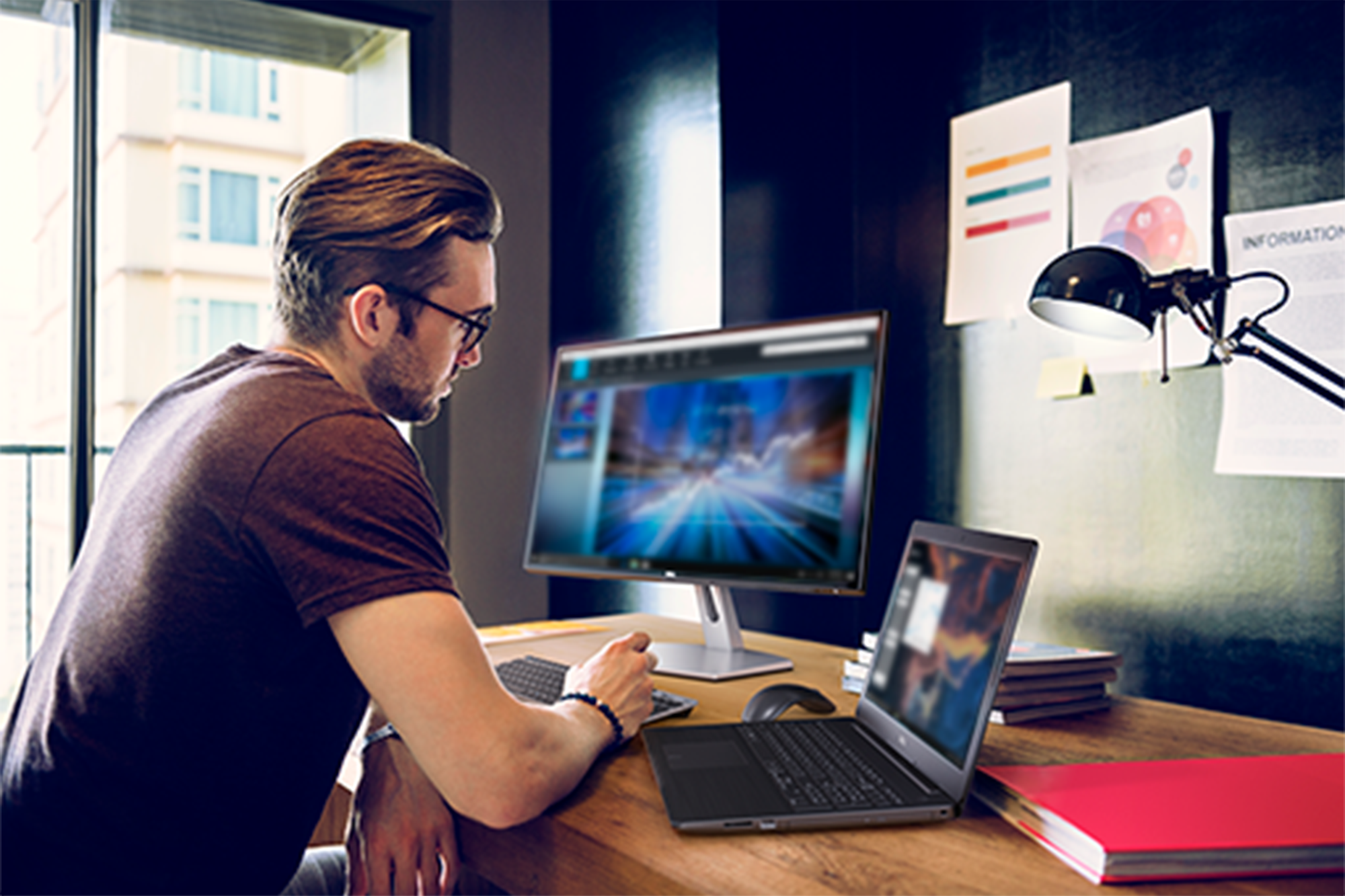 Why SmartFabric Services with PowerStore?

With Dell Technologies’ integrated PowerSwitch portfolio and SmartFabric Services (SFS), we offer a holistic Dell on Dell solution, that is easier than ever to automate networking as an extension of the modern infrastructure solutions offered by Dell Technologies, making difficult networking a thing of the past.

Dell EMC SmartFabric Services enables an end to end automated fabric with up to 98% of the tasks automated offering simplicity and agility towards day 2 network operations for cluster and network expansion. The single pane of management with VMware vCenter allows users to operate and perform life cycle management of one or more fabrics from within VMware vCenter.

In this example, I will demonstrate how to enable SFS and use the Open Manage Network Integration (OMNI) ova tool to onboard a PowerStore X appliance onto the SmartFabric.

The first step in the process is to make the necessary connections. In the following example, a single PowerStore X appliance connected to a pair of Dell EMC PowerSwitch S5248F-ON switches. There is a connection from each PowerStore node in the appliance to the OOB Management network which allows us to manage the Fabric and use the PowerStore Remote Discovery Tool for initial deployment. 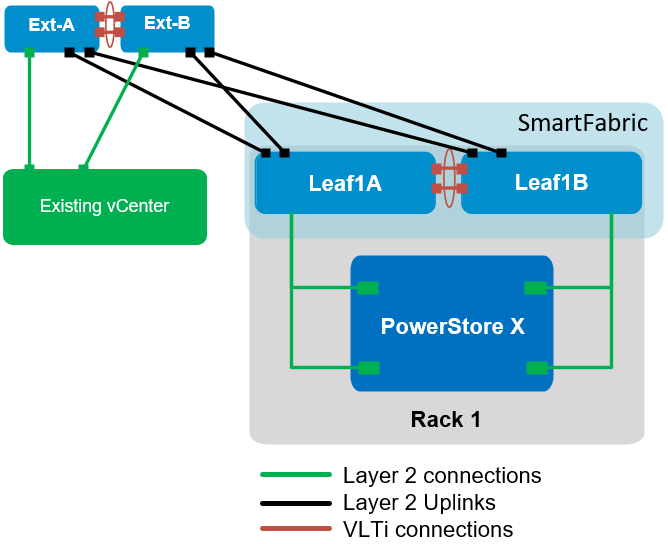 Use the following sequence to configure the management interface and enable SmartFabric mode.

Once SFS is enabled, the switch will reboot and come back up in SmartFabric mode. Next, the OMNI ova is installed onto an existing vCenter. This allows us to create the necessary uplink, networks, and onboard the PowerStore X onto our SmartFabric.

Also, OMNI provides us with an additional benefit in that it will orchestrate day 2 automation. OMNI will be registered with both the SmartFabric and the vCenter. When a change is made to the VDS, such as a port group creation or modification, the corresponding network is created/modified on the Fabric and the associated interfaces configured for those networks. OMNI orchestrates this by monitoring vCenter tasks and then uses REST API calls to make the associated changes on the SmartFabric.

The next step is to go to OMNI and select the Server Interface tab. 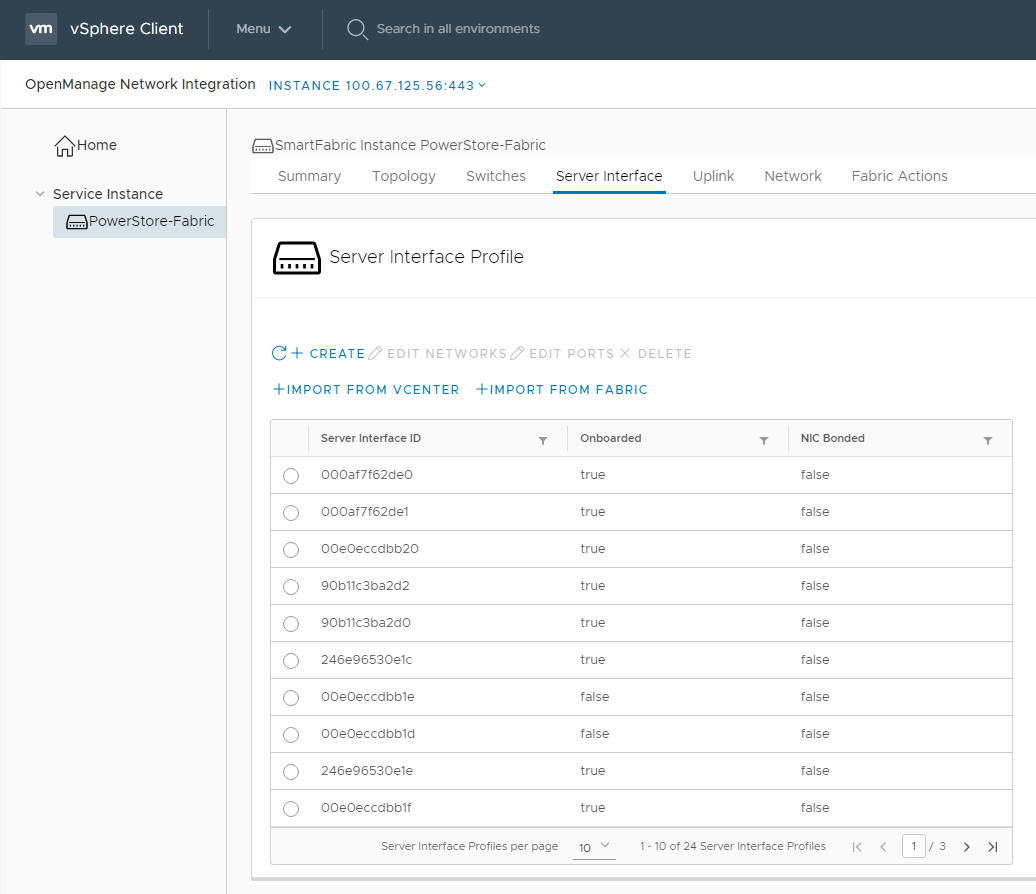 Once the +Import From Fabric option is chosen the PowerStore interfaces are dynamically discovered and presented to the user.

Select the specific PowerStore interfaces and first add a server profile with the +Add to Server Profile option. Once this is complete, choose the +Add Networks option to apply the required networks (Mgmt, vMotion, Storage, and if necessary Remote-Discovery). 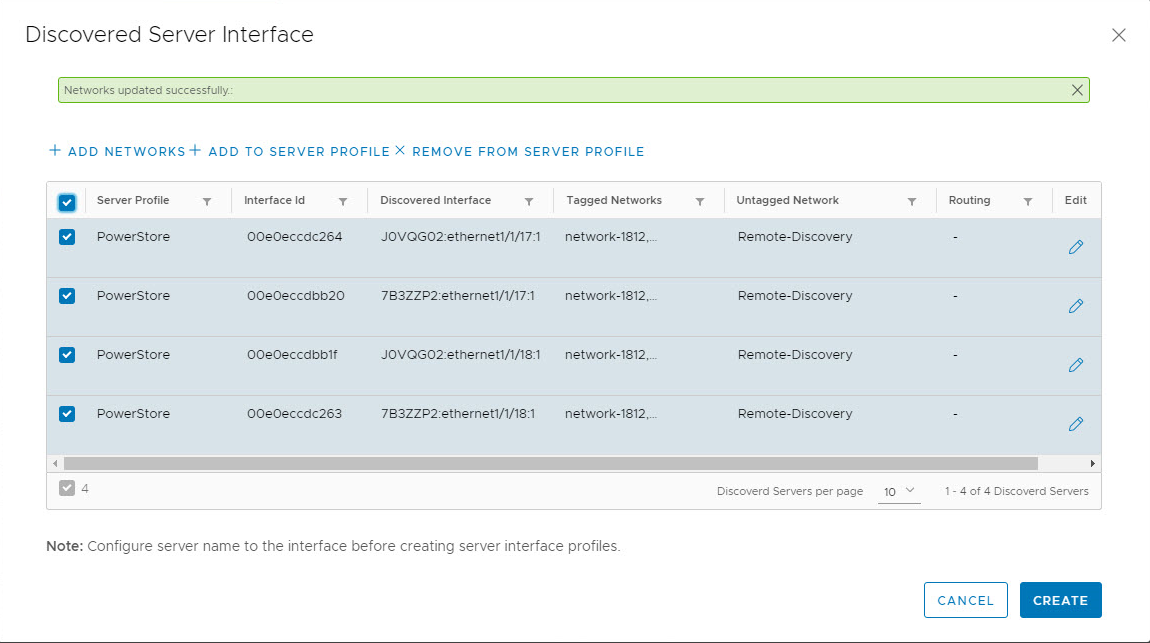