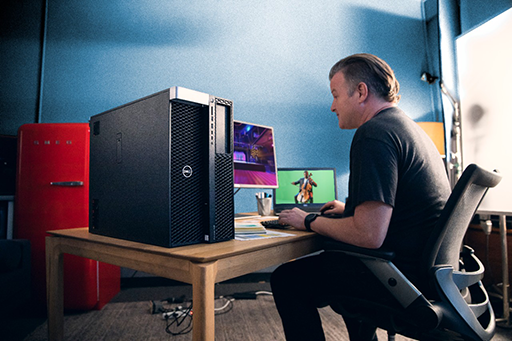 Well-managed companies are always looking for new ways to increase efficiency and reduce costs while maintaining excellence in the quality of their products and services. Hence, IT departments and service providers look at the cloud and Application Programming Interfaces (APIs) as the enablers for automation, driving efficiency, consistency, and cost-savings.

This blog helps you get started with VxRail API by grouping the most useful VxRail API resources available from various public sources in one place. This list of resources is updated every few months. Consider bookmarking this blog as it is a useful reference.

Before jumping into the list, it is essential to answer some of the most obvious questions:

What is VxRail API?

VxRail API is a feature of the VxRail HCI System Software that exposes management functions with a RESTful application programming interface. It is designed for ease of use by VxRail customers and ecosystem partners who want to better integrate third-party products with VxRail systems. VxRail API is:

Why is VxRail API relevant?

VxRail API enables you to use the full power of automation and orchestration services across your data center. This extensibility enables you to build and operate infrastructure with cloud-like scale and agility. It also streamlines the integration of the infrastructure into your IT environment and processes. Instead of manually managing your environment through the user interface, the software can programmatically trigger and run repeatable operations.

More customers are embracing DevOps and Infrastructure as Code (IaC) models because they need reliable and repeatable processes to configure the underlying infrastructure resources that are required for applications. IaC uses APIs to store configurations in code, making operations repeatable and greatly reducing errors.

How can I start? Where can I find more information?

To help you navigate through all available resources, I grouped them by level of technical difficulty, starting with 101 (the simplest, explaining the basics, use cases, and value proposition), through 201, up to 301 (the most in-depth technical level). 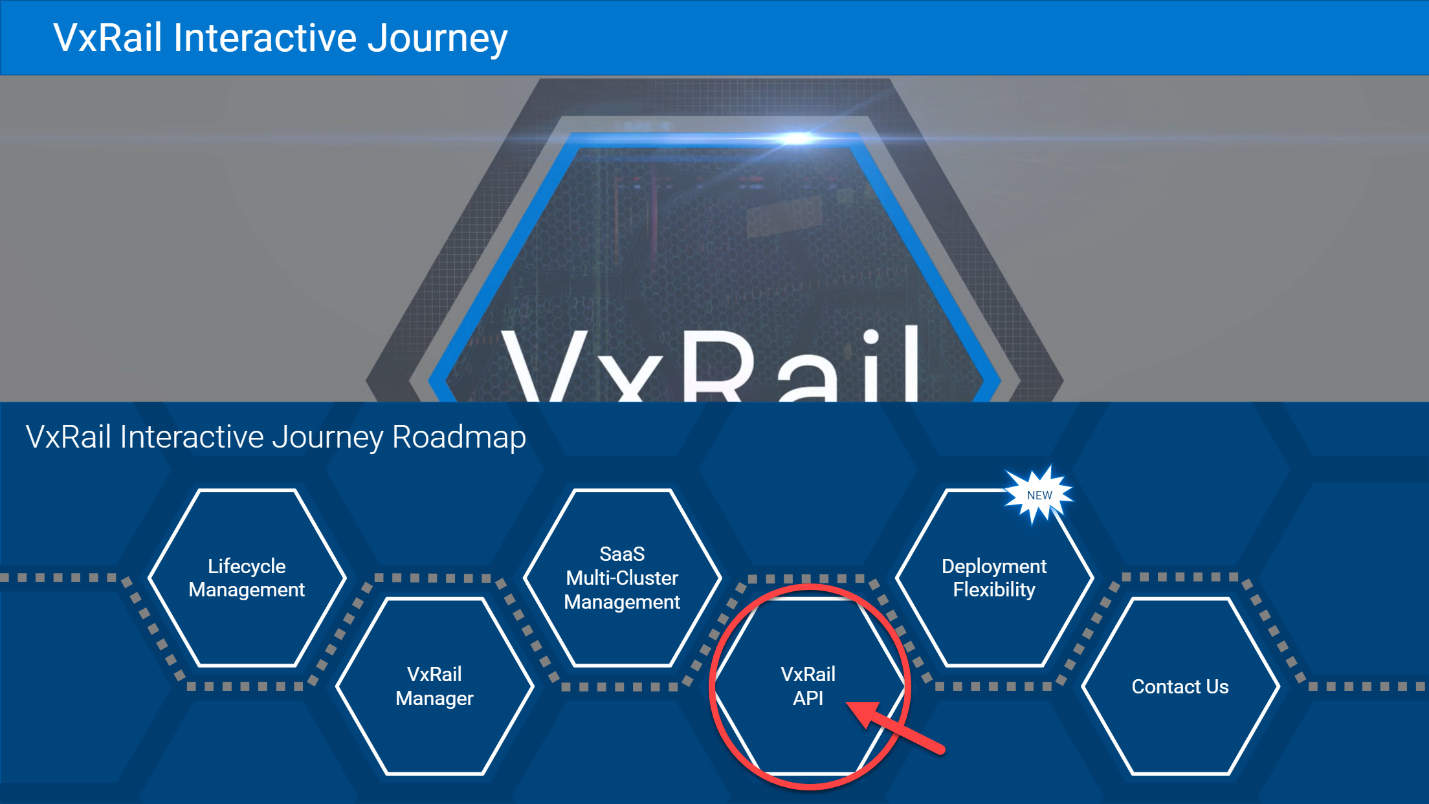 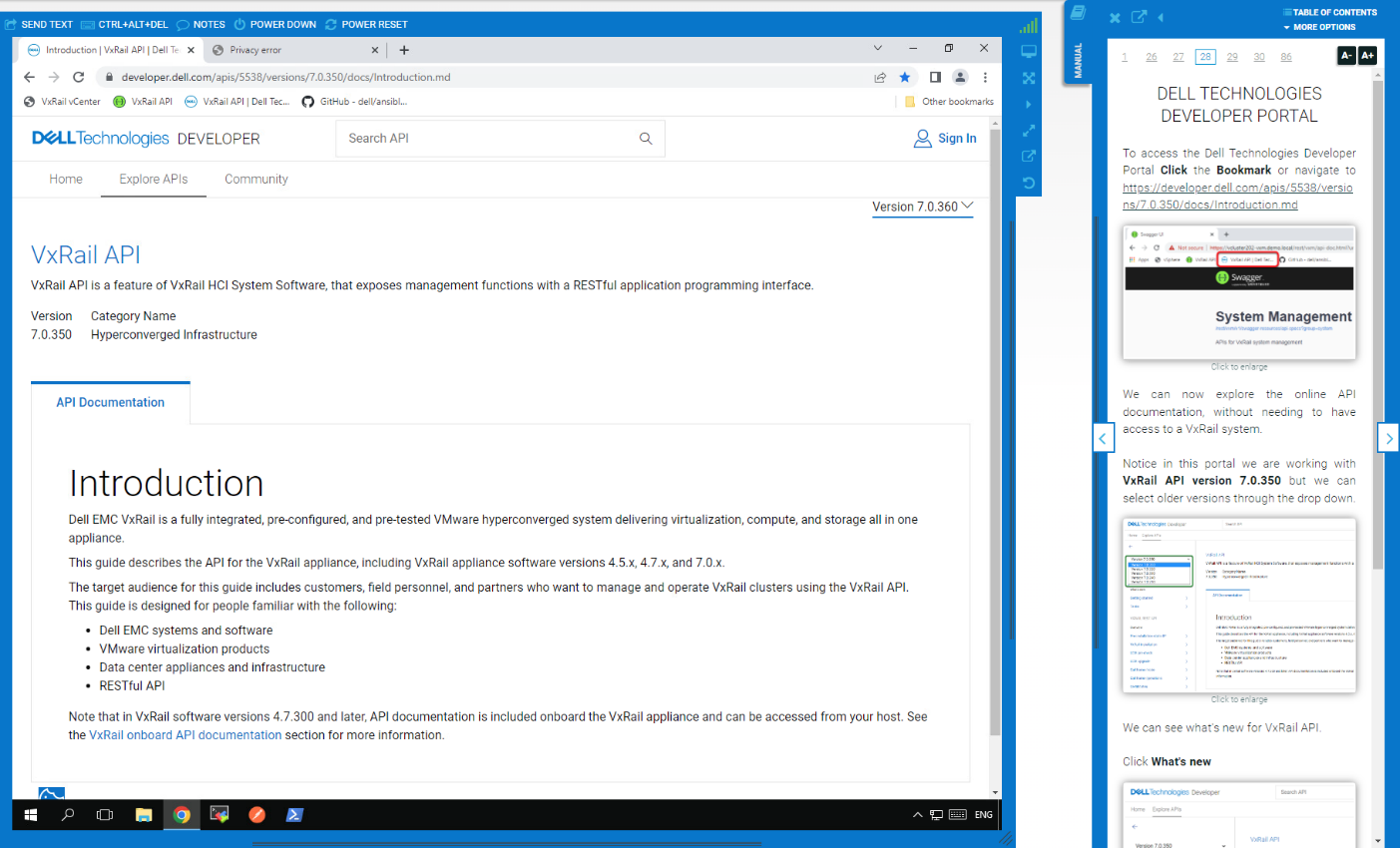 Note: If you’re a customer, you will need to ask your Dell or partner account team to create a session for you and a hyperlink to get the access to this lab. 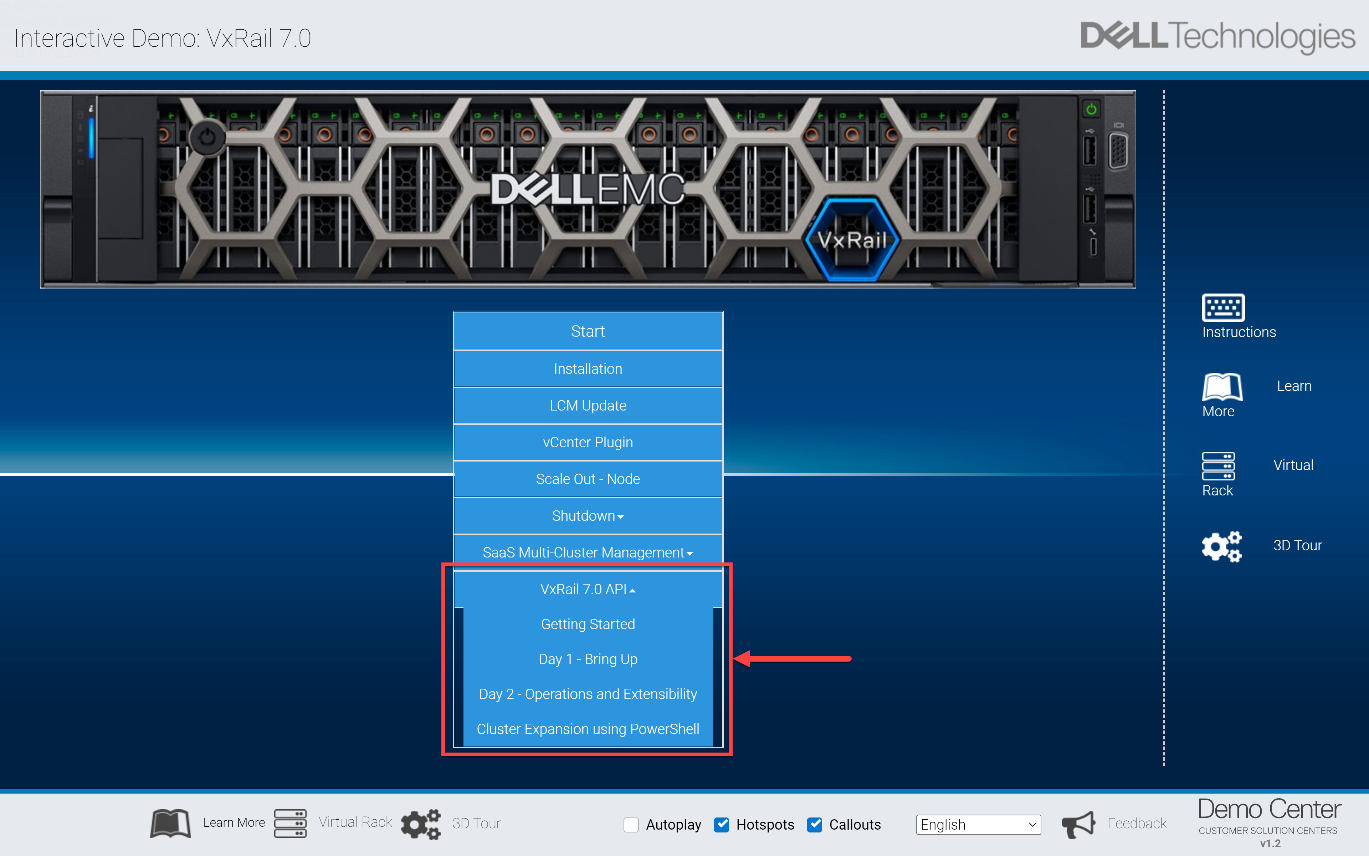 I hope you find this list useful. If so, make sure that you bookmark this blog for your reference. I will update it over time to include the latest collateral.

Enjoy your Infrastructure as Code journey with the VxRail API! 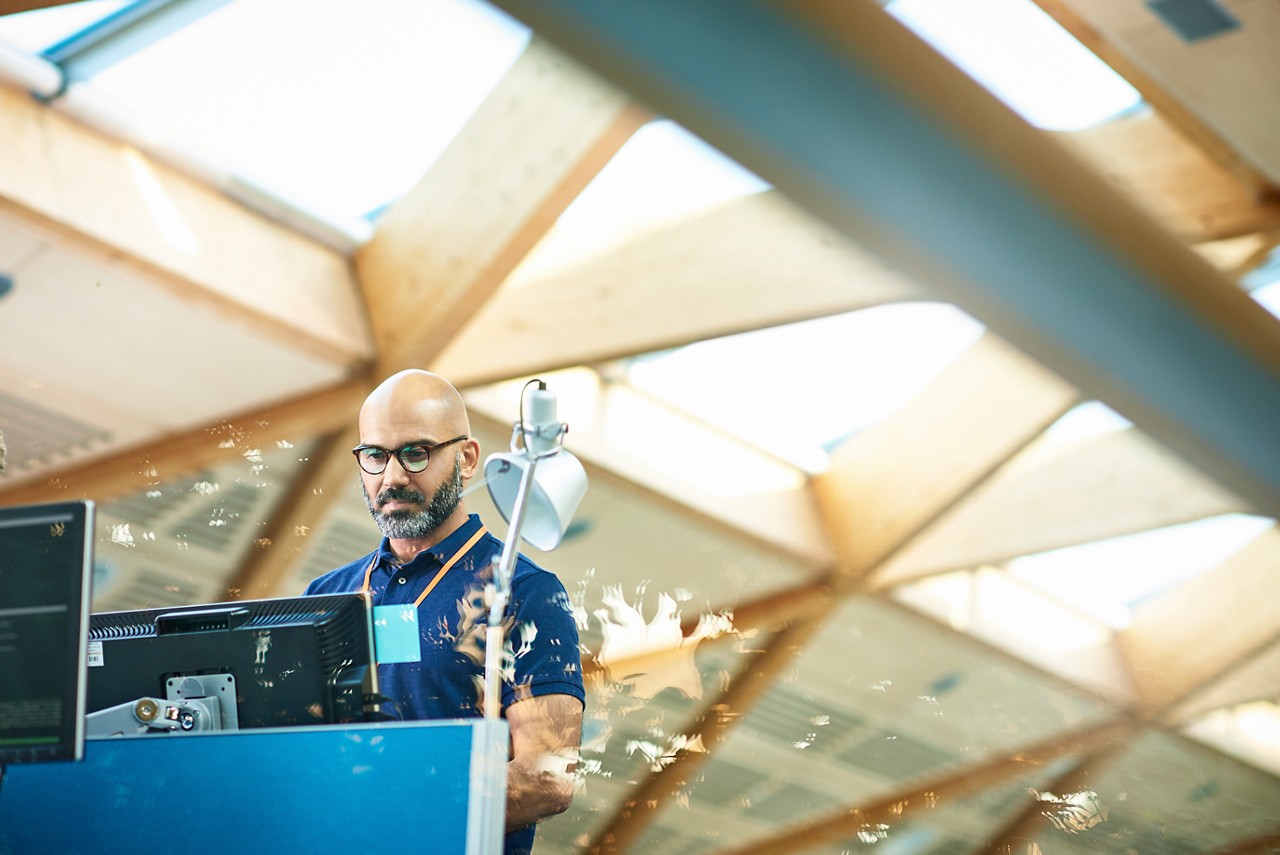 Many customers are looking at Infrastructure as Code (IaC) as a better way to automate their IT environment, which is especially relevant for those adopting DevOps. However, not many customers are aware of the capability of accelerating IaC implementation with VxRail, which we have offered for some time already—Ansible Modules for Dell VxRail.

What is it? It's the Ansible collection of modules, developed and maintained by Dell, that uses the VxRail API to automate VxRail operations from Ansible.

By the way, if you're new to the VxRail API, first watch the introductory whiteboard video available on YouTube.

Ansible Modules for Dell VxRail are well-suited for IaC use cases. They are written in such a way that all requests are idempotent and hence fault-tolerant. This means that the result of a successfully performed request is independent of the number of times it is run.

Besides that, instead of just providing a wrapper for individual API functions, we automated holistic workflows (for instance, cluster deployment, cluster expansion, LCM upgrade, and so on), so customers don't have to figure out how to monitor the operation of the asynchronous VxRail API functions.  These modules provide rich functionality and are maintained by Dell; this means we're introducing new functionality over time. They are already mature—we recently released version 1.4.

Finally, we are also reducing the risk for customers willing to adopt the Ansible modules in their environment, thanks to the community support model, which allows you to interact with the global community of experts. From the implementation point of view, the architecture and end-user experience are similar to the modules we provide for Dell storage systems.

Ansible Modules for Dell VxRail are available publicly from the standard code repositories: Ansible Galaxy and GitHub. You don't need a Dell Support account to download and start using them.

The requirements for the specific version are documented in the "Prerequisites" section of the description/README file.

In general, you need a Linux-based server with the supported Ansible and Python versions. Before installing the modules, you have to install a corresponding, lightweight Python SDK library named "VxRail Ansible Utility," which is responsible for the low-level communication with the VxRail API. You must also meet the minimum version requirements for the VxRail HCI System Software on the VxRail cluster.

This is a summary of requirements for the latest available version (1.4.0) at the time of writing this blog:

You can install the SDK library by using git and pip commands. For example:

Then you can install the collection of modules with this command:

After the successful installation, we're ready to test the modules and communication between the Ansible automation server and VxRail API.

I recommend performing that check with a simple module (and corresponding API function) such as dellemc_vxrail_getsysteminfo, using GET /system to retrieve VxRail System Information.

Let's have a look at this example (you can find the source code on GitHub): 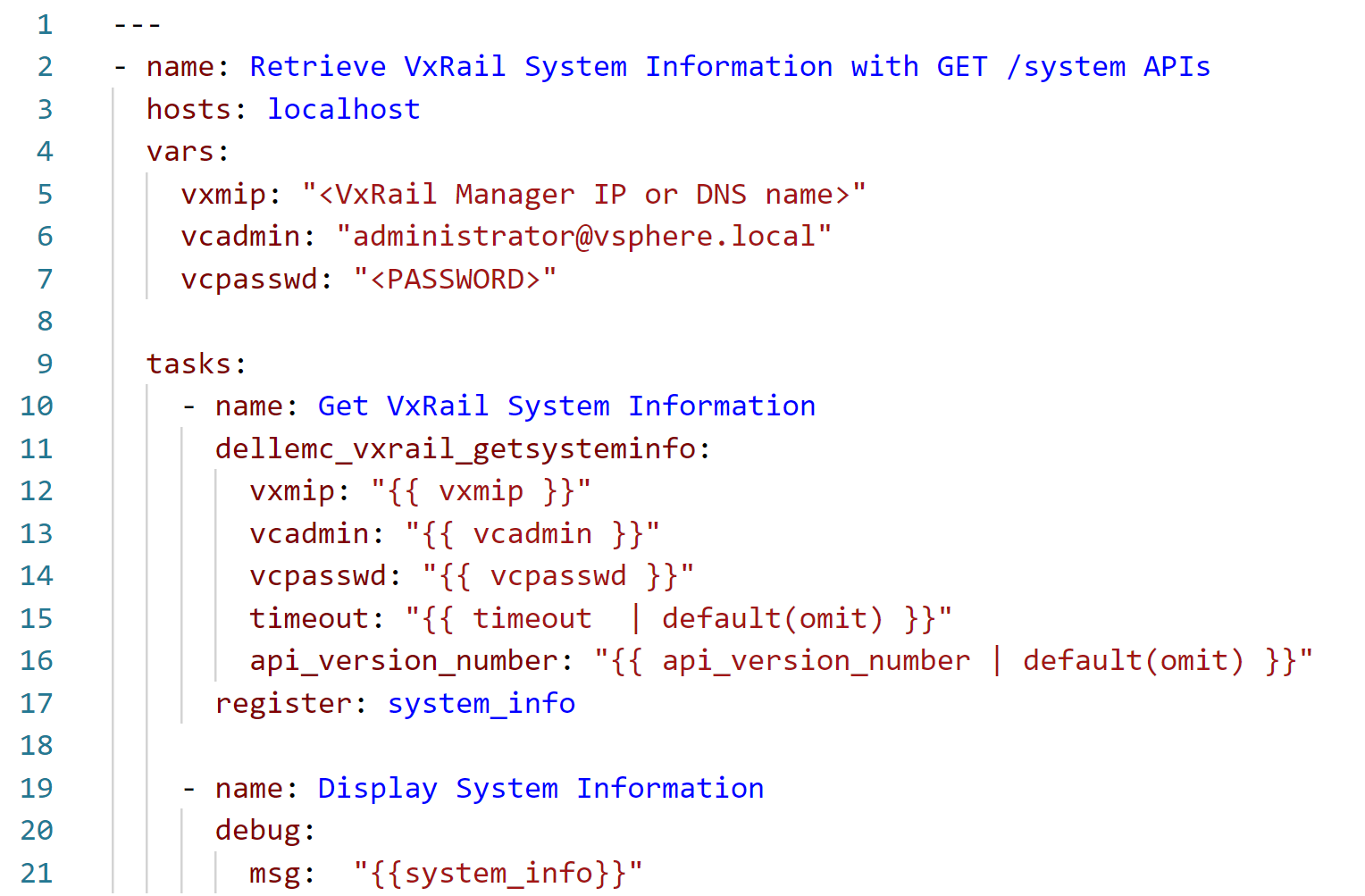 Note that this playbook is run on a local Ansible server (localhost), which communicates with the VxRail API running on the VxRail Manager appliance using the SDK library. In the vars section, , we need to provide, at a minimum, the authentication to VxRail Manager for calling the corresponding API function. We could move these variable definitions to a separate file and include the file in the playbook with vars_files. We could also store sensitive information, such as passwords, in an encrypted file using the Ansible vault feature. However, for the simplicity of this example, we are not using this option.

After running this playbook, we should see output similar to the following example (in this case, this is the output from the older version of the module): 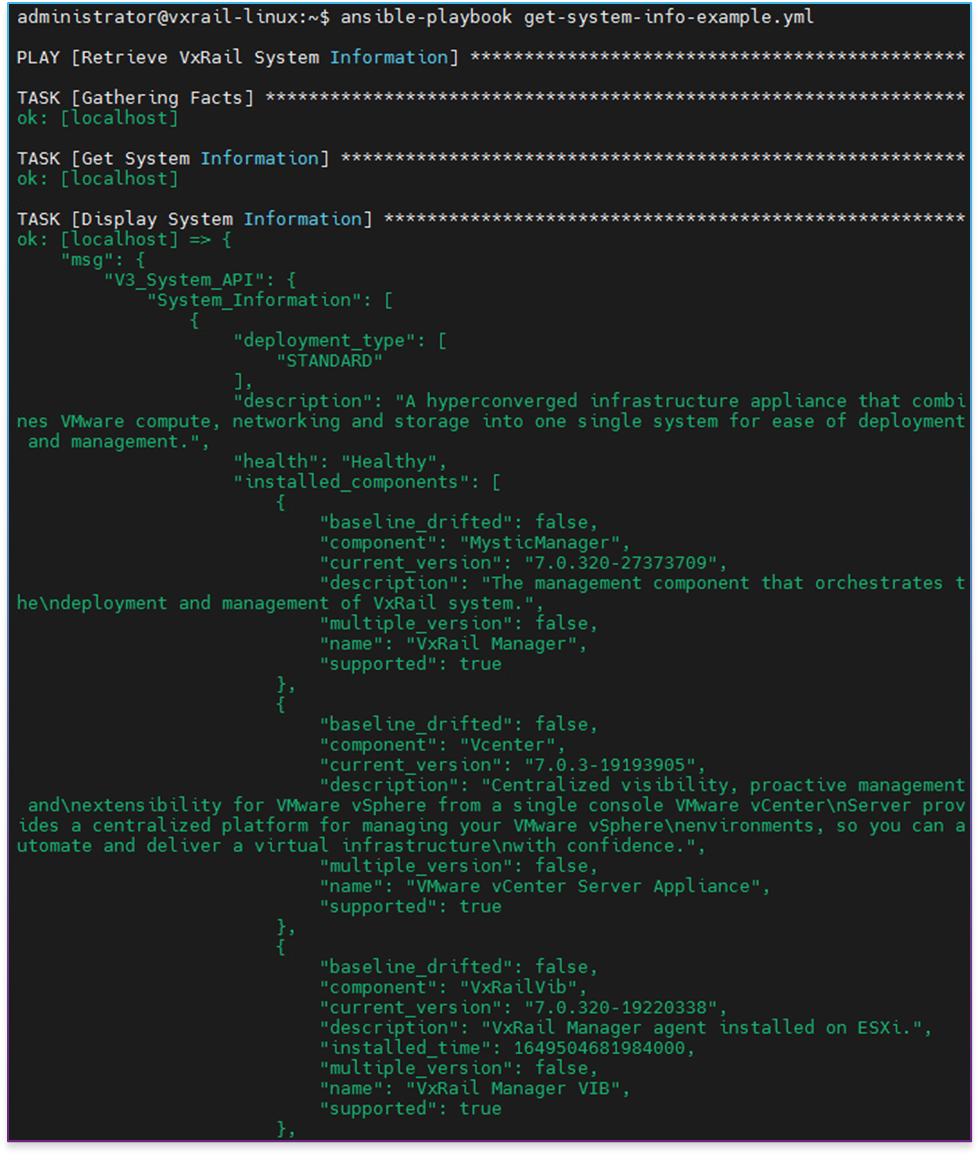 Now let's have a look at a bit more sophisticated, yet still easy-to-understand, example. A typical operation that many VxRail customers face at some point is cluster expansion. Let's see how to perform this operation with Ansible (the source code is available on GitHub): 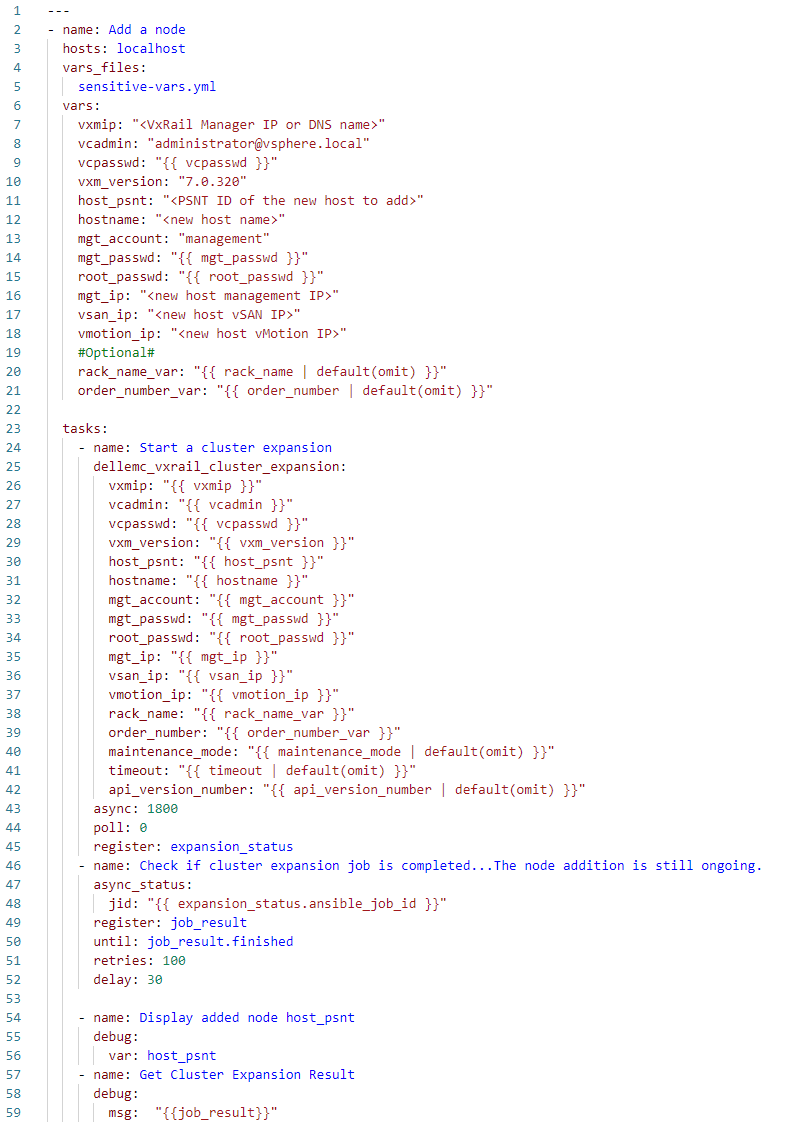 In this case, I've exported the definitions of the sensitive variables, such as vcpasswd, mgt_passwd, and root_passwd, into a separate, encrypted Ansible vault file, sensitive-vars.yml, to follow the best practice of not storing them in the clear text directly in playbooks.

As you can expect, besides the authentication, we need now to provide more parameters—configuration of the newly added host—defined in the vars section. We select the new host from the pool of available hosts, using the PSNT identifier (host_psnt variable).

This is an example of an operation performed by an asynchronous API function. Cluster expansion is not something that is completed immediately but takes minutes. Therefore, the progress of the expansion is monitored in a loop until it finishes or the number of retries is passed. If you communicated with the VxRail API directly by using the URI module from your playbook, you would have to take care of such monitoring logic on your own; here, you can use the example we provide.

You can watch the operation of the cluster expansion Ansible playbook with my commentary in this demo:

The primary source of information about the Ansible Modules for Dell VxRail is the documentation available on GitHub. There you'll find all the necessary details on all currently available modules, a quick description, supported endpoints (VxRail API functions used), required and optional parameters, return values, and location of the log file (modules have built-in logging feature to simplify troubleshooting— logs are written in the /tmp directory on the Ansible automation server). The GitHub documentation also contains multiple samples showing how to use the modules, which you can easily clone and adjust as needed to the specifics of your VxRail environment.

There's also built-in documentation for the modules, accessible with the ansible-doc command.

Finally, the Dell Automation Community is a public discussion forum where you can post your questions and ask for help as needed.

I hope you now understand the Ansible Modules for Dell VxRail and how to get started. Let me quickly recap the value proposition for our customers. The modules are well-suited for IaC use cases, thanks to automating holistic workflows and idempotency. They are maintained by Dell and supported by the Dell Automation Community, which reduces risk. These modules are much easier to use than the alternative of accessing the VxRail API on your own. We provide many examples that can be adjusted to the specifics of the customer’s environment.

To learn more, see these resources: 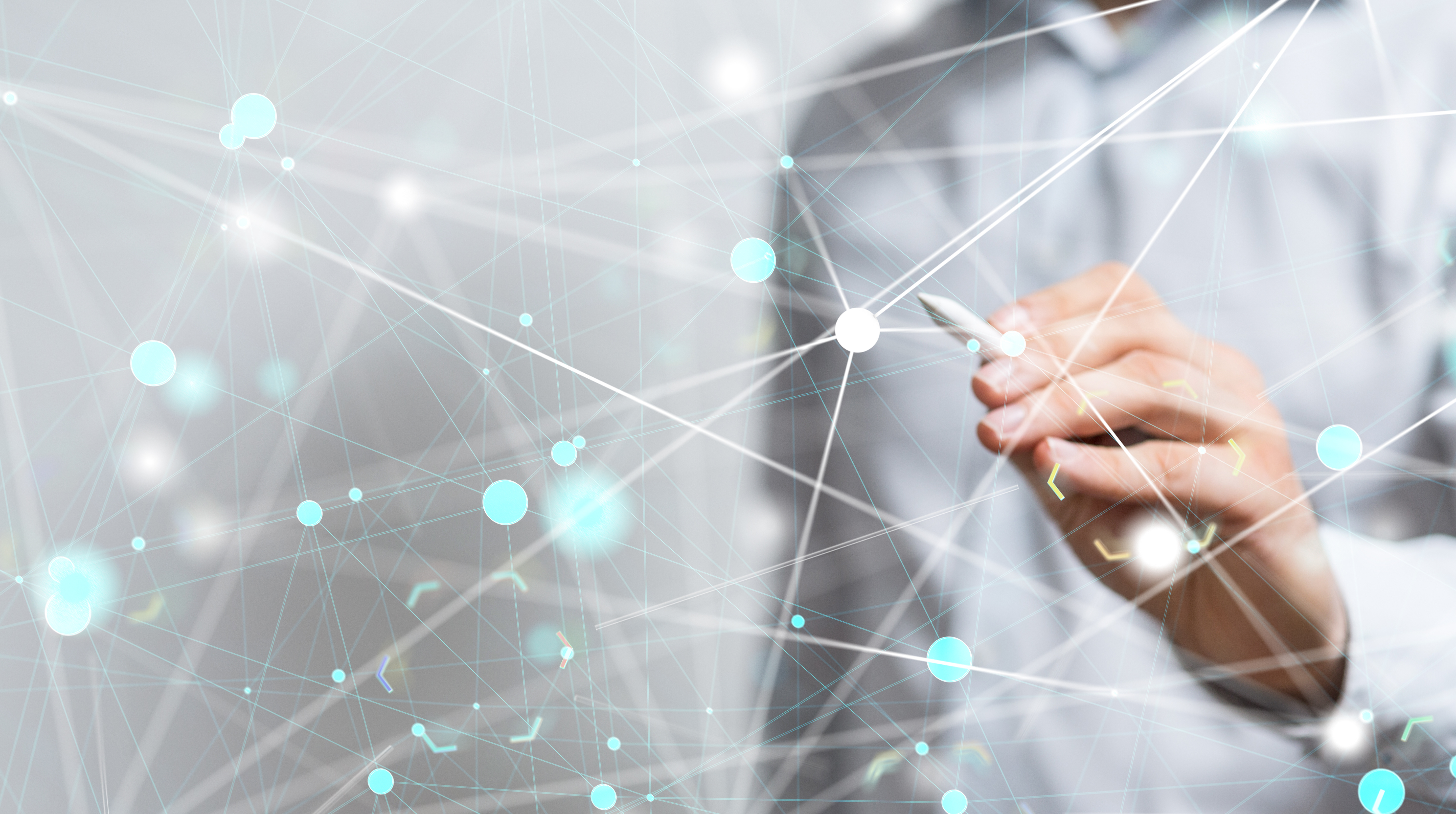 In my previous blog, Protecting VxRail from Power Disturbances, I described the first API-integrated solution that helps customers preserve data integrity on VxRail if there are unplanned power events. Today, I'm excited to introduce another solution that resulted from our close partnership with Schneider Electric (APC).

Why is it important?

Over the last few years, VxRail has become a critical HCI system and data-center building block for over 15,000 customers who have deployed more than 220,000 nodes globally. When HCI was first introduced, it was often considered for specific workloads such as VDI or ROBO locations. However, with the evolution of hardware and software capabilities, VxRail became a catalyst in data-center modernization, deployed across various use cases from core to cloud to edge. Today, customers are deploying VxRail for mission-critical workloads because it is powerful enough to meet the most demanding requirements for performance, capacity, availability, and rich data services.

Dell Technologies is a leader in data-protection solutions and offers a portfolio of products that can fulfill even the most demanding RPO and RTO requirements from customers. In addition to using traditional data-protection solutions, it is best practice to use a UPS to protect the infrastructure and ensure data integrity if there are unplanned power events. In this blog, I want to highlight a new solution from Schneider Electric, the provider of APC Smart-UPS systems.

Schneider Electric is one of Dell Technologies’ strategic partners in the Extended Technologies Complete Program. It provides Dell Technologies with APC UPS and IT rack enclosures offering a comprehensive solution set of infrastructure hardware, monitoring, management software, and service options.

PowerChute Network Shutdown in version 4.5 seamlessly integrates with VxRail by communicating over the network with the APC UPS. If there is a power outage, PowerChute can gracefully shut down VxRail clusters using the VxRail API. As a result of this integration, PowerChute can run on the same protected VxRail cluster, saving space and reducing hardware costs.

Key benefits of this solution include:

How does it work?

This is easiest to describe using the following diagram, which covers the steps taken in a power event and when the event is cleared:

I highly recommend watching the demo of this solution in action, which is listed in the Additional resources section at the end of this blog.

Protection against unplanned power events should be a part of a business continuity strategy for all customers who run their critical workloads on VxRail. This practice ensures data integrity by enabling automated and graceful shutdown of VxRail clusters. Customers now have more choice in providing such protection, with the new version of PowerChute Network Shutdown software for APC UPS systems integrated with VxRail API and validated with VxRail.