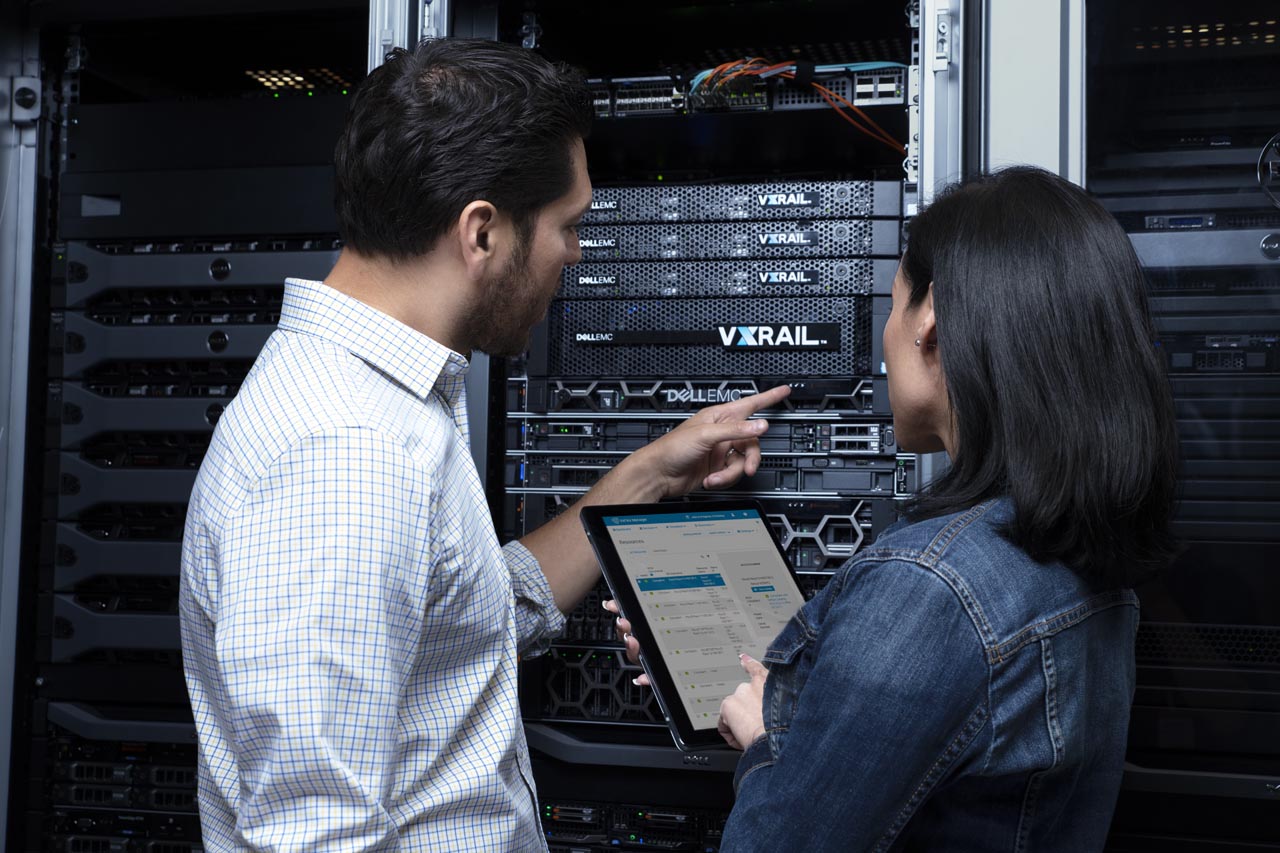 It’s been over a decade since hyper converged infrastructure (HCI) disrupted technology. An ideal architecture for HCI would be a simple, modular architecture, in which all datacenter components (compute, storage, and networking) are consumed in a virtualized way to simplify allocating and managing resources. With this architecture, all physical components reside in the same box. When we combine these boxes, we can scale our datacenter power in all resource domains to accommodate almost any type of workload. This is due to extremely fast processors, large and efficient storage devices, and advanced network connections.

If we abstract the hardware layer in this architecture and imagine a solution that fills all the roles previously described, (virtualization of the three infrastructure domains, compute, network and storage) VMware can easily come to mind. VMware has a strong portfolio of software defined compute (vSphere), storage (vSAN), and networking (NSX family) to create a best of breed hyper-converged infrastructure product.

It will come as no surprise that VMware leads the HCI market due to its vSAN based systems, as reported by IDC1:

In this VMware led market, Dell PowerEdge servers stand out as a logical choice in terms of providing the modular box (server), for this hyperconvergence paradigm. Dell Technologies, as a global server market leader (Worldwide Server Market, IDC), has a long tradition of Ready Systems that allow a simpler  customer deployment experience.

In this prosperous landscape, Dell Technologies holds an outstanding leading place, with a wide portfolio of HCI offerings, led by Dell EMC VxRail in tandem with vSAN Ready Nodes. More than 20 years of collaboration endorses the relationship between Dell Technologies and VMware, specifically in the server space, where we have worked to simplify our joint customers’ technology experience.4 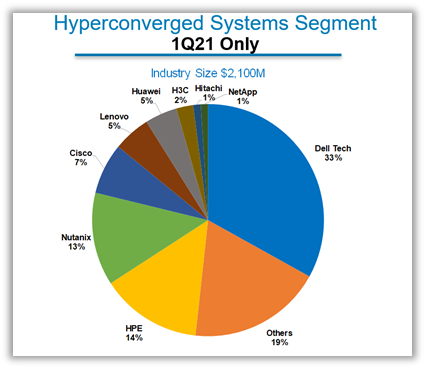 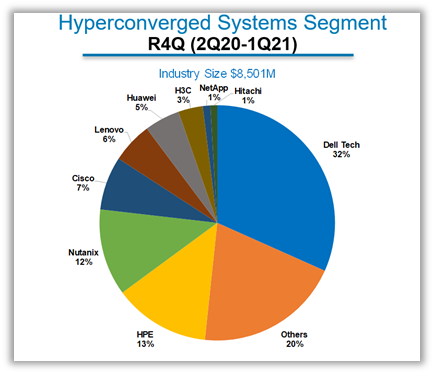 Dell EMC Ready Nodes simplify and accelerate infrastructure modernization providing IT a strategic advantage with their flexibility, simplified operations, and breadth of choice.

This leadership is founded on four pillars:

Watch for my next blog where I’ll provide more info about the rich variety of vSAN Ready Nodes form factors available from Dell Technologies and how that represents a significant business advantage. For the latest technical content on vSAN Ready Nodes, check out our Info Hub site! 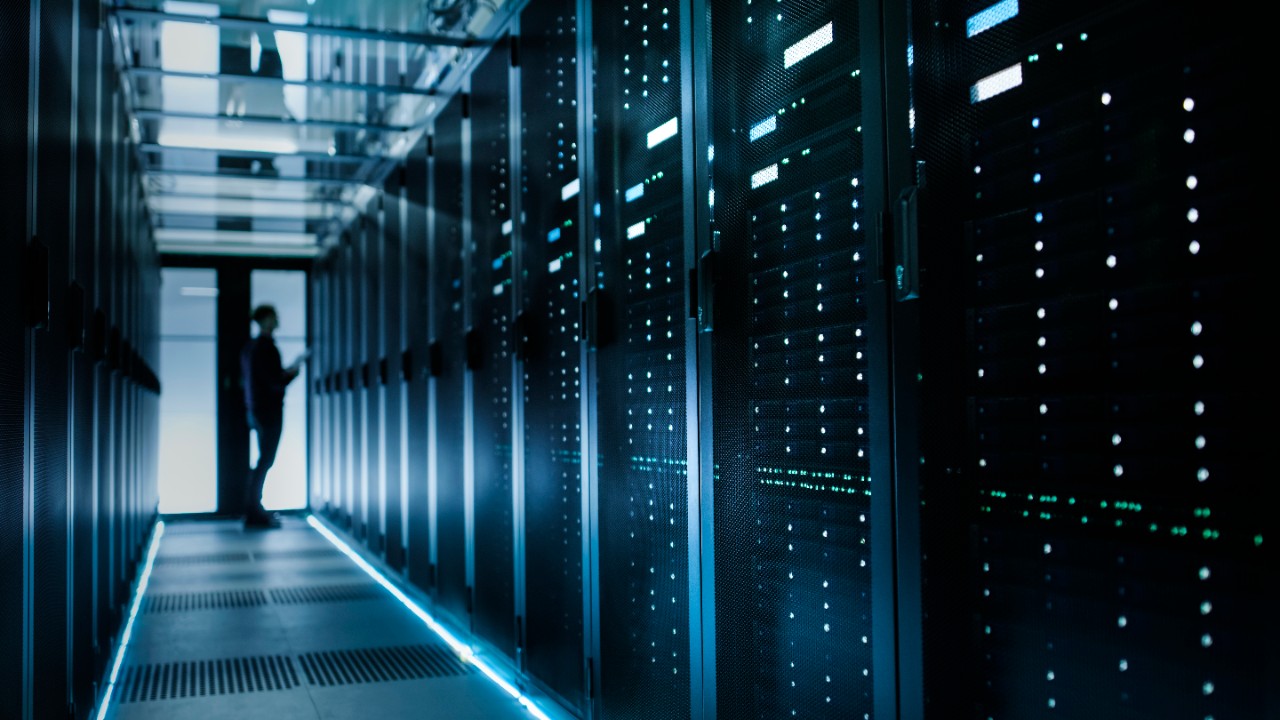 When we think about vSAN Ready Nodes from a Dell Technologies perspective, we provide a wide portfolio of platforms to choose from, both in terms of form factors and technical specifications. We can also offer ease of operations and life cycle management, which are made possible by the graceful integration of Dell EMC Open Manage Integration for VMware vCenter (OMIVV) with VMware’s vSphere lifecycle management (vLCM).

But…is there anything else?

The answer is yes! Behind the scenes is a simple technology that enables the Dell EMC vSAN Ready Nodes platform to reach advanced levels of automation.

Our first contact with this interesting subject comes when we first connect to the underlying PowerEdge iDRAC interface. As shown in the following image, the iDRAC has spotted something. 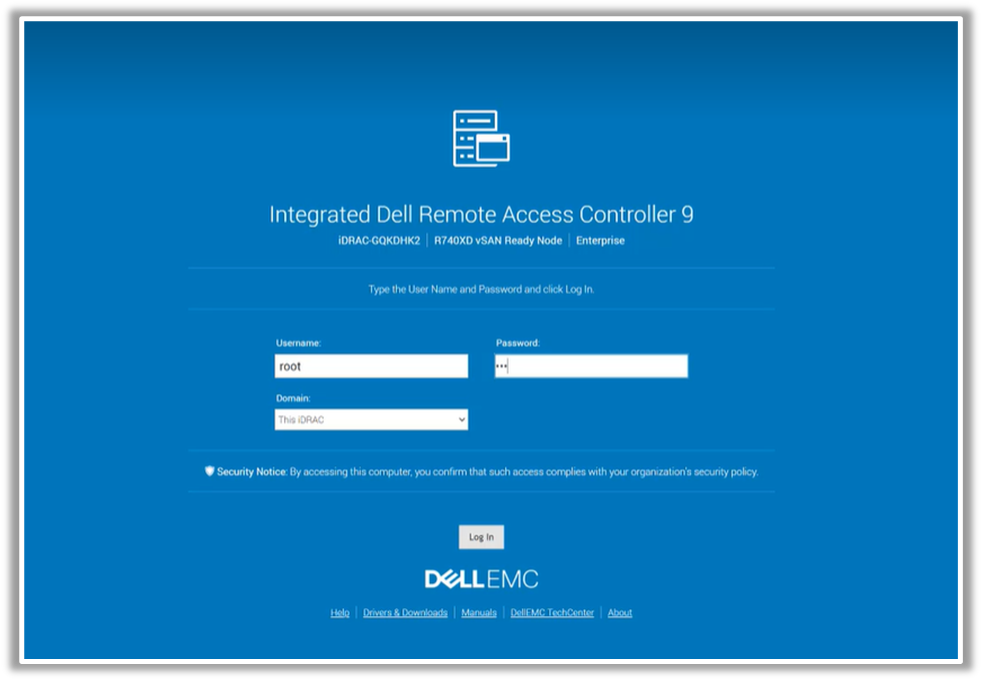 As you may know, vCenter is the main management console for a VMware platform such as vSAN Ready Nodes. From vCenter, we can see a very similar description of our Ready Node:

No mention of Ready Node here, just a vanilla description of the server model. So, what’s the deal about that unique chassis identification provided by the Identity Module?

That particular text string enables any programmatic interface to locate and direct an operation to that specific set of infrastructure assets. A select type primitive from an automation platform may be able to pinpoint a Dell EMC vSAN Ready Node from other servers because it has an Identity Module. This means that if we have a 100-node server farm, in which 16 are, for example, Dell EMC R740XD vSAN Ready Nodes, and the rest are other server types without an Identity Module, we can easily direct any operation coming from an automation framework such as vRealize Orchestrator, Ansible, or Puppet to our Ready Nodes, and it will respond positively to any query that is looking for a vSAN Ready Node text string.

The Identity Module, as a unique chassis identification method, allows any programmatic operation to distinguish the ready node farm from the rest of the servers in the datacenter—a simple feature that enables such powerful automation. On top of this, from a support perspective, the Identity Module enables Dell teams to more rapidly triage and diagnose any system anomaly. This feature helps the more than 1.800 VMware certified Dell support engineers solve above 90% of the cases in-house, avoiding the need to route level 3 tickets to VMware.

To read more about Identity Modules driven automation, check out this blog (Tony’ blog on IDMod automation, when available). 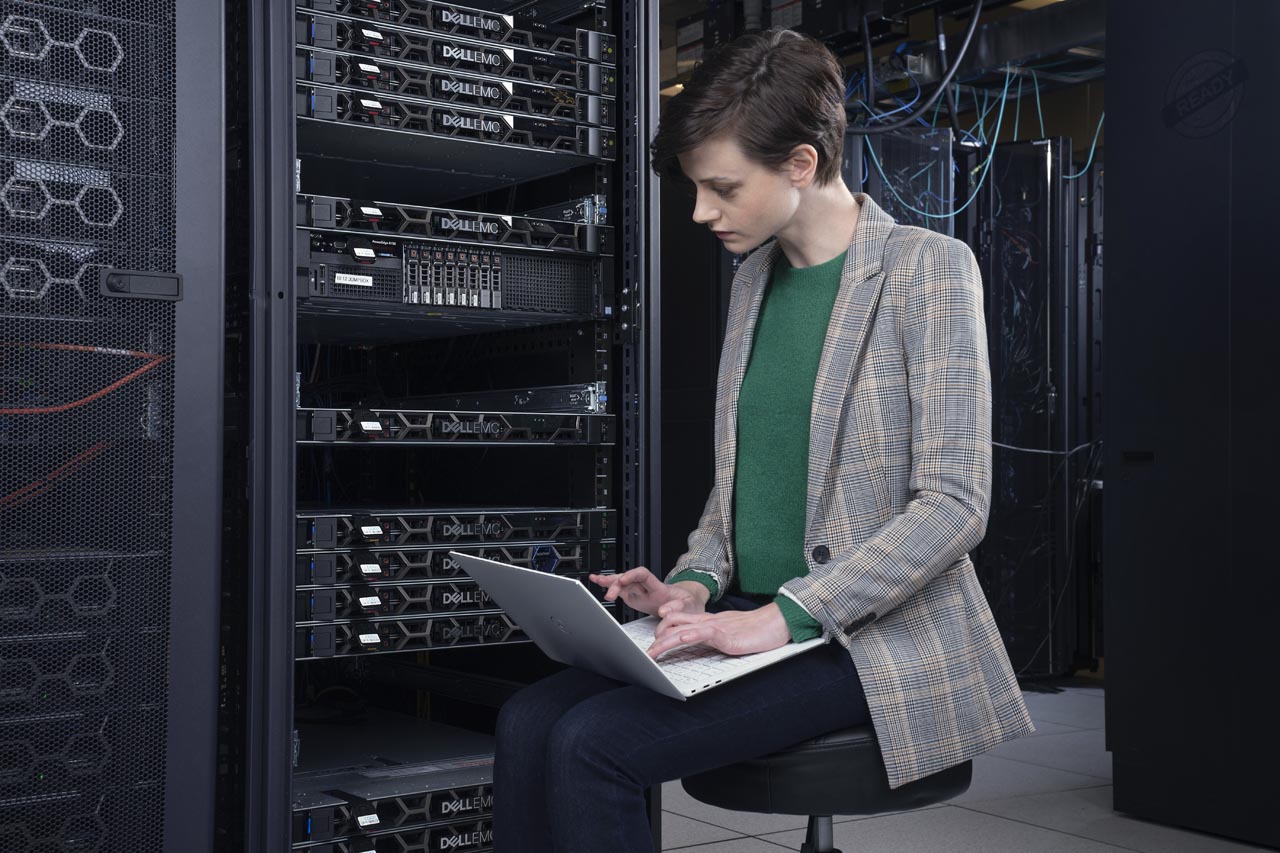 Dell EMC vSAN Ready Nodes have Identity Modules that act at the lowest level of a node and imbues a host with special features and characteristics. In this blog, we explore how to use the attributes of the Identity Module to automate tasks in a vSphere environment.

Let’s start out by identifying all the Dell EMC vSAN Ready Nodes in our environment and displaying some information about them, such as the BIOS version of each host and vSphere version. After we learn about the hosts in our environment, we will discover what VMs are running on those hosts. We’ll do all of this through VMware’s PowerCLI, which is a plug-in for Microsoft PowerShell.

Note: We could also easily do this using other tools for vSphere such as Python (with pyVmomi), Ansible, and many others.

The environment we are using is a small environment using three Dell EMC vSAN Ready Nodes R740 with identity modules. All three nodes are running  ESXi 7.0 U2 (vSAN 7.0 Update 2). VMware vSAN is using an all flash configuration. The code we are discussing in this post should work across current Dell EMC vSAN Ready Nodes and current vSphere releases.

We’re not going to cover many of the things necessary to build and run these scripts, like connecting to a vSphere environment. There are many great blogs that cover these details, and we want to focus on the code for Dell EMC vSAN Ready Nodes.

In this first code block, we start by finding all the Dell EMC vSAN Ready Nodes in our environment. We use a ForEach-Object loop to do this.

This code snippet assumes we have connected to a vSphere environment with the Connect-VIServer command. It then creates a view of all the hosts in the environment using the Get-VMhost command, the results of which are passed to the ForEach-Object loop using the | (pipe) symbol. We then loop through this view of hosts using a ForEach-Object command and look at the hardware.systemInfo.model property of each host. The object of focus, one of the discovered hosts, is represented by the $_ variable, and to access the properties of the host object, we use the ExtensionData property. We check each host with a conditional method, .contains(), added on to the end of the property we want to check. Using the .contains method, we check if the hardware.systemInfo.model contains “vSAN Ready Node”. This string is a property that is unique to Dell EMC vSAN Ready Nodes and the Identity Module. It’s set at the factory when the Identity Module is installed.

If the system is a Dell EMC vSAN Ready Node with an Identity Module, we then display information from the hardware.systemInfo and the hardware.biosInfo, specifically the system’s BIOS version. We also collect the vSphere build of the host using the config.product property of the host.

As we loop through each host, we only display these details for the Dell EMC vSAN Ready Nodes in the environment that have Identity Modules. This results in output similar to the following:

The remainder of the nodes are excluded from the output shown here:

This provides relevant information that we can use to create automated reports about our environment. You can also use the script as the basis for larger automation projects. For example, when a new Dell EMC vSAN Ready node is added to an environment, a script could detect that addition, perform a set of tasks for new Dell EMC vSAN Ready Nodes, and notify the IT team when they are complete. These sample scripts can be used as a spark for your own ideas.

This next script uses the same for loop from before to find the hosts that are Dell EMC vSAN Ready Nodes and now looks to see what VMs are running on the host. From this example, we can see how the Identity Module is integral in automating the virtual environment from the hosts to the virtual machines.

This new code snippet, shown in bold, builds on the previous example by looping through our hosts looking for the “vSAN Ready Node” as before. When it finds a matching host, it creates a new view using the Get-VM command, consisting of the virtual machines for that host. The host is specified using the -Location parameter, to which is passed the current host represented by the $_. We then use another ForEach-Object loop to display a list of VMs on the host.

This gives our code context. If an action is carried out, we can now define the scope of that action, not just on the host but on the workloads it’s running. We can start to build code with intelligence — extracting a greater value from the system, which in turn provides the opportunity to drive greater value for the organization.

As I said earlier, this is just the starting point of what is possible when building PowerCLI scripts for Dell EMC vSAN Ready Nodes with Identity Modules! Other automation platforms, like Ansible, can also take advantage of the identity module features. We only covered the basics, but there are enormous possibilities beyond discovery operations. The nuggets of knowledge in this blog unlock numerous opportunities for you to build automations that empower your data center.