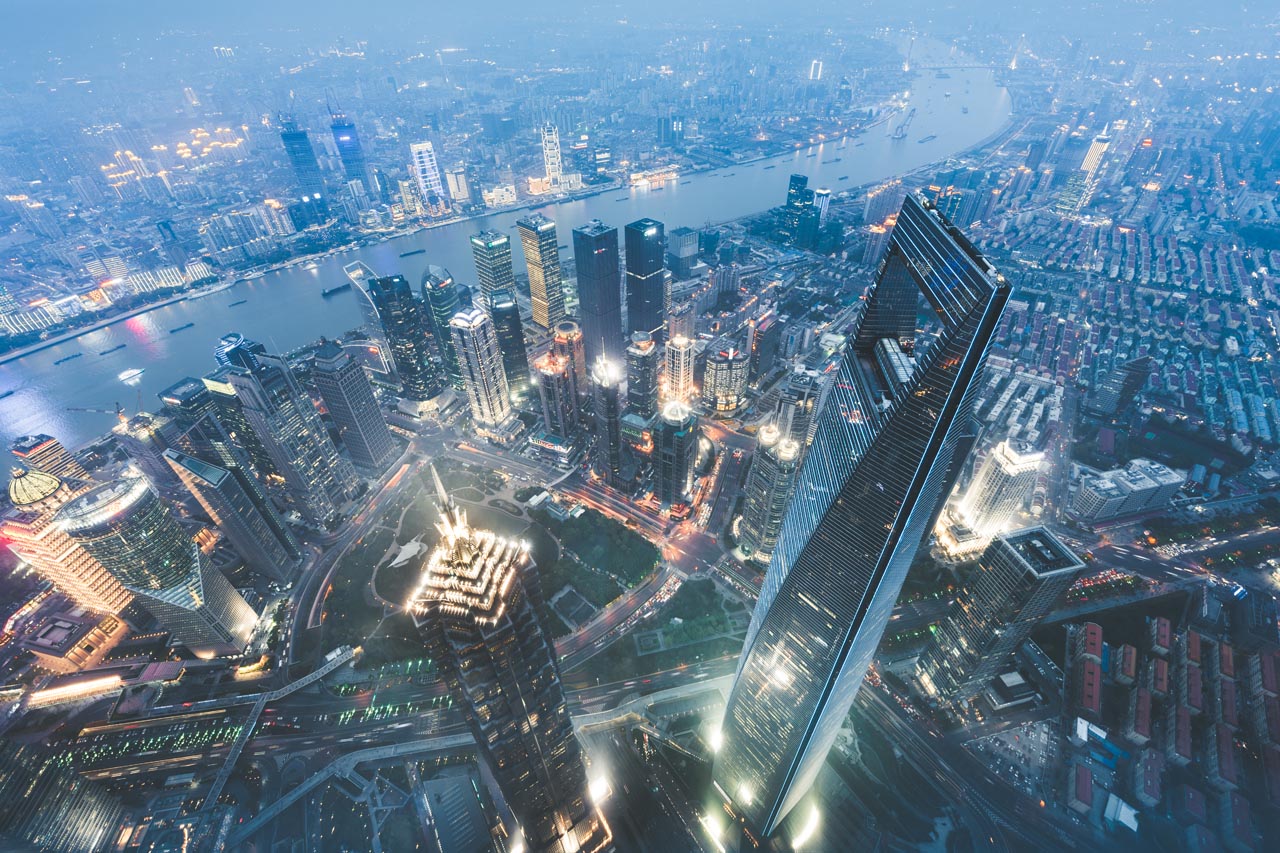 Deployment of compute at the Edge enables the real-time insights that inform competitive decision making. Application data is increasingly coming from outside the core data center (“the Edge”) and harnessing all that information requires compute capabilities outside the core data center. It is estimated that 75% of enterprise-generated data will be created and processed outside of a traditional data center or cloud by 2025.[1]

This blog demonstrates that the Dell EMC PowerEdge XE2420, a high-performance Edge server, performs AI inference operations more efficiently by leveraging its ability to use up to four NVIDIA T4 GPUs in an edge-friendly short-depth server. The XE2420 with NVIDIA T4 GPUs can classify images at 25,141 images/second, an equal performance to other conventional 2U rack servers that is persistent across the range of benchmarks.

The Dell EMC PowerEdge XE2420 is a 16” (400mm) deep, high-performance server that is purpose-built for the Edge. The XE2420 has features that provide dense compute, simplified management and robust security for harsh edge environments. 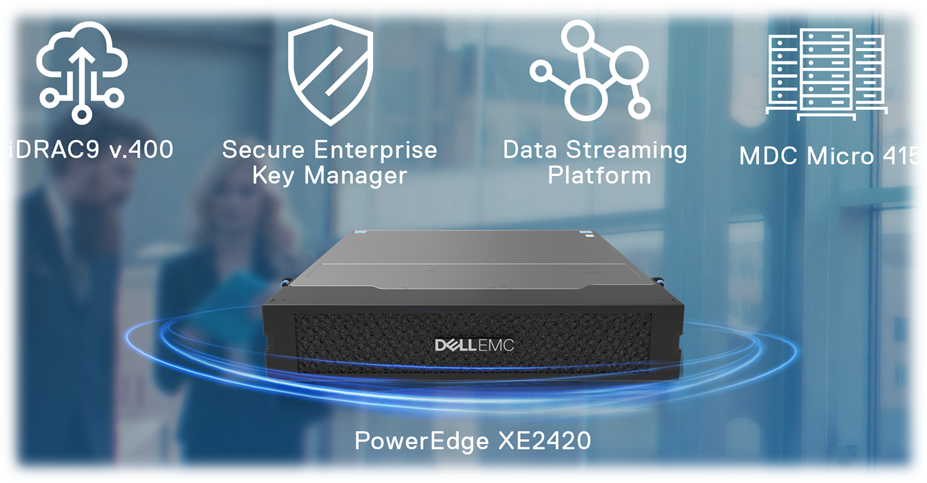 Built for performance: Powerful 2U, two-socket performance with the flexibility to add up to four accelerators per server and a maximum local storage of 132TB.

The XE2420 allows for flexibility in the type of GPUs you use, in order to accelerate a wide variety of workloads including high-performance computing, deep learning training and inference, machine learning, data analytics, and graphics. It can support up to 2x NVIDIA V100/S PCIe, 2x NVIDIA RTX6000, or up to 4x NVIDIA T4.

Edge Inferencing with the T4 GPU 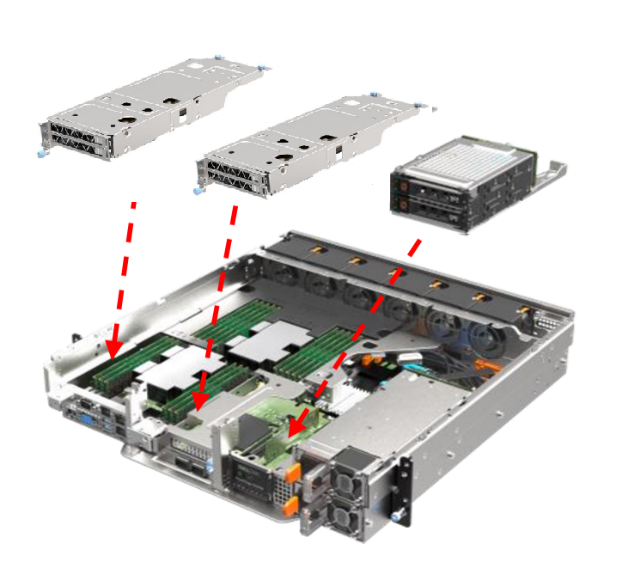 Inference Use Cases at the Edge

As computing further extends to the Edge, higher performance and lower latency become vastly more important in order to decrease response time and reduce bandwidth. One suite of diverse and useful inference workload benchmarks is MLPerf. MLPerf Inference demonstrates performance of a system under a variety of deployment scenarios and aims to provide a test suite to enable balanced comparisons between competing systems along with reliable, reproducible results.

The MLPerf Inference v0.7 suite covers a variety of workloads, including image classification, object detection, natural language processing, speech-to-text, recommendation, and medical image segmentation. Specific scenarios covered include “offline”, which represents batch processing applications such as mass image classification on existing photos, and “server”, which represents an application where query arrival is random, and latency is important. An example of server is essentially any consumer-facing website where a consumer is waiting for an answer to a question. Many of these workloads are directly relevant to Telco & Retail customers, as well as other Edge use cases where AI is becoming more prevalent.

We demonstrate inference performance for the XE2420 + 4x NVIDIA T4 accelerators across the 6 benchmarks of MLPerf Inference v0.7 in order to showcase the versatility of the system. The inference benchmarking was performed on:

These results and the corresponding code are available at the MLPerf website.[1]

The XE2420 is a compact server that supports 4x 70W T4 GPUs in an efficient manner, reducing overall power consumption without sacrificing performance. This high-density and efficient power-draw lends it increased performance-per-dollar, especially when it comes to a per-GPU performance basis.

Additionally, the PowerEdge XE2420 is part of the NVIDIA NGC-Ready and NGC-Ready for Edge validation programs[i]. At Dell, we understand that performance is critical, but customers are not willing to compromise quality and reliability to achieve maximum performance. Customers can confidently deploy inference and other software applications from the NVIDIA NGC catalog knowing that the PowerEdge XE2420 meets the requirements set by NVIDIA to deploy customer workloads on-premises or at the Edge. 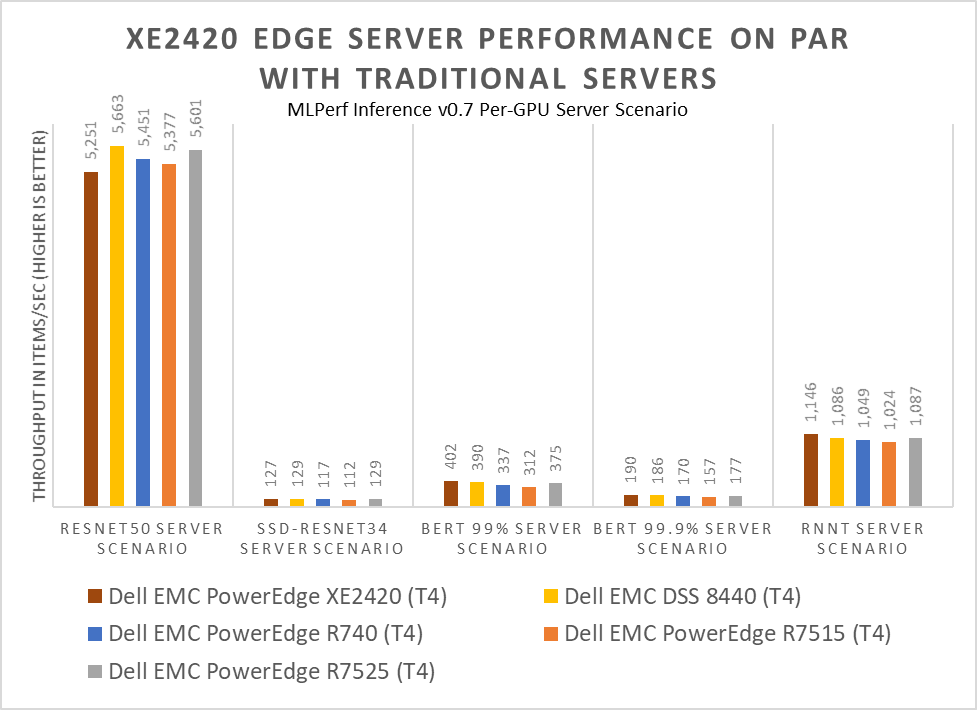 In the chart above, per-GPU (aka 1x T4) performance numbers are derived from the total performance of the systems on MLPerf Inference v0.7 & total number of accelerators in a system. The XE2420 + T4 shows equivalent per-card performance to other Dell EMC + T4 offerings across the range of MLPerf tests. 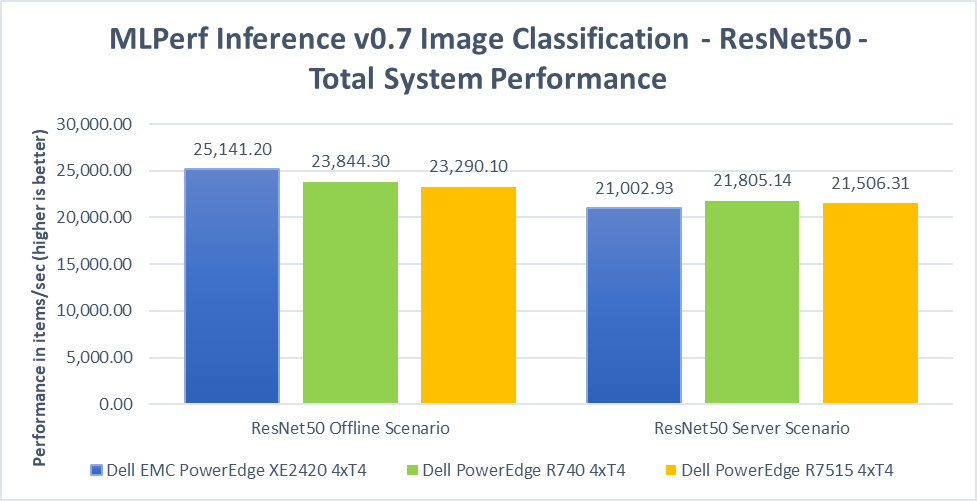 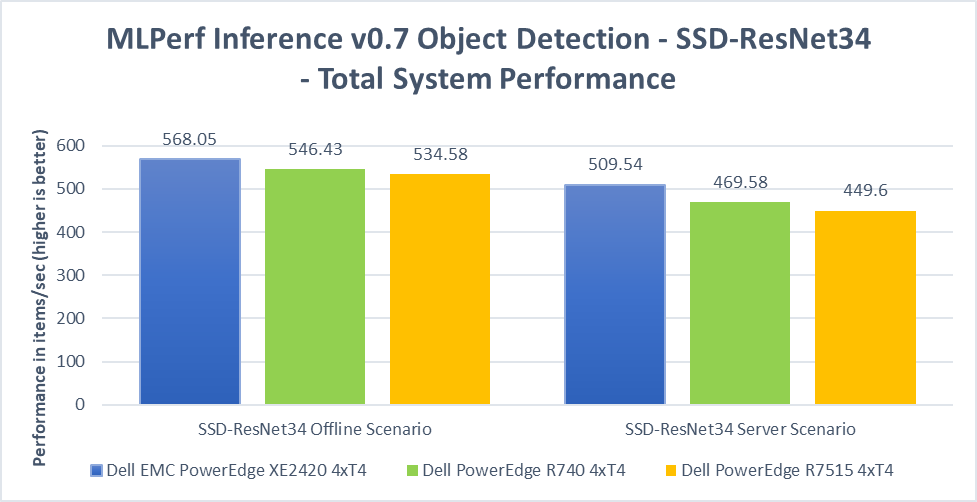 When placed side by side with the Dell EMC PowerEdge R740 (4x T4) and R7515 (4x T4), the XE2420 (4x T4) showed performance on par across all MLPerf submissions. This demonstrates that operating capabilities and performance were not sacrificed to achieve the smaller depth and form-factor.

Conclusion: Better Density and Flexibility at the Edge without sacrificing Performance

MLPerf inference benchmark results clearly demonstrate that the XE2420 is truly a high-performance, half-depth server ideal for edge computing use cases and applications. The capability to pack four NVIDIA T4 GPUs enables it to perform AI inference operations at par with traditional mainstream 2U rack servers that are deployed in core data centers. The compact design provides customers new, powerful capabilities at the edge to do more, faster without extra components. The XE2420 is capable of true versatility at the edge, demonstrating performance not only for common retail workloads but also for the full range of tested workloads. Dell EMC offers a complete portfolio of trusted technology solutions to aggregate, analyze and curate data from the edge to the core to the cloud and XE2420 is a key component of this portfolio to meet your compute needs at the Edge.

The raw results from the MLPerf Inference v0.7 published benchmarks are displayed below, where the metric is throughput (items per second). 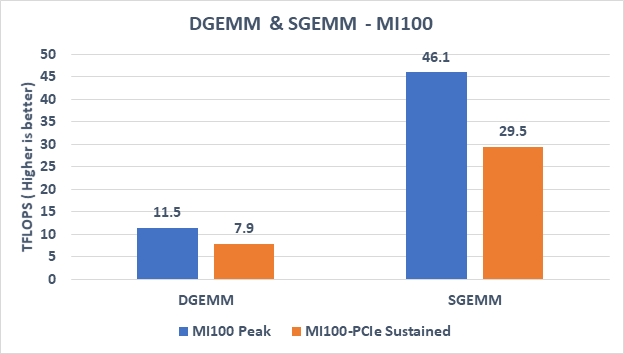 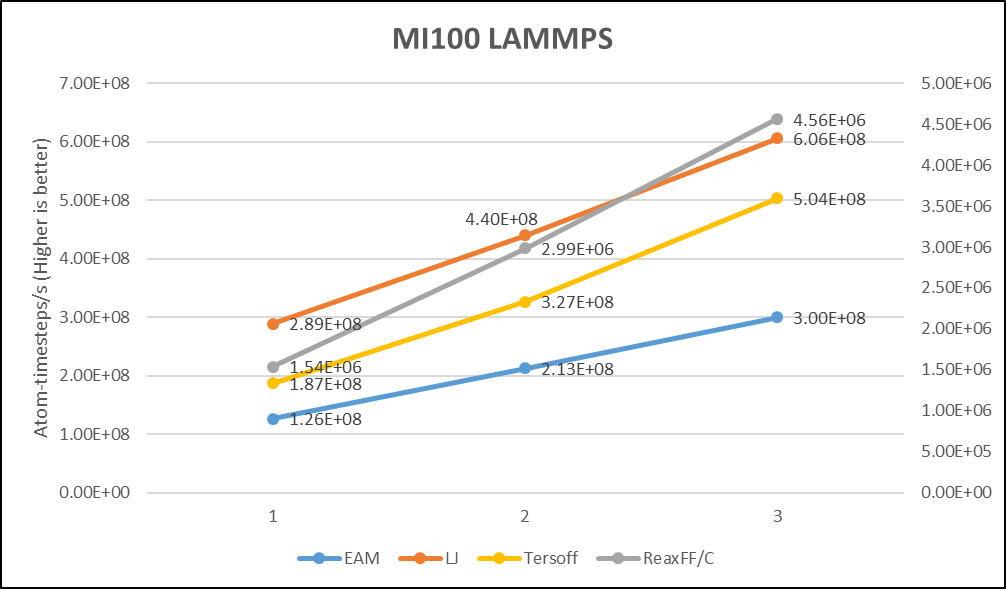 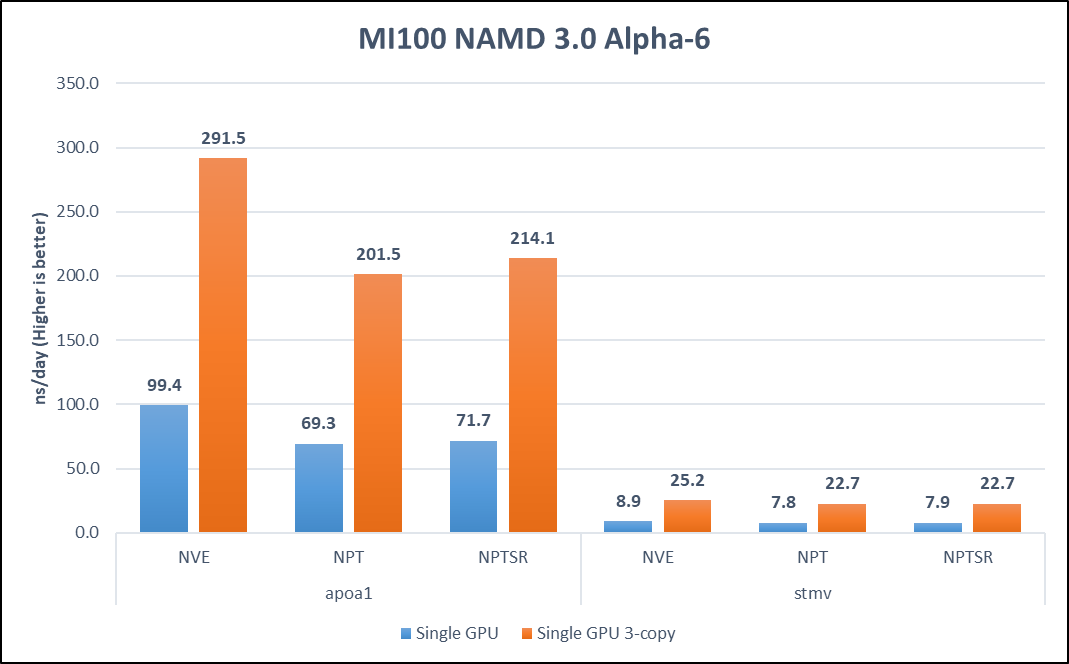 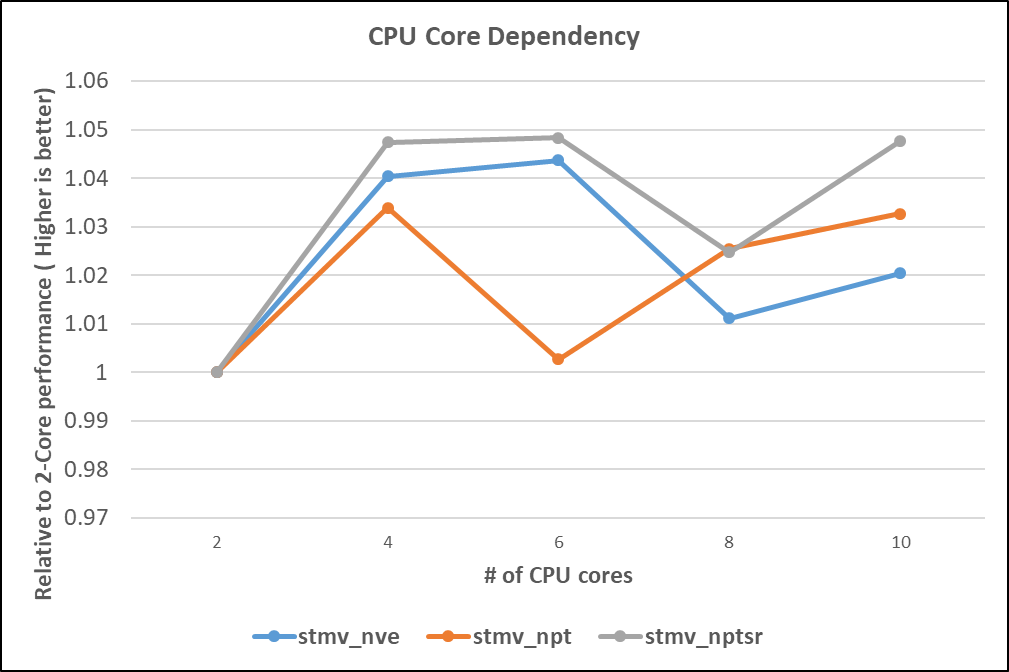 MLPerf (https://mlperf.org) Inference is a benchmark suite for measuring how fast Machine Learning (ML) and Deep Learning (DL) systems can process input inference data and produce results using a trained model. The benchmarks belong to a diversified set of ML use cases that are popular in the industry and provide a standard for hardware platforms to perform ML-specific tasks. Hence, good performance under these benchmarks signifies a hardware setup that is well optimized for real world ML inferencing use cases.

The NVIDIA Tesla T4, based on NVIDIA’s Turing architecture is one of the most widely used AI inference accelerators. The Tesla T4 features NVIDIA Turing Tensor cores which enables it to accelerate all types of neural networks for images, speech, translation, and recommender systems, to name a few. Tesla T4 supports a wide variety of precisions and accelerates all major DL & ML frameworks, including TensorFlow, PyTorch, MXNet, Chainer, and Caffe2.

The MLPerf inference benchmark measures how fast a system can perform ML inference using a trained model with new data that is provided in various deployment scenarios. Table 3 shows seven mature models that are in the official v0.7 release.

The above models serve in various critical inference applications or use cases that are known as “scenarios.” Each scenario requires different metrics and demonstrates performance in a production environment. MLPerf Inference consists of four evaluation scenarios that are shown in Table 4:

The units on which Inference is measured are based on samples and queries. A sample is a unit on which inference is run, such as an image or sentence. A query is a set of samples that are issued to an inference system together. For detailed explanation of definitions, rules and constraints of MLPerf Inference see: https://github.com/mlperf/inference_policies/blob/master/inference_rules.adoc#constraints-for-the-closed-division

Table 5 above shows the raw performance of the R740_T4x4 SUT in samples/s for the offline scenario and queries for the server scenario. Detailed results for this and other configurations can be found at https://mlperf.org/inference-results-0-7/

Figures 1 to 4 below show the inference capabilities of two Dell PowerEdge servers; R7515 and PowerEdge R7525. They are both 2U and are powered by AMD processors. The R7515 is single socket, and the R7525 is dual socket. The R7515 used 4xNVIDIA Tesla T4 GPUs while the R7525 used four different configurations of three NVIDIA GPU accelerators; Tesla T4, Quadro RTX8000, and A100. Each bar graph indicates the relative performance of inference operations that are completed in a set amount of time while bounded by latency constraints. The higher the bar graph, the higher the inference capability of the platform. 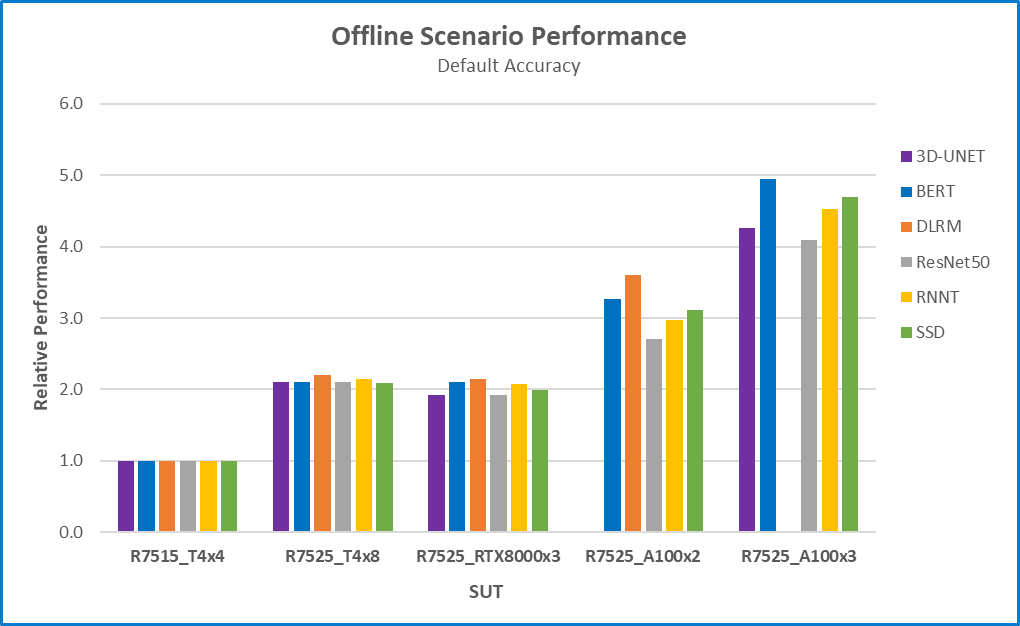 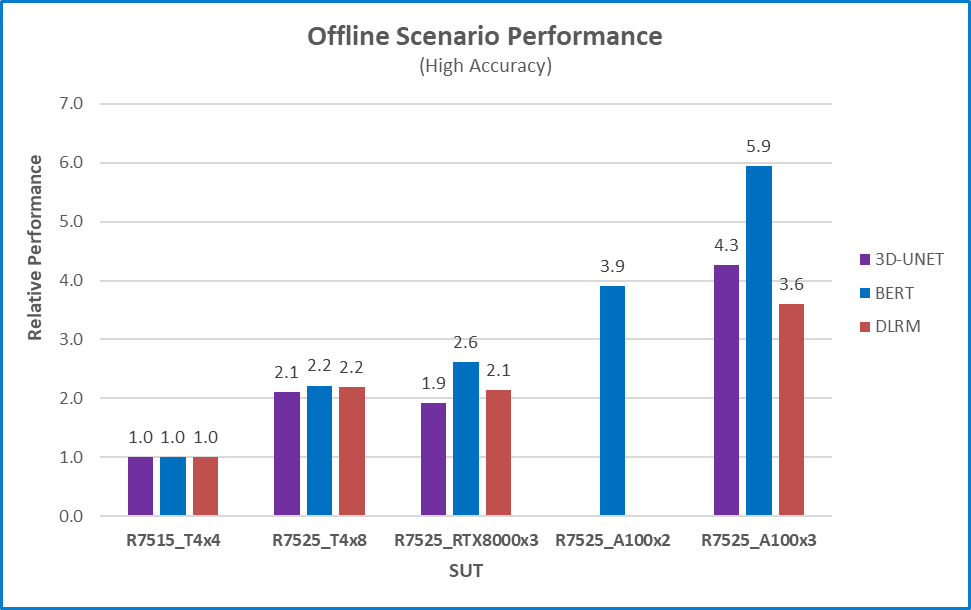 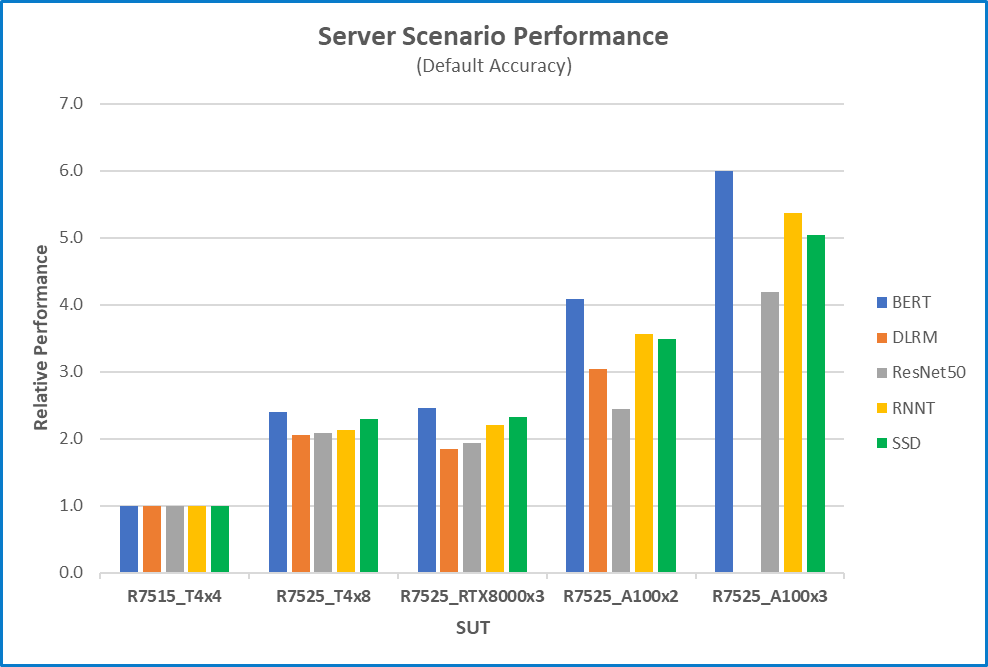 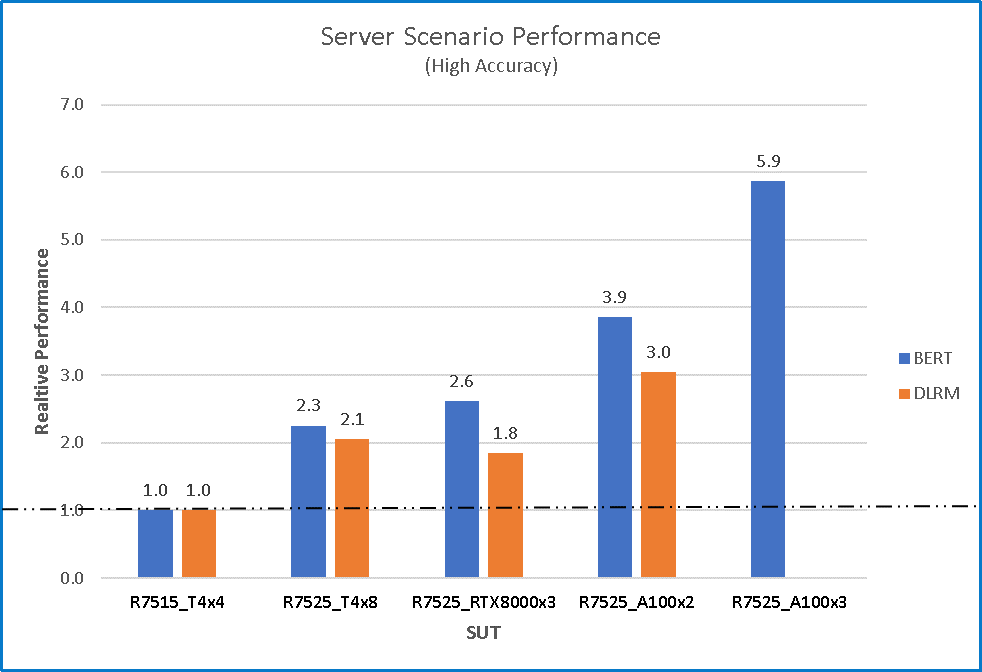 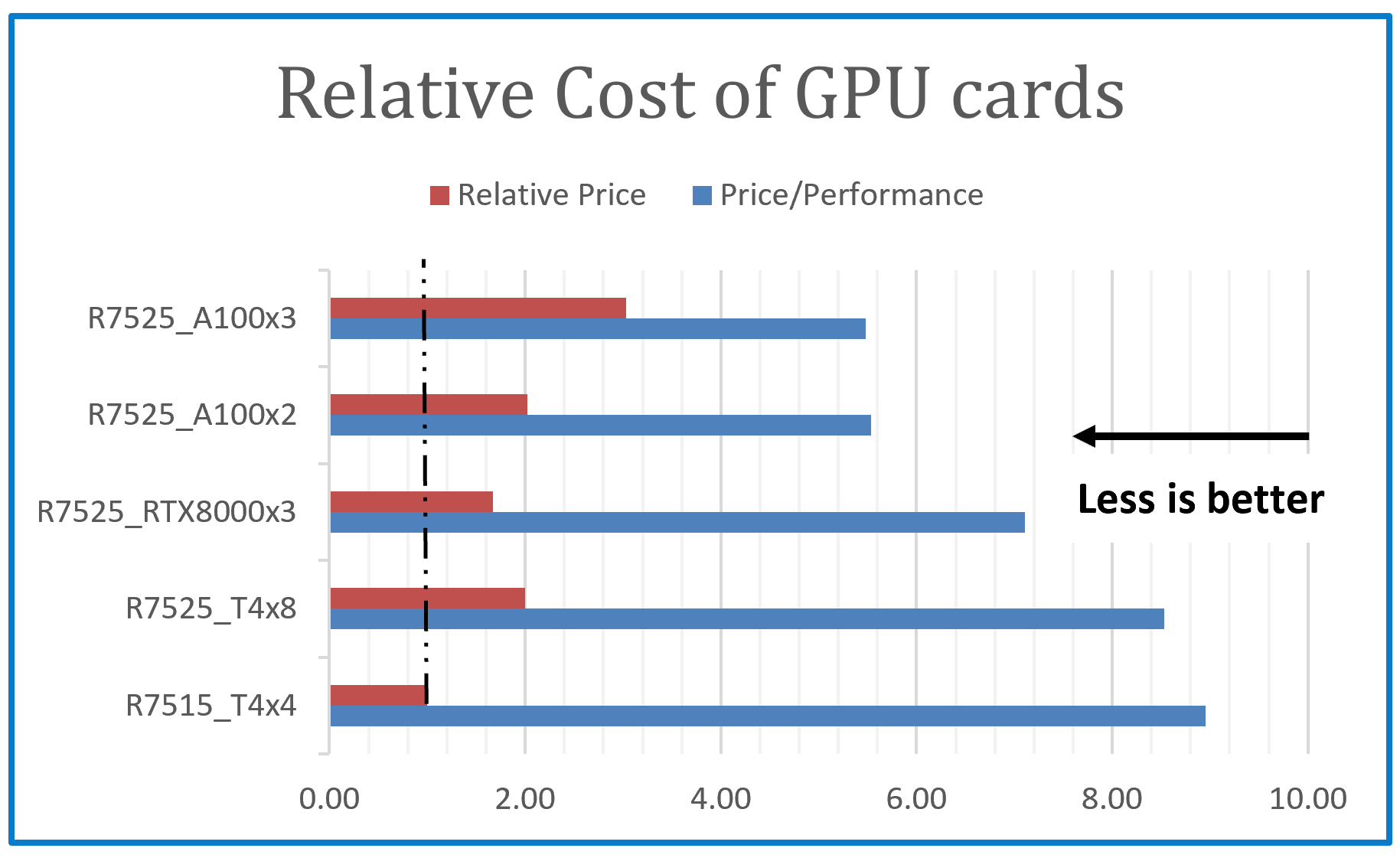 Key Takeaways from the results