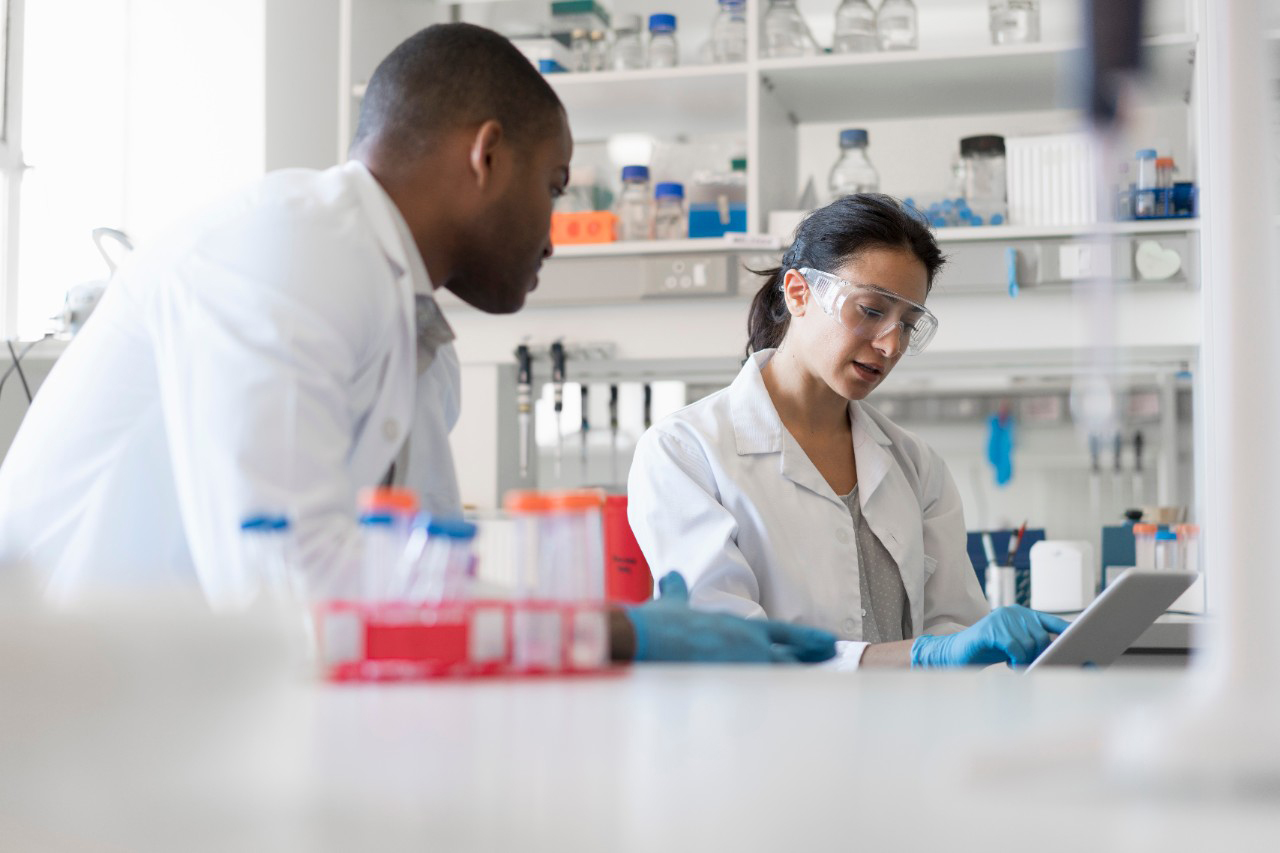 Intel® Xeon® Scalable Processors have been proven for consistent and stable performance for many workload types. New 3rd Generation Intel® Xeon® Scalable Processors, also known by the code name of Ice Lake perform exceptionally well for a BWA-GATK pipeline. In this study, we tested two Ice Lake processors, 8352Y and 8358, and the test server configuration is also summarized in Table 1.

The test data was chosen from one of Illumina’s Platinum Genomes. ERR194161 was processed with Illumina HiSeq 2000 submitted by Illumina and can be obtained from EMBL-EBI. The DNA identifier for this individual is NA12878. The description of the data from the linked website shows that this sample has a >30x depth of coverage, and it reaches ~53x.

Table 2 summarizes the overall runtimes and the comparisons between each step for our 9-step BWA-GATK pipeline with a single sample.

The mapping and sorting step shows a descent ~36 % runtime reduction due to the nature of the good scalability of BWA. The base recalibration step also takes advantage of a higher core count from Ice Lake CPUs.

Note: The number of cores used for the test is parenthesized.

A typical way of running an NGS pipeline is to process multiple samples on a compute node and use multiple compute nodes to maximize the throughput. However, this time the tests were performed on a single compute node due to the limited number of servers available at this moment.

The current pipeline invokes many pipe operations in the first step to minimize the amount of writing intermediate files. Although this saves a day of runtime and lowers the storage usage significantly, the cost of invoking pipes is quite heavy. Hence, this limits the number of concurrent sample processings. Typically, a process silently fails when there is not enough resource left to start an additional process.

The field of NGS data analysis has been moving fast in terms of data growth and data variations. The majority of the open-source applications in NGS data analysis are unable to take advantage of accelerator technology and do not scale well over the number of cores. It is time that users need to think about how this problem can be tackled. One simple way to avoid this problem is to perform data-level parallelization. Although the decision of making when to split data is pretty hard, it is tractable with careful interventions in an existing BWA-GATK pipeline without diluting statistical power with a sheer number of data. If each smaller data chunk goes through an individual pipeline on each core and is merged at the end, it could be possible to achieve better performance on a single sample. This performance gain could lead to higher throughput if the overall runtime reduces significantly. 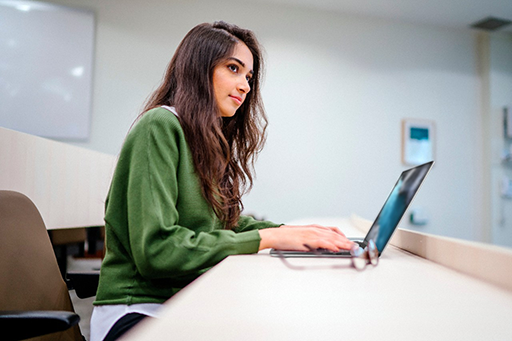 Over the past decade, GPUs have become popular in scientific computing because of their great ability to exploit a high degree of parallelism. NVIDIA has optimized  life sciences applications to run on their general-purpose GPUs. Unfortunately, these GPUs can only be programmed with CUDA, OpenACC, or the OpenCL framework. Most of the life sciences community is not familiar with these frameworks so few biologists or bioinformaticians can make efficient use of GPU architectures. However, GPUs have been making inroads into the molecular dynamics simulation (MDS) field since MD was developed in the 1950s. MDS requires heavy computational work to simulate biomolecular structures or their interactions.

In this blog, the performance of one popular MDS application, NAMD, is presented with various NVIDIA A-series GPUs such as the A100, the A10, the A30 and the A40 . NAMD is a free and open-source parallel MD package designed for analyzing the physical movements of atoms and molecules.

Dell Technologies has released the new PowerEdge R750xa server, a GPU workload platform that is designed to support artificial intelligence, machine learning, and high-performance computing solutions. The dual socket/2U platform supports 3rd Gen Intel Xeon Scalable Processors (code named Ice Lake). It supports up to 40 cores per processor, has eight memory channels per CPU, and up to 32 DDR4 DIMMs at 3200 MT/s DIMM speed. This server can accommodate up to four double-width PCIe GPUs that are located in the front left and the front right of the server. The test server configurations are summarized in Table 1, and the specifications of tested NVIDIA GPUs are listed in Table 2.

Figure 1 shows the performance of four GPUs with the STMV dataset.  The figures represent the performance changes in nanoseconds per day (ns/day) with various numbers of cores used with one, two or four GPUs. The only valid comparison between the various GPUs is NVIDIA A100 and A10 since the test systems were configured identically. Although the performance of NAMD is affected by the CPU clock speed, the tested systems are not significantly different  from the CPU’s clock speed. The A10 is rated at three times the single precision FLOPS  of the A30, and  the A10 performs better than the A30 on the two GPU tests even with slightly slower CPUs. The A100 outperformed by roughly 25 percent and 16 percent  on single and two GPU tests when comparing the A10’s results, respectively.

The results from four GPU tests in Figure 1 show similar performance for the different GPUs. This agrees well with our previous test results that NAMD does not scale after two GPUs. We can rule out a potential argument that the data size might be too small since 3 million atom data, HECBioSim3000k-atom system, which is a pair of 1IVO and 1NQL hEGFR tetramers, shows similar or worse results (those  results are not shown here). 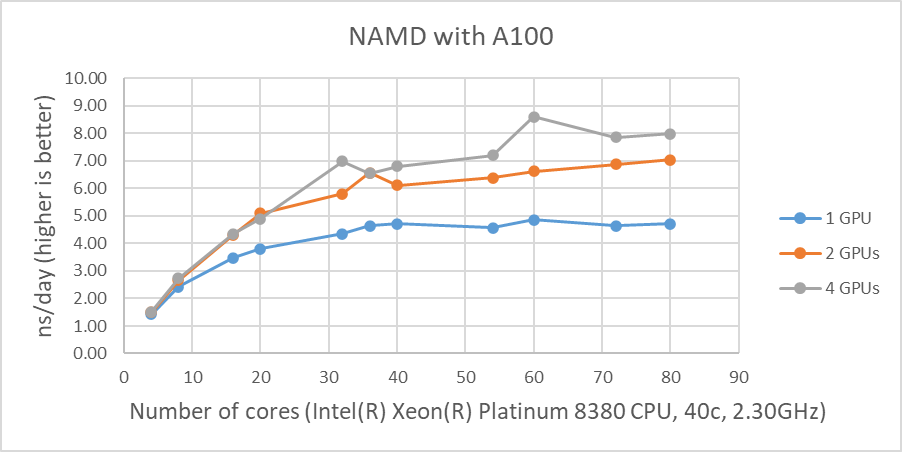 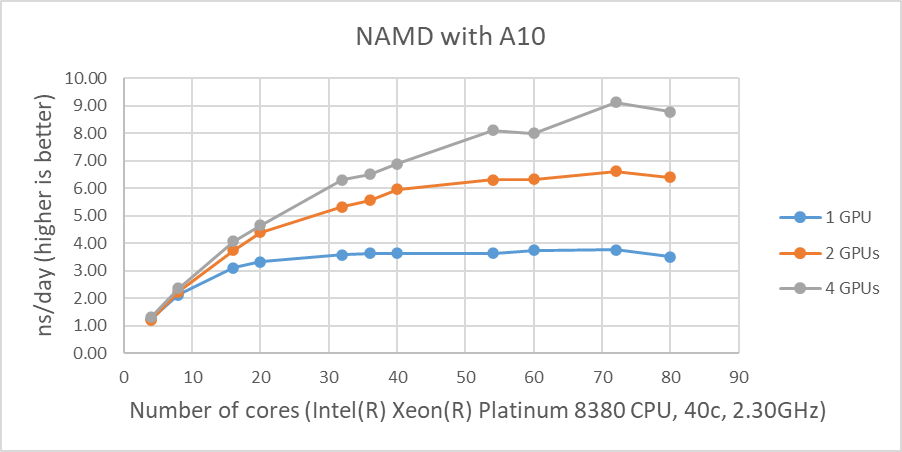 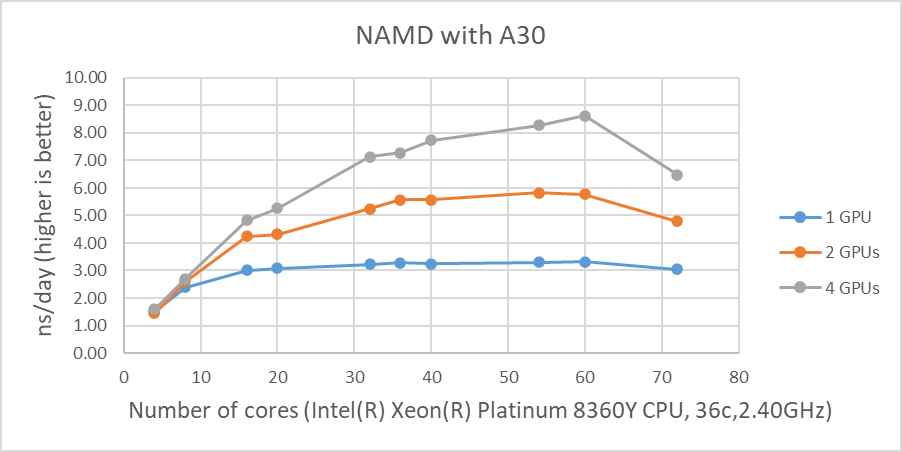 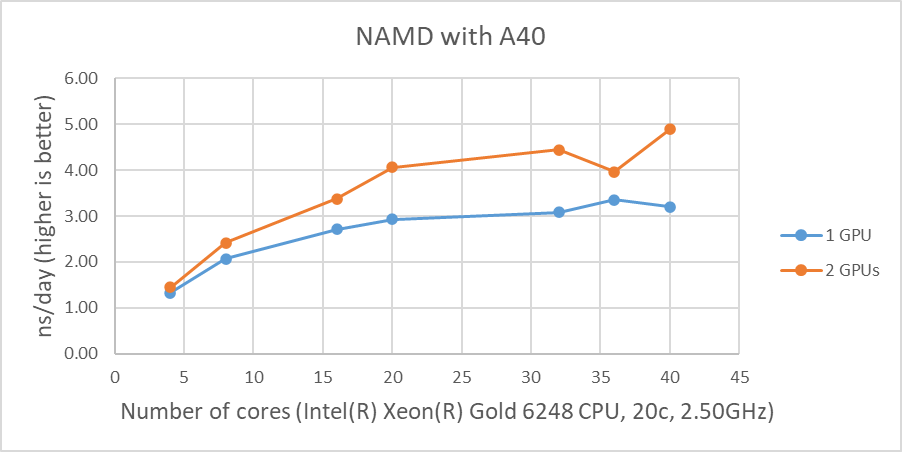 As shown in Figure 1, when four GPUs were tested , all of the GPUs except the A40 reached ~9 ns/day simulations. And, in terms of maximum performance, the A10 performs the highest number of simulations, 9.121 ns/day. However, these numbers are not true reflections of the performance due to the scalability limitations. Although all four GPU test results are similar, the A100 has a better throughput than other GPUs for the two GPU test as shown in Figure 2. Also, it is worth noting that the A10 and the A40 are not suitable for general-purpose computing due to the lack of double-precision support.

Figure 2 shows the performance comparisons among the different GPUs we tested in this study. Again, the A30 performed better than the A10 up to the 16 cores. It is difficult to determine  why the A30 doesn’t perform as well with a large number of active CPU cores(20 and more). 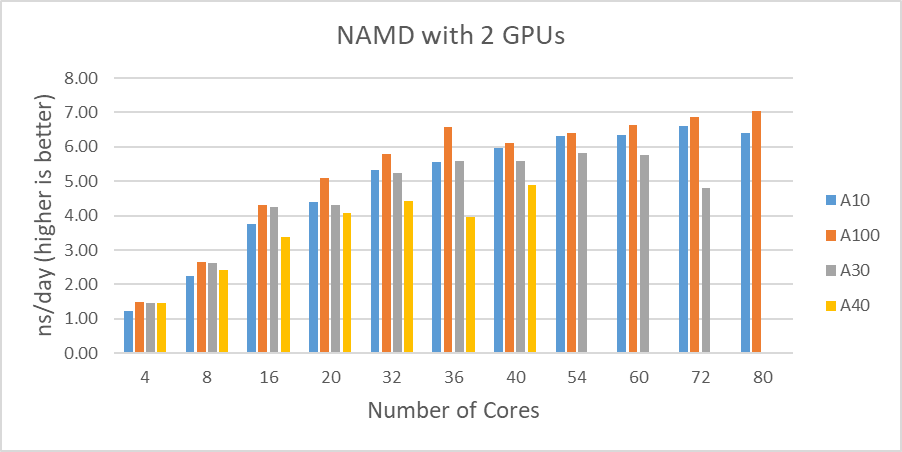 The A100 shows a dominant performance and is the most capable card among the A-series GPUs. Although the A30 did not perform as well as the A10 in our test , it is another outstanding choice for versatile applications.

The A10 performed well compared to the A30, and it is the successor of the T4, which was the most cost-effective solution for specific applications such as genomics data analysis.

Since it is not possible to obtain the accurate performance differences among A-series GPUs from this study, further investigation is necessary to achieve  a clear picture of these general purpose GPUs. 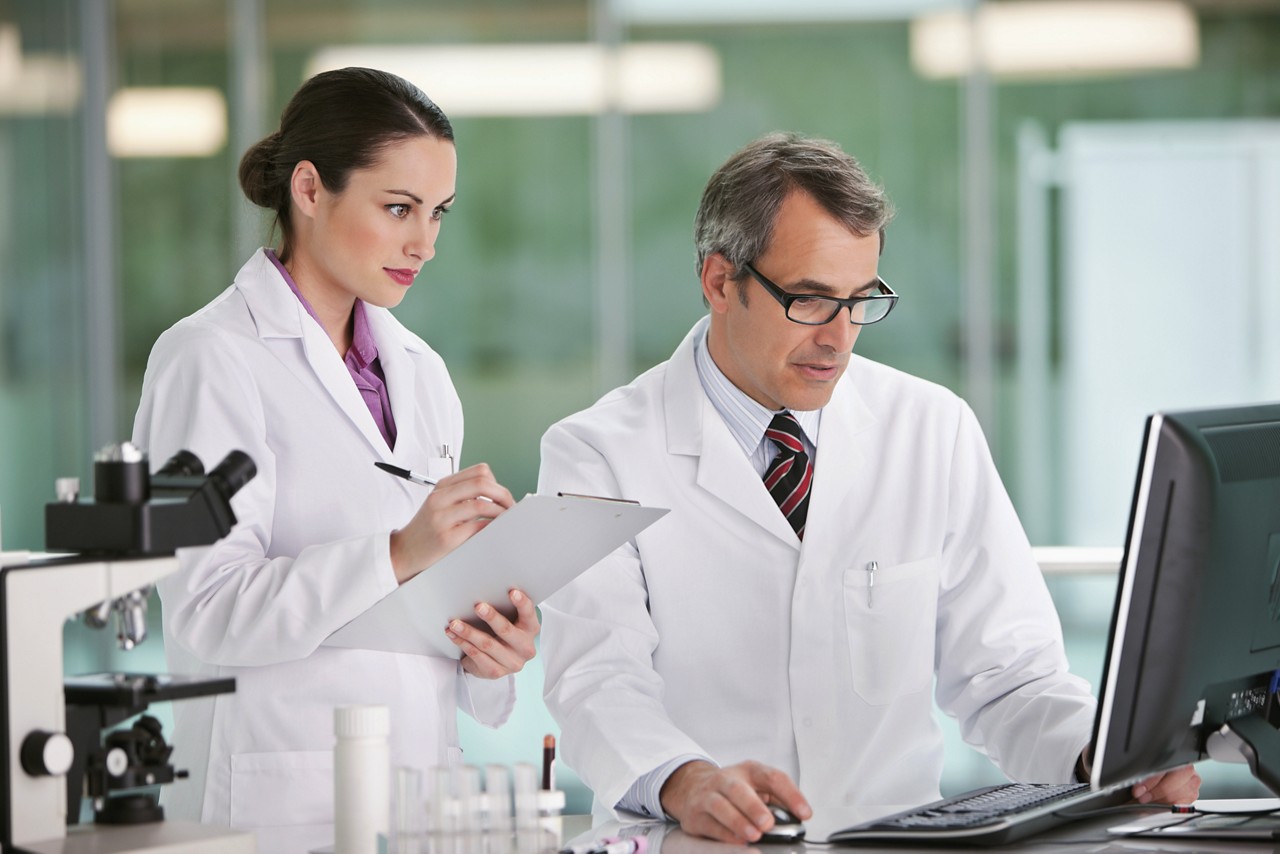 Over the past decade, graphics processing units, or GPUs, have become popular in scientific computing because of their great ability to exploit a high degree of parallelism. NVIDIA has a handful of life sciences applications optimized and run on their general-purpose GPUs. Unfortunately, these GPUs can only be programmed with CUDA, OpenACC, and the OpenCL framework. Most members of the life sciences community are not familiar with these frameworks, and so few biologists or bioinformaticians can make efficient use of GPU architectures. However, GPUs have been making inroads into the molecular dynamics simulation (MDS) field since MD was developed in the 1950s. MDS requires heavy computational work to simulate biomolecular structures or their interactions.

In this blog, we tested two MDS applications; NAMD, and LAMMPS using the Dell EMC PowerEdge XE8545 server with NVIDIA A100 GPUs. Since the XE8545 server does not support NVIDIA V100 GPU, we can roughly estimate the performance boost with the A100 from our previous tests.

These two applications are free and open-source parallel MD packages designed for analyzing the physical movements of atoms and molecules.

The test server configuration is summarized in the following table.

Figure 1 shows the performance of 4x A100 GPUs with the STMV dataset. NAMD uses ++p options to specify the number of worker threads, and as recommended, is equal to the total number of cores minus the total number of GPUs. However, the number of total cores in the Milan Eypc 7003 family of processors, such as the Eypc 7713 that is used in the testing system, does not follow the generic recommendation. It seems to be around 79 to 90 cores. The optimal number of cores depends on the data size. Close to 9-nanosecond simulations (ns) per day performance is a significant performance gain from the NVIDIA V100 tests that we ran previously. It is difficult to say the performance gain is the sole contribution of the new A100 GPUs because the comparison of the 16 GB V100 on the Intel Skylake platform to the 40 GB A100 on the AMD Milan platform may not be valid. 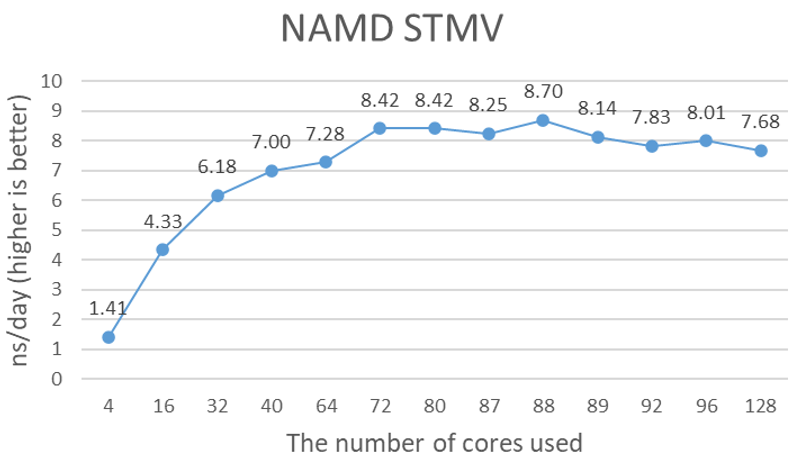 The purpose of an additional test with 3 million atom protein tetramers is to confirm that the STMV test results are not artificial due to the relatively small icosahedron structure of SMTV, and the partial simulation of assembly and disassembly processes. Figure 2 shows the nanosecond simulations per day plot for 3000k-atom data. 2.1 ns/day seems to be close to the maximum performance with 64 cores.

Large-scale Atomic/Molecular Massively Parallel Simulator, or LAMMPS, is a classical molecular dynamics code and has potentials for solid-state materials (metals and semiconductors), soft matter (biomolecules and polymers), and coarse-grained or mesoscopic systems. LAMMPS can model atoms, or can be used as a parallel particle simulator at the atomic, meso, or continuum scale. LAMMPS runs on single processors, or in parallel using message-passing techniques and spatial decomposition of the simulation domain. LAMMPS was built with GCC 11.1, OpenMPI 4.1.1, and CUDA 11.2 from the source. The 465k-atom system was selected from HECBioSim. 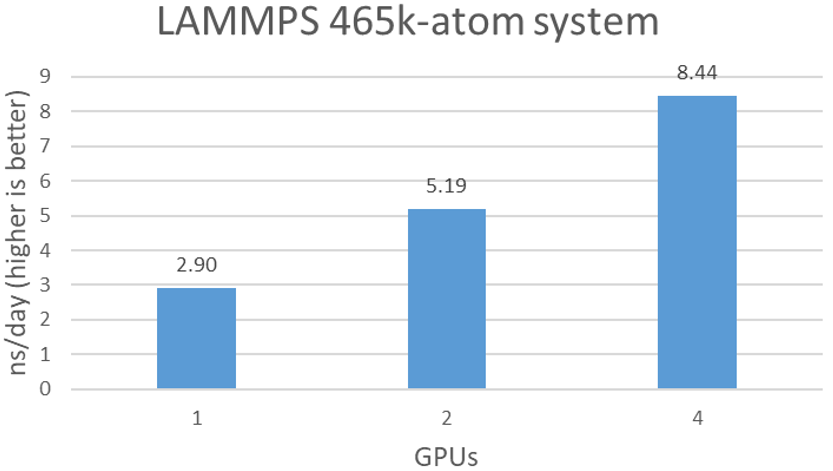 Although it is not possible to compare the performance of the A100 and the V100 from this study, the Milan CPUs and A100 show a strong synergy between more cores with better and faster GPUs. Running NAMD and LAMMPS on the XE8545 with the A100 can deliver a better performance than a system with the V100.