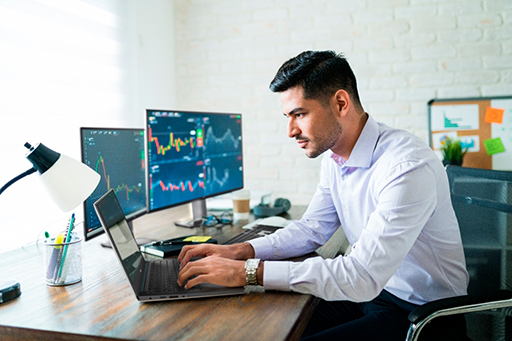 When writing code in CUDA, it is natural to ask if that code can be extended to other GPUs. This extension can allow the “write once, run anywhere” programming paradigm to materialize. While this programming paradigm is a lofty goal, we are in a position to achieve the benefits of porting code from CUDA (for NVIDIA GPUs) to HIP (for AMD GPUs) with little effort. This interoperability provides added value because developers do not have to rewrite code starting at the beginning. It not only saves time, but also saves system administrator efforts to run workloads on a data center depending on hardware resource availability.

This blog provides a brief overview of the AMD ROCm™ platform. It describes a use case that ports the peer-to-peer GPU bandwidth latency test (p2pbandwidthlatencytest) from CUDA to Heterogeneous-Computing Interface for Portability (HIP) to run on an AMD GPU.

Introduction to ROCm and HIP

ROCm is an open-source software platform for GPU-accelerated computing from AMD. It supports running of HPC and AI workloads across different vendors. The following figures show the core ROCm components and capabilities: 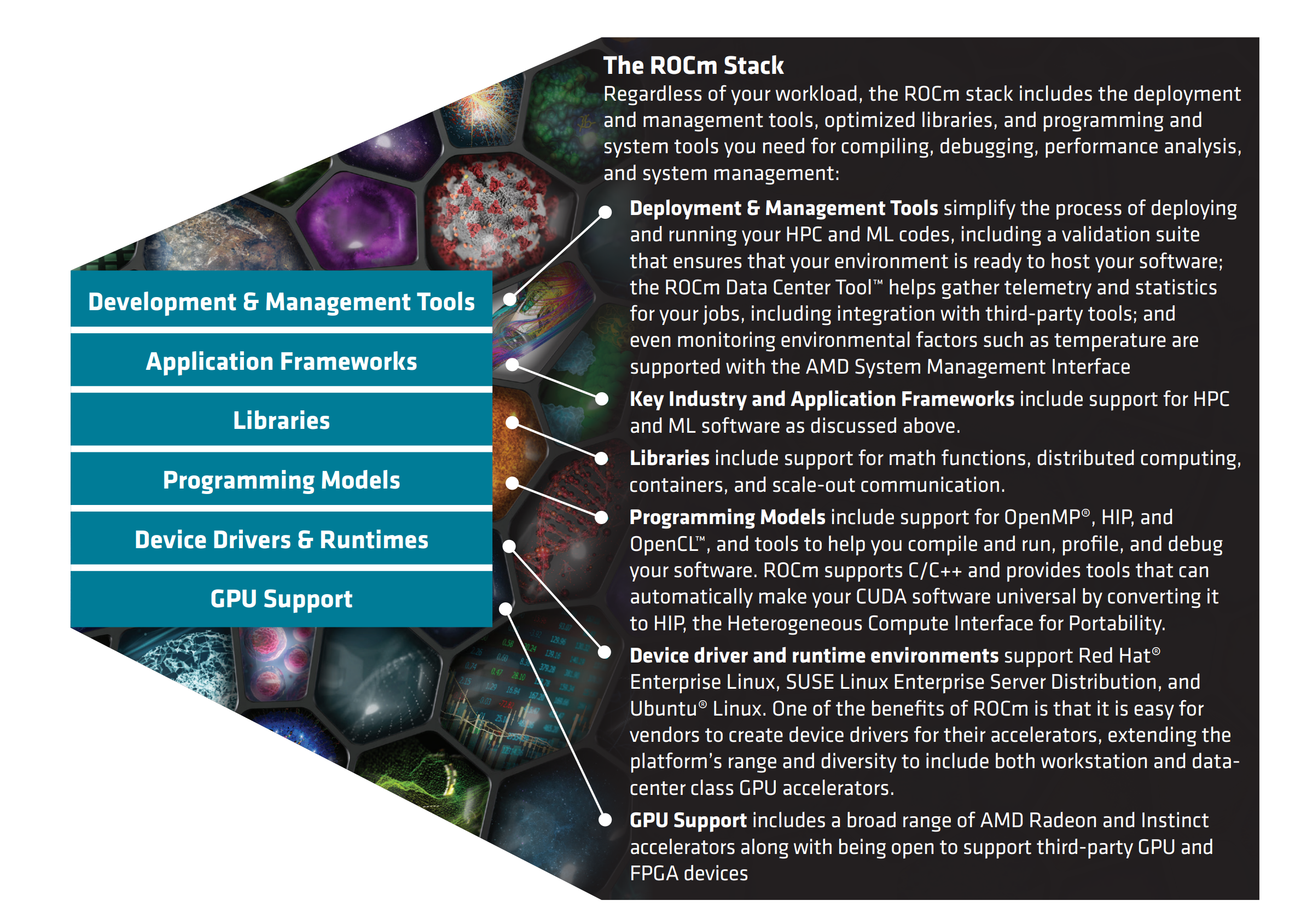 ROCm is a full package of all that is needed to run different HPC and AI workloads. It includes a collection of drivers, APIs, and other GPU tools that support AMD Instinct™ GPUs as well as other accelerators. To meet the objective of running workloads on other accelerators, HIP was introduced.

HIP is AMD’s GPU programming paradigm for designing kernels on GPU hardware. It is a C++ runtime API and a programming language that serves applications on different platforms.

One of the key features of HIP is the ability to convert CUDA code to HIP, which allows running CUDA applications on AMD GPUs. When the code is ported to HIP, it is possible to run HIP code on NVIDIA GPUs by using the CUDA platform-supported compilers (HIP is C++ code and it provides headers that support translation between HIP runtime APIs to CUDA runtime APIs). HIPify refers to the tools that translate CUDA source code into HIP C++.

Introduction to the CUDA p2pbandwidthLatencyTest

For example, during training of large-scale data and model parallel deep learning models, it is imperative to ensure that GPUs can communicate after a deadlock or other issues while building and debugging a model. There are other use cases for this test such as BIOS configuration performance improvements, driver update performance implications, and so on.

The following steps port the p2pbandwidthLatencyTest from CUDA to HIP:

Converting the p2pbwLatencyTest from CUDA to HIP

After you download the p2pbandwidthLatencyTest, convert the test from CUDA to HIP.

There are two approaches to convert CUDA to HIP:

To convert the p2pbwLatencyTest from CUDA to HIP:

HIPify is a time-saving tool for converting CUDA code to run on AMD Instinct accelerators. Because there are consistent improvements from the AMD software team, there are regular releases in the software stack .  The HIPify path is an automated way to support conversion from CUDA to a generalized framework. After your code is ported to HIP, this conversion allows for running code on different accelerators from different vendors. This feature helps to enable further developments from a common platform.

This blog showed how to convert a sample use case from CUDA to HIP using the hipify-perl tool.

The Dell PowerEdge R7525 server powered with 2nd Gen AMD EPYC processors was released as part of the Dell server portfolio. It is a 2U form factor rack-mountable server that is designed for HPC workloads. Dell Technologies recently added support for NVIDIA A100 GPGPUs to the PowerEdge R7525 server, which supports up to three PCIe-based dual-width NVIDIA GPGPUs. This blog describes the single-node performance of selected HPC applications with both one- and two-NVIDIA A100 PCIe GPGPUs.

The NVIDIA Ampere A100 accelerator is one of the most advanced accelerators available in the market, supporting two form factors:

The PowerEdge R7525 server supports only the PCIe version of the NVIDIA A100 accelerator.

The following table compares the NVIDIA A100 GPGPU with the NVIDIA V100S GPGPU:

The NVIDIA A100 GPGPU brings innovations and features for HPC applications such as the following:

The following table shows the PowerEdge R7525 server configuration that we used for this blog:

The following sections provide our benchmarks results with observations.

High Performance Linpack (HPL) is a standard HPC system benchmark. This benchmark measures the compute power of the entire cluster or server. For this study, we used HPL compiled with NVIDIA libraries.

The following figure shows the HPL performance comparison for the PowerEdge R7525 server  with either NVIDIA A100 or NVIDIA V100S GPGPUs:

Figure1: HPL performance on the PowerEdge R7525 server with the NVIDIA A100 GPGPU compared to the NVIDIA V100SGPGPU

The problem size (N) is larger for the NVIDIA A100 GPGPU due to the larger capacity of GPU memory. We adjusted the block size (NB) used with the:

The AMD EPYC processors provide options for multiple NUMA combinations.  We found that the best value of 4 NUMA per socket (NPS=4), with NUMA per socket 1 and 2 lower the performance by 10 percent and 5 percent respectively. In a single PowerEdge R7525 node, the NVIDIA A100 GPGPU delivers 12 TF per card using this configuration without an NVLINK bridge. The PowerEdge R7525 server with two NVIDIA A100 GPGPUs delivers 2.3 times higher HPL performance compared to the NVIDIA V100S GPGPU configuration. This performance improvement is credited to the new double-precision Tensor Cores that accelerate FP64 math.

The following figure shows power consumption of the server while running HPL on the NVIDIA A100 GPGPU in a time series. Power consumption was measured with an iDRAC. The server reached 1038 Watts at peak due to a higher GFLOPS number. 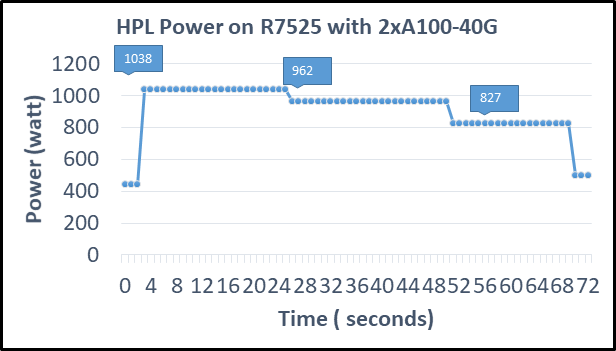 The High Performance Conjugate Gradient (HPCG)  benchmark is based on a conjugate gradient solver, in which the preconditioner is a three-level hierarchical multigrid method using the Gauss-Seidel method.

As shown in the following figure, HPCG performs at a rate 70 percent higher with the NVIDIA A100 GPGPU due to higher memory bandwidth: 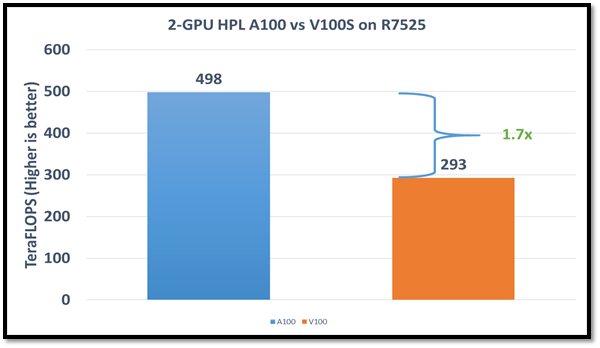 Due to different memory size, the problem size used to obtain the best performance on the NVIDIA A100 GPGPU was 512 x 512 x 288 and on the NVIDIA V100S GPGPU was 256 x 256 x 256. For this blog, we used NUMA per socket (NPS)=4 and we obtained results without an NVLINK bridge. These results show that applications such as HPCG, which fits into GPU memory, can take full advantage of GPU memory and benefit from the higher memory bandwidth of the NVIDIA A100 GPGPU.

In addition to these two basic HPC benchmarks (HPL and HPCG), we also tested GROMACS, an HPC application. We compiled GROMACS 2020.4 with the CUDA compilers and OPENMPI, as shown in the following table: 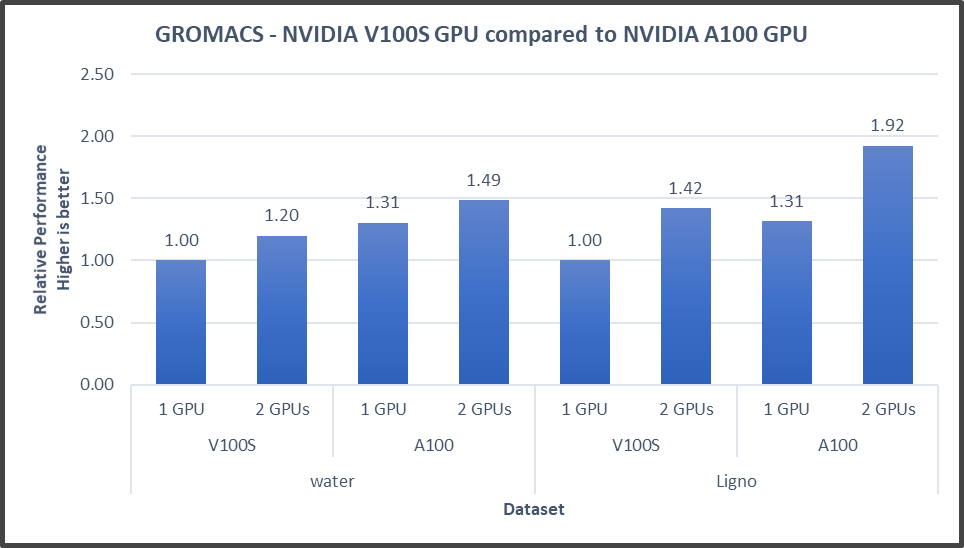 The GROMACS build included thread MPI (built in with the GROMACS package). All performance numbers were captured from the output “ns/day.” We evaluated multiple MPI ranks, separate PME ranks, and different nstlist values to achieve the best performance. In addition, we used settings with the best environment variables for GROMACS at runtime. Choosing the right combination of variables avoided expensive data transfer and led to significantly better performance for these datasets.

GROMACS performance was based on a comparative analysis between NVIDIA V100S and NVIDIA A100 GPGPUs. Excerpts from our single-node multi-GPU analysis for two datasets showed a performance improvement of approximately 30 percent with the NVIDIA A100 GPGPU. This result is due to improved memory bandwidth of the NVIDIA A100 GPGPU. (For information about how the GROMACS code design enables lower memory transfer overhead, see Developer Blog: Creating Faster Molecular Dynamics Simulations with GROMACS 2020.)

The Dell PowerEdge R7525 server equipped with NVIDIA A100 GPGPUs shows exceptional performance improvements over servers equipped with previous versions of NVIDIA GPGPUs for applications such as HPL, HPCG, and GROMACS. These performance improvements for memory-bound applications such as HPCG and GROMACS can take advantage of higher memory bandwidth available with NVIDIA A100 GPGPUs. 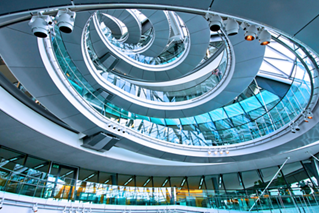 The Dell EMC PowerEdge R7525 server, which was recently released, supports NVIDIA A100 Tensor Core GPUs. It is a two-socket, 2U rack-based server that is designed to run complex workloads using highly scalable memory, I/O capacity, and network options. The system is based on the 2nd Gen AMD EPYC processor (up to 64 cores), has up to 32 DIMMs, and has PCI Express (PCIe) 4.0-enabled expansion slots. The server supports SATA, SAS, and NVMe drives and up to three double-wide 300 W or six single-wide 75 W accelerators.

This blog focuses on the deep learning training performance of a single PowerEdge R7525 server with two NVIDIA  A100-PCIe GPUs. The results of using two NVIDIA V100S GPUs in the same PowerEdge R7525 system are presented as reference data. We also present results from the cuBLAS GEMM test and the ResNet-50 model form the MLPerf Training v0.7 benchmark.

The following table provides the configuration details of the PowerEdge R7525 system under test:

The CUDA Basic Linear Algebra (cuBLAS) library is the CUDA version of standard basic linear algebra subroutines, part of CUDA-X. NVIDIA provides the cublasMatmulBench binary, which can be used to test the performance of general matrix multiplication (GEMM) on a single GPU. The results of this test reflect the performance of an ideal application that only runs matrix multiplication in the form of the peak TFLOPS that the GPU can deliver. Although GEMM benchmark results might not represent real-world application performance, it is still a good benchmark to demonstrate the performance capability of different GPUs.

Because FP16, FP32, and TF32 precision formats are imperative to deep learning training performance, the blog focuses on these formats.

The following figure shows the results that we observed: 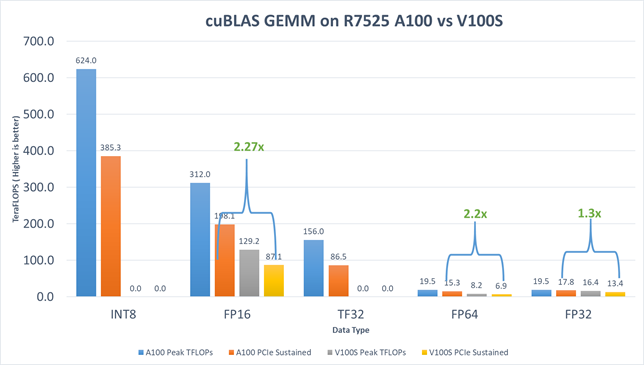 MLPerf is a benchmarking suite that measures the performance of machine learning (ML) workloads. The MLPerf Training benchmark suite measures how fast a system can train ML models.

The following figure shows the performance results of the ResNet-50 under the MLPerf Training v0.7 benchmark: 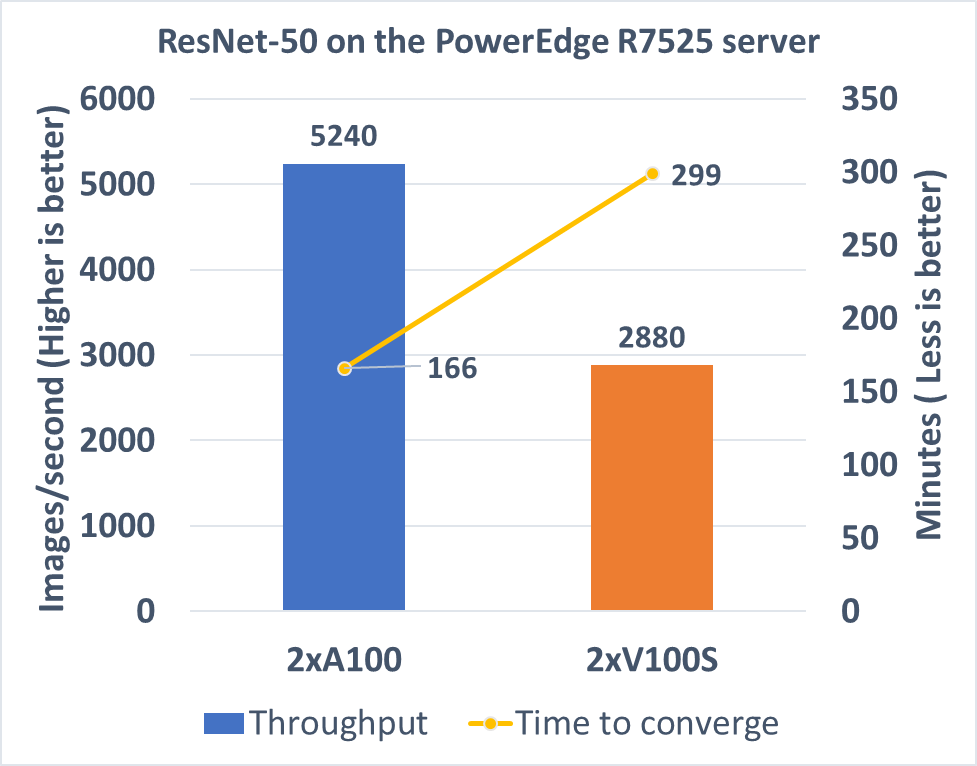 We plan to provide performance studies on: