Robin Systems has a most excellent platform that is well suited to simultaneously running a mix of workloads in a containerized environment.  Containers offer isolation of varied software stacks.  Kubernetes is the control plane that deploys the workloads across nodes and allows for scale-out, adaptive processing.  Robin adds customizable templates and life cycle management to the mix to create a killer platform.

AI which includes the likes of machine learning for things like scikit-learn with dask, H2o.ai, spark MLlib and PySpark along with deep learning which includes tensor flow, PyTorch, MXNET, keras and Caffe2 are all things that can be run simultaneously in Robin.   Nodes are identified by their resources during provisioning for cores, memory, GPUs and storage.

Cultivated data pipelines can be constructed with a mix of components.  Consider a use case with ingest from kafka, store to Cassandra and then run spark MLlib to find loans submitted from last week that will be denied.   All that can be automated with Robin.

The as-a-service aspect for things like MLops & AutoML can be implemented with a combination of Robin capabilities and other software to deliver a true AI-as-a-Service experience.

Nodes to run these workloads on can support disaggregated compute and storage.  Some sample servers might be a combination of Dell PowerEdge C6520s for compute & R750s for storage.  The compute servers are very dense and can run four server hosts in 2U offering a full range of Intel Ice Lake processors.  For storage nodes the R750s can have onboard NVMe or SSDs (up to 28).   For the OS image a hot swappable m.2 BOSS card with self-contained RAID1 can be used for Linux with all 15G servers. 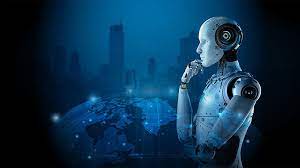 So You'd Like an Easy Button for ML/DL...Look No Further Than Cnvrg.io on Dell

I consult with various customers on their AI/ML/DL needs while coming up with architectures, designs and solutions that are durable, scalable, flexible, efficient, performant, sensible and cost effective.  After having seen perhaps 100 different opportunities I have some observations and yes suggestions on how to do things better.

Firstly, there’s an overwhelming desire for DIY.  On the surface the appeal is that it’s easy to download the likes of tensor flow with pip, add some python code to point to four GPUs on four different servers, collect some data, train your model and put it into production.  This thinking rarely considers concurrency, multi-tenancy, scheduling, management, sharing and many more.  What I can safely state is that this path is the hardest, takes the longest, costs more, creates confusion, fosters low asset utilization and leads to high project rate failures.

Secondly most customers are not concerned with infrastructure, scalability, multi-tenancy, architecture and such at the outset.  They are after thoughts and their main focus on building a house is let’s get started and so we can get finished sooner.  We don’t need a plan do we?

Thirdly most customers are struggling so when they reach out to talk to their friends down the road they’re all moving slowly, doing it themselves, struggling so it’s ok right?

I think there’s a much better way and it all has to do with the software stack.  A cultivated software stack that can manage jobs, configure the environment, share resources, scale-out easily, schedule jobs based on priorities and resource availability, support multi-tenancy, record and share results, etc….is just what the doctor ordered.  It can be cheap, efficient, speed up projects and improve the success rate.  Enter cnvrg.io, now owned by Intel, and you have a best of breed solution to these items and much more.

Recently I collected some of the reasons why I think cnvrg.io the the cultivated AI stack you need for all your AI/ML/DL projects:

Cnvrg.io is a Dell Technologies partner and we have a variety of solutions and platform options.   If you’d like to hear more please do drop me an email at Mike.King2@Dell.com 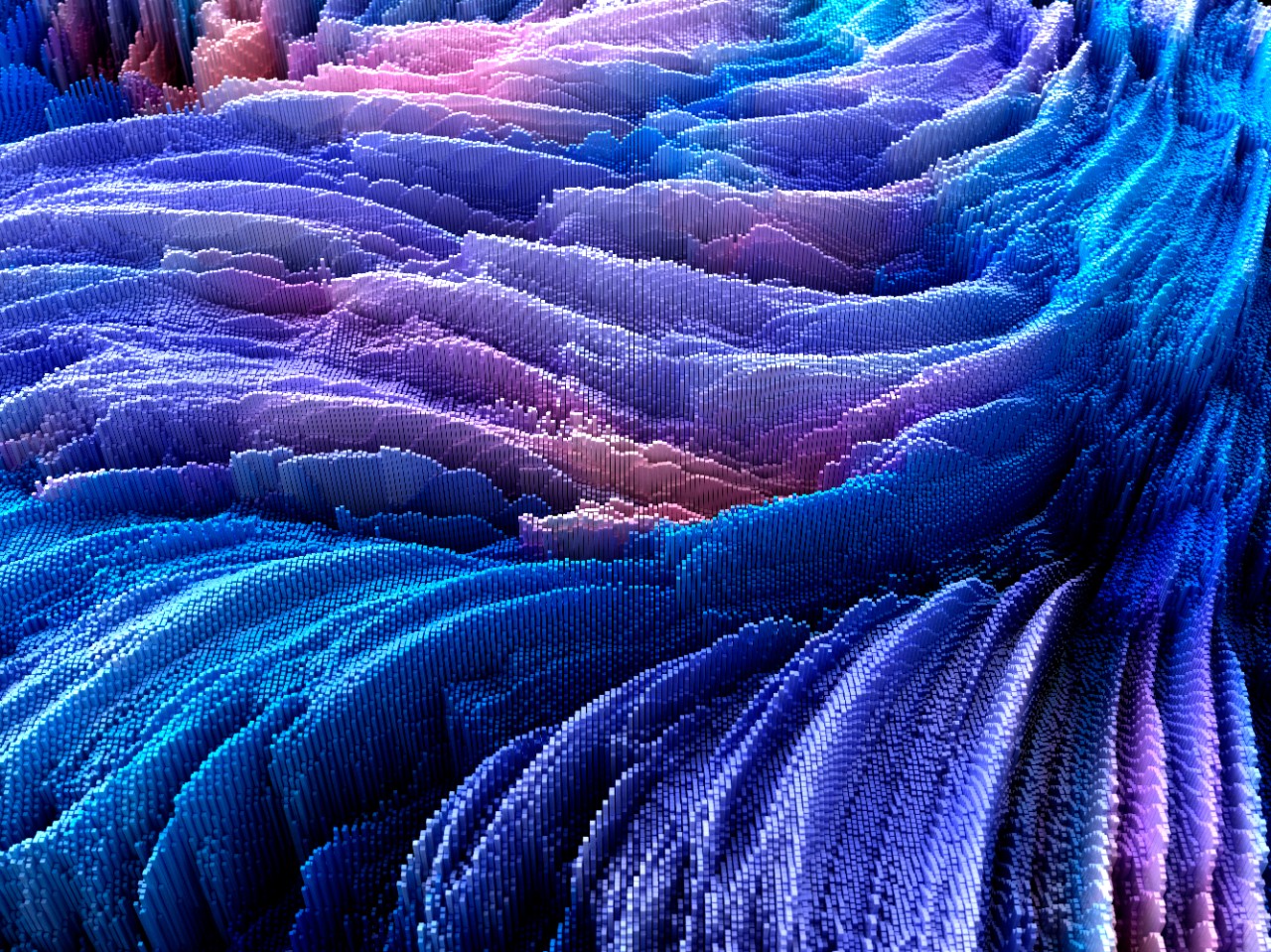 Dell Technologies has completed the successful submission of MLPerf Training, which marks the seventh round of submission to MLCommons™. This blog provides an overview and highlights the performance of the Dell PowerEdge R750xa, XE8545, and DSS8440 servers that were used for the submission.

This round of submission does not include new benchmarks or changes in the existing benchmarks. A change is introduced in the submission compliance checker.

This round adds one-sided normalization to the checker to reduce variance in the number of steps to converge. This change means that if a result converges faster than the RCP mean within a certain range, the checker normalizes the results to the RCP mean. This normalization was not available in earlier rounds of submission.

For Dell submission for MLPerf Training v2.1, we included:

Figure 1 shows our submission in which the workloads span across image classification, lightweight and heavy object detection, speech recognition, natural language processing, recommender systems, medical image segmentation, and reinforcement learning. There were different NVIDIA GPUs including the A100, with PCIe and SXM4 form factors having 40 GB and 80 GB VRAM and A30.

The Minigo on the PowerEdge R750xa server is a first-time submission, and it takes around 516 minutes to run to target quality. That submission has 4x A100 PCIe 80 GB GPUs.

Our results have increased in count from 41 to 45. This increased number of submissions helps customers see the performance of the systems using different PowerEdge servers, GPUs, and CPUs. With more results, customers can expect to see the influence of using different hardware settings that can play a vital role in time to convergence.

We have several procured winning titles that demonstrate the higher performance of our systems in relation to other submitters, starting with the highest number of results across all the submitters. Some other titles include the top position in the time to converge for BERT, ResNet, and Mask R-CNN with our PowerEdge XE8545 server powered by NVIDIA A100-40GB GPUs.

Improvement in Performance for BERT and Mask R-CNN 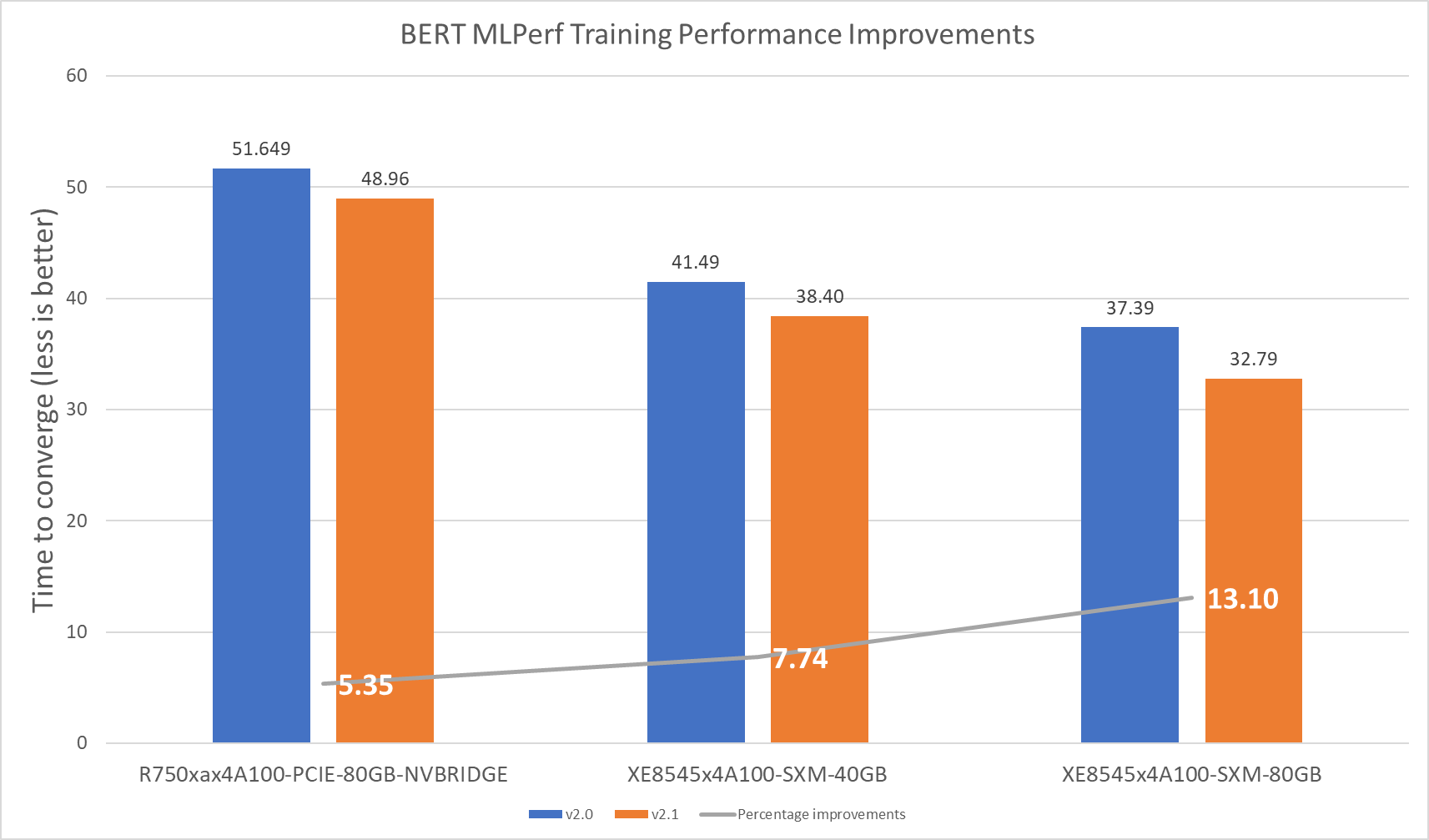 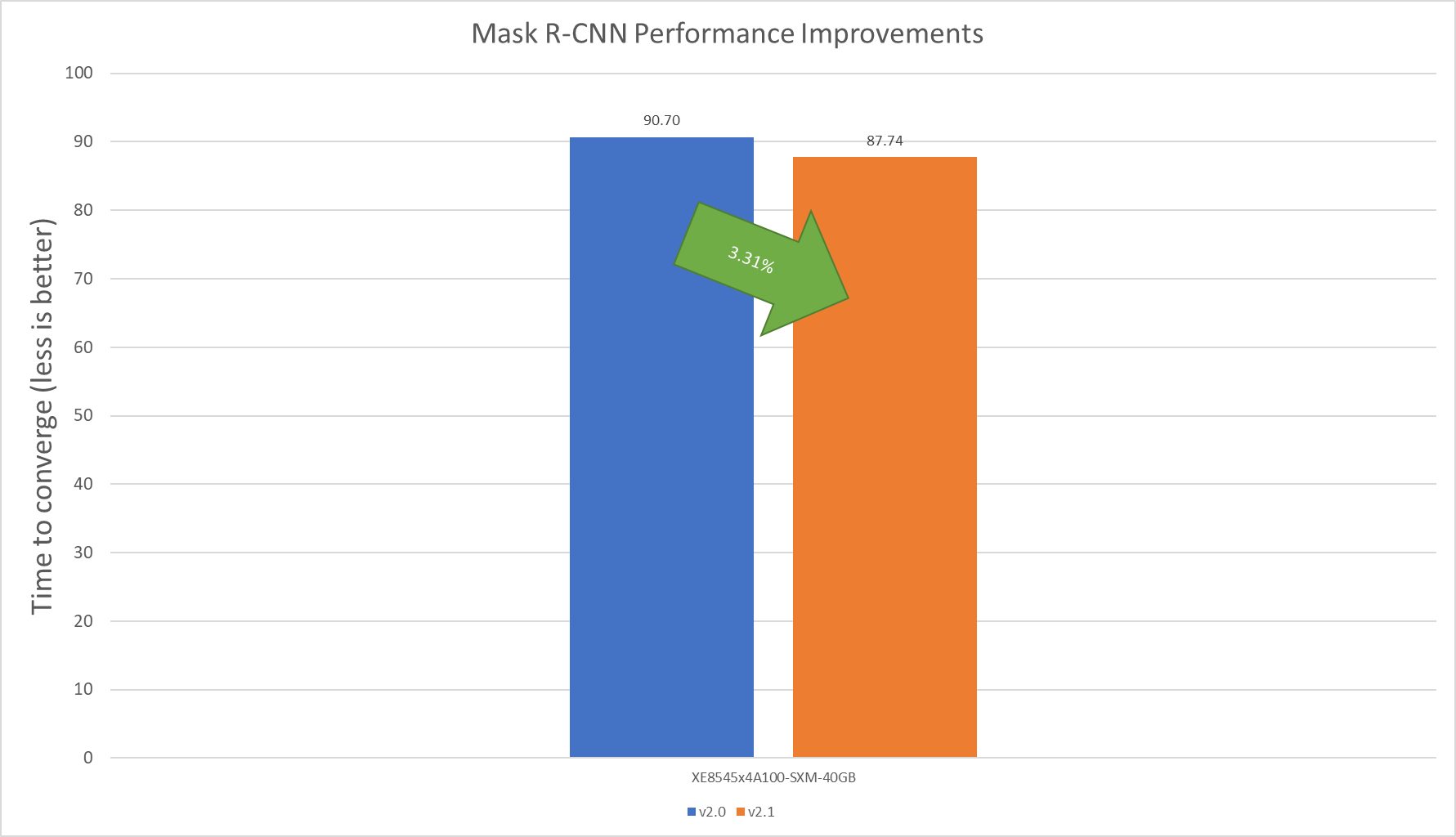 Figure 3 shows the improvements seen with the PowerEdge XE8545 server with A100 GPUs. There is a 3.31 percent improvement in time to convergence with MLPerf v2.1.

For both BERT and Mask R-CNN, the improvements are software-based. These results show that software-only improvements can reduce convergence time. Customers can benefit from similar improvements without any changes in their hardware environment.

Performance Difference Between PCIe and SXM4 Form Factor with A100 GPUs 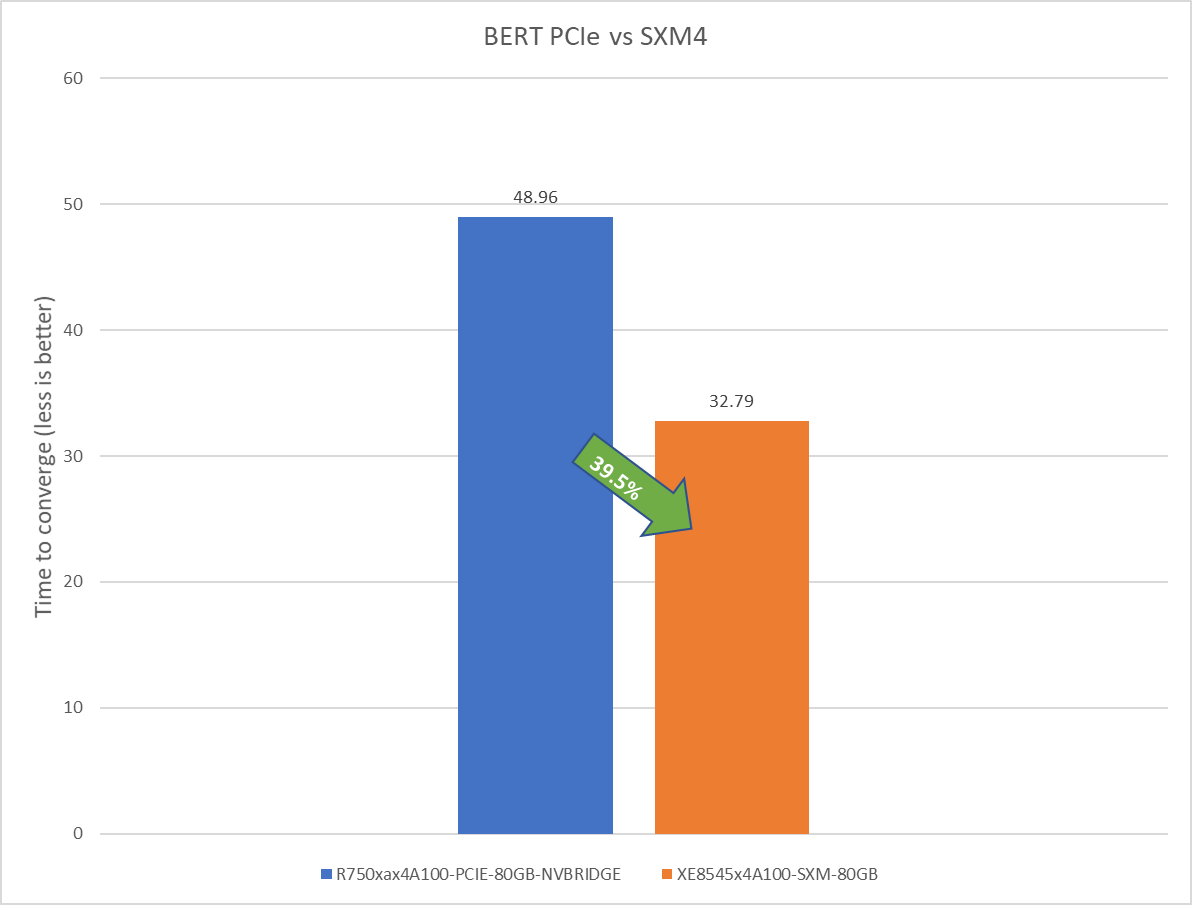 Figure 4.     SXM4 form factor compared to PCIe for the BERT 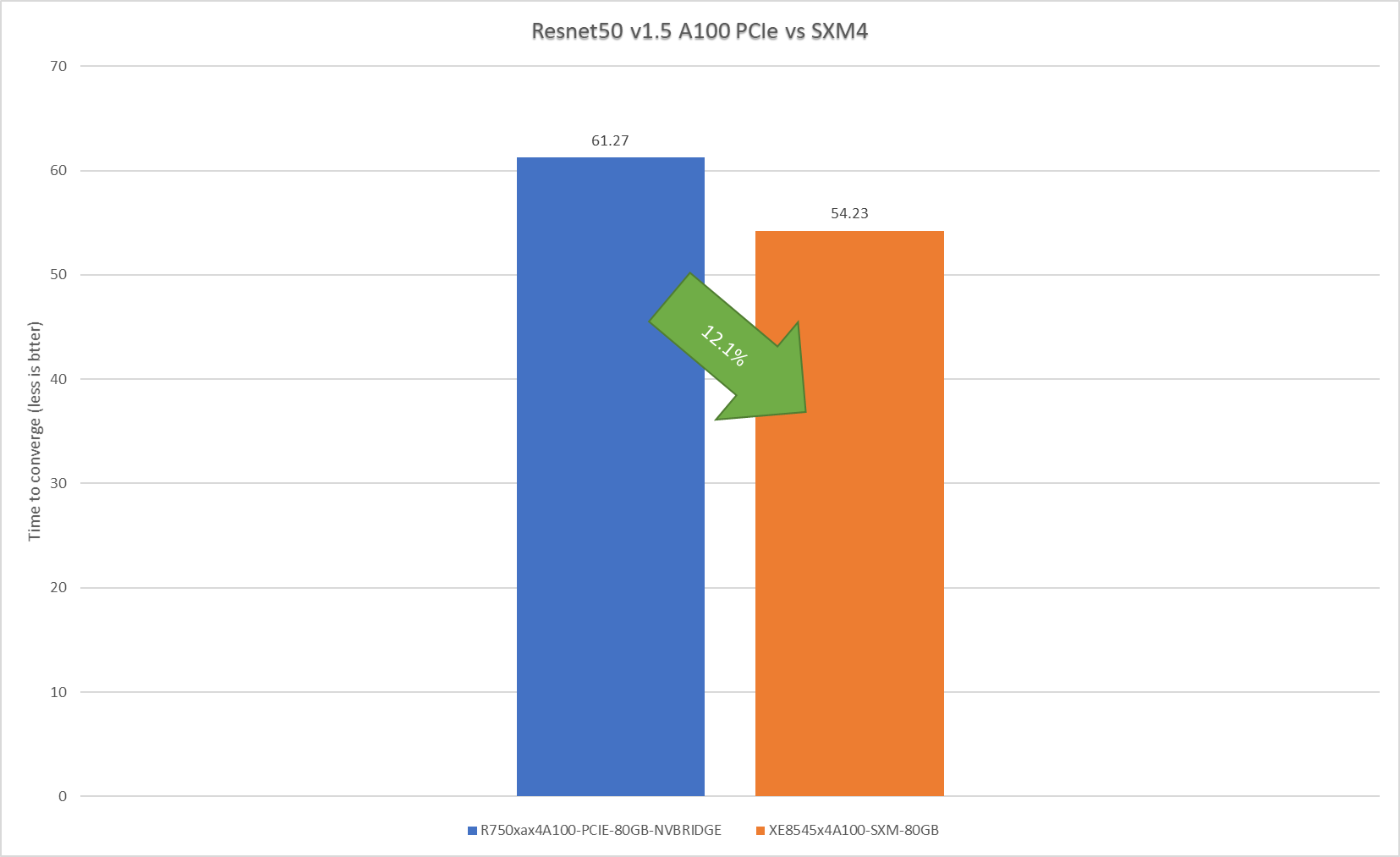 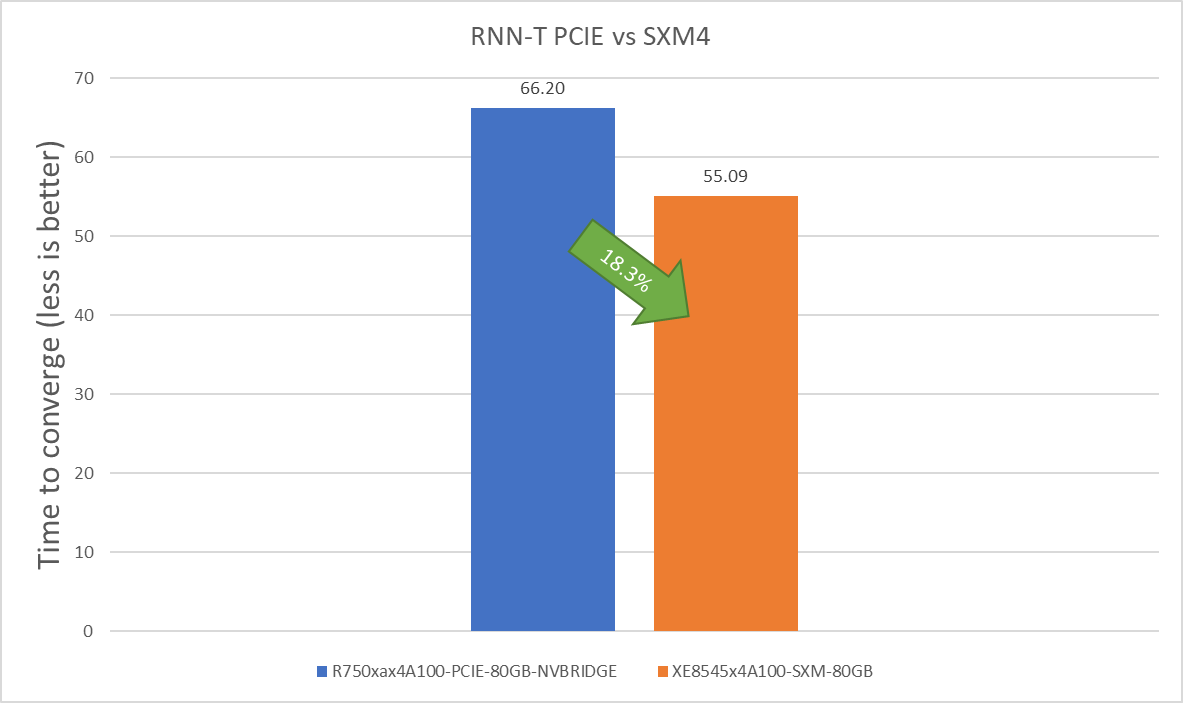 Figure 6.     SXM4 form factor compared to PCIe for the RNN-T

Figures 4, 5, and 6 and Table 1 show that SXM form factor is faster than the PCIe form factor for BERT, Resnet50 v1.5, and RNN-T workloads.

The SXM form factor typically consumes more power and is faster than PCIe. For the above workloads, the minimum percentage improvement in convergence that customers can expect is in double digits, ranging from approximately 12 percent to 40 percent, depending on the workload.

Multinode performance assessment is more important than ever. With the advent of large models and different parallelism techniques, customers have an ever-increasing need to find results faster. Therefore, we have submitted several multinode results to assess scaling performance. 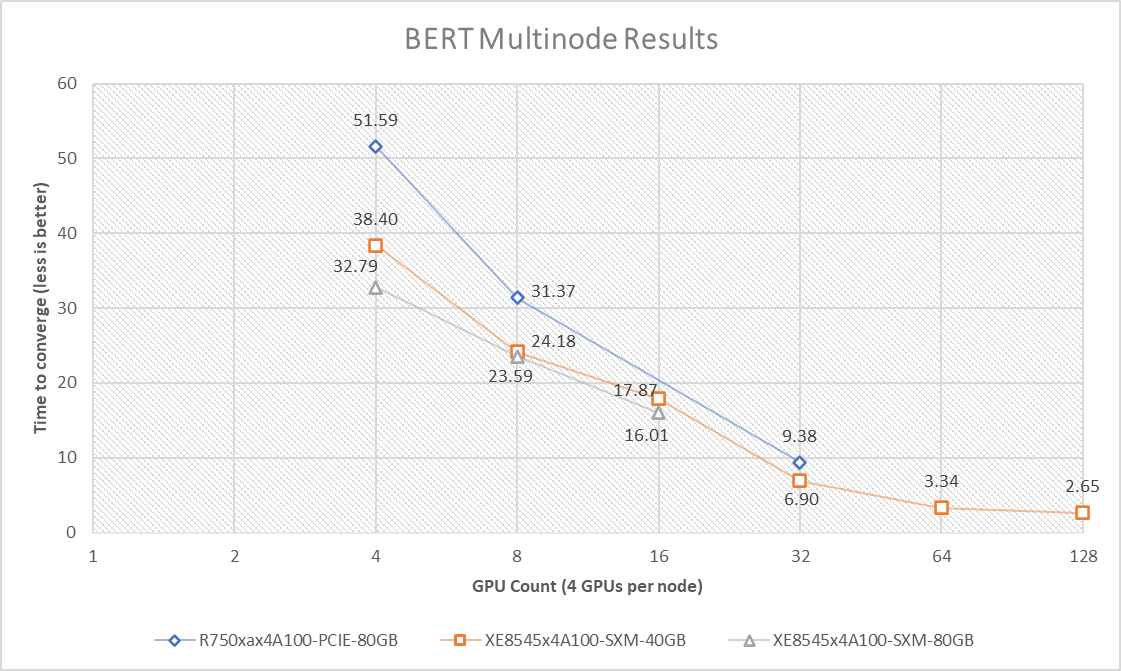 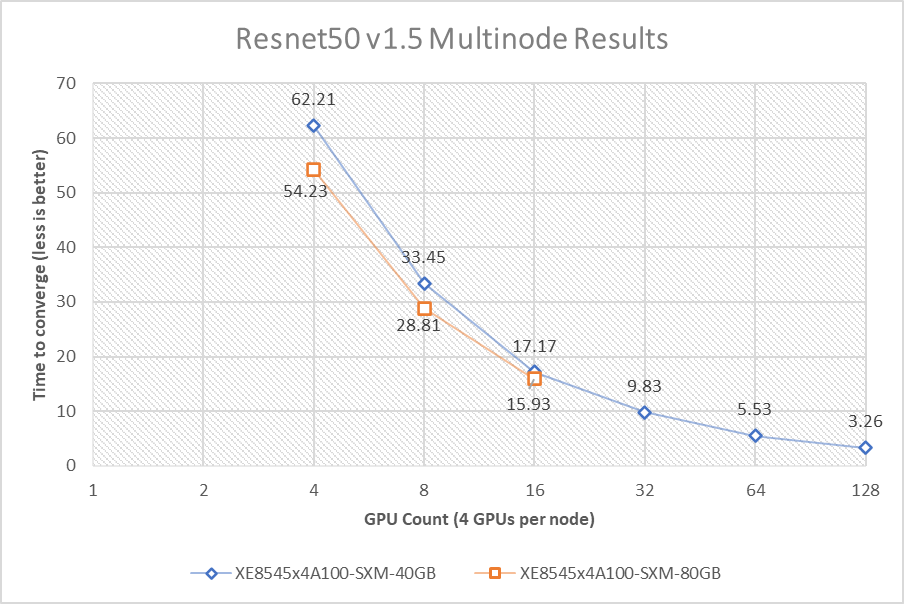 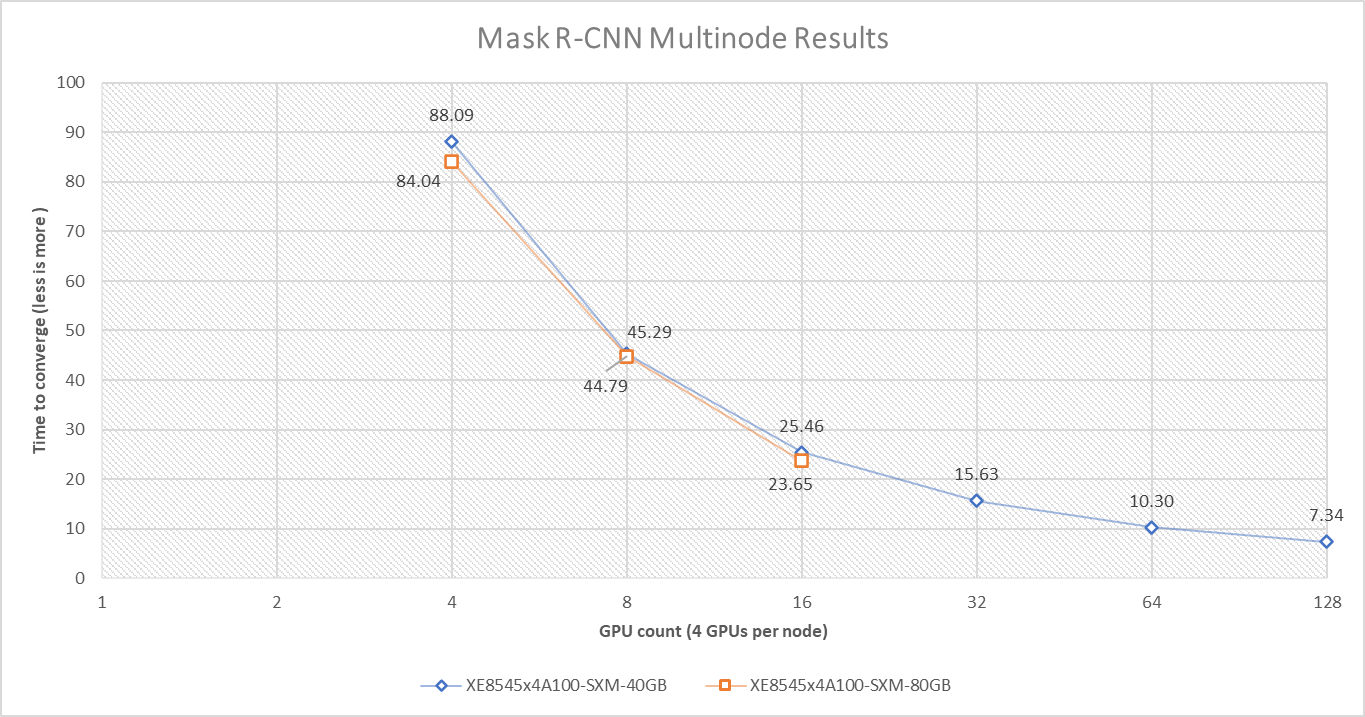 As shown in Figures 7, 8, and 9, the multinode scaling results of the BERT, Resnet50, and Mask R-CNN are linear or nearly linear scaled. This shows that Dell servers offer outstanding performance with single-node and multinode scaling.

The findings described in this blog show that: