The MLPerf benchmarking suite measures the performance of machine learning (ML) workloads. Currently, these benchmarks provide a consistent way to measure accuracy and throughput for the following aspects of the ML life cycle:

In the MLPerf inference evaluation framework, the LoadGen load generator sends inference queries to the system under test (SUT). In our case, the SUTs are Dell EMC servers with various GPU configurations. The SUTs uses a backend (for example, TensorRT, TensorFlow, or PyTorch) to perform inferencing and returns the results to LoadGen.

MLPerf has identified four different scenarios that enable representative testing of a wide variety of inference platforms and use cases. The main differences between these scenarios are based on how the queries are sent and received:

MLPerf inference results are submitted under either of the following divisions:

To allow the like-to-like comparison of Dell Technologies results and enable our customers and partners to repeat our results, we chose to test under the Closed division, as the results in this blog show.

For any benchmark, the result submission must meet all the specifications shown in the following table. For example, if we choose the Resnet50 model, then the submission must meet the 76.46 percent target accuracy and the latency must be within 15 ms for the standard image dataset with dimensions of 224 x 224 x 3.

It is not mandatory to submit all the benchmarks. However, if a specific benchmark is submitted, then all the required scenarios for that benchmark must also be submitted.

Each data center benchmark requires the scenarios in the following table:

We selected the following servers with different types of NVIDIA GPUs as our SUT to conduct data center inference benchmarks. The following table lists the MLPerf system configurations:

The following graphs include performance metrics for the Offline and Server scenarios. 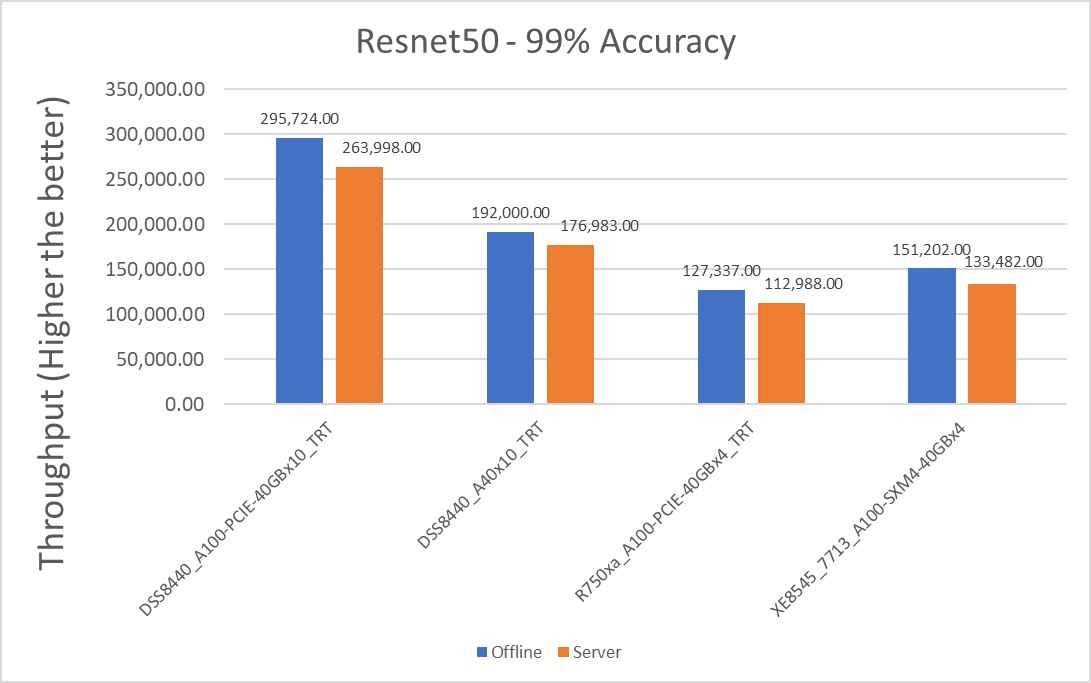 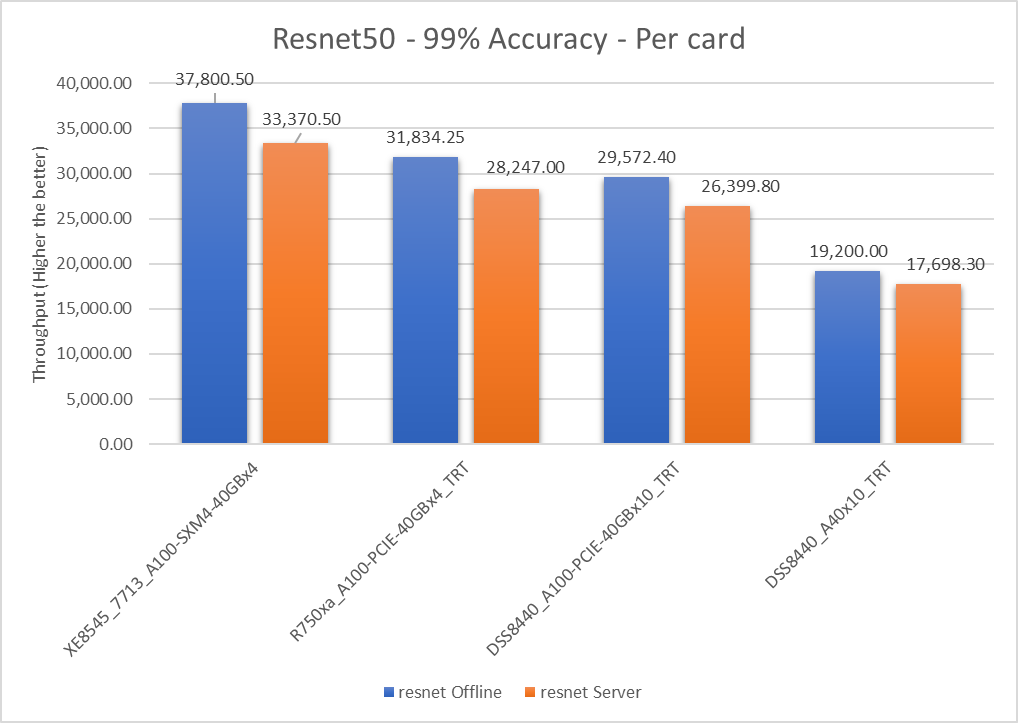 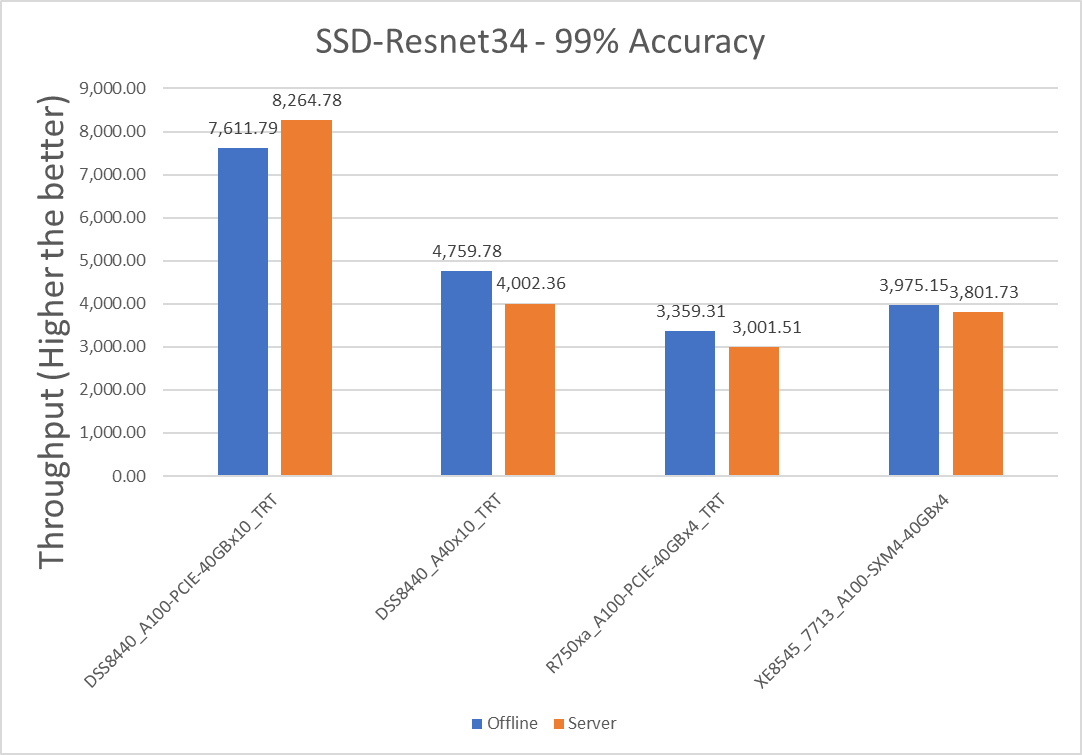 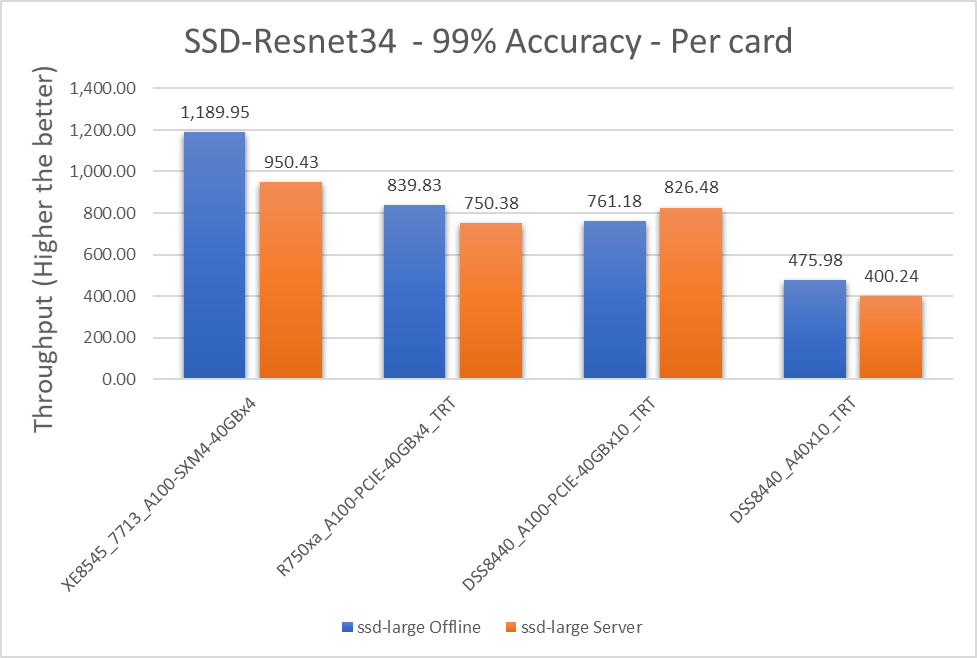 Table 6: Per card numbers and scenario percentage difference on SSD-Resnet34 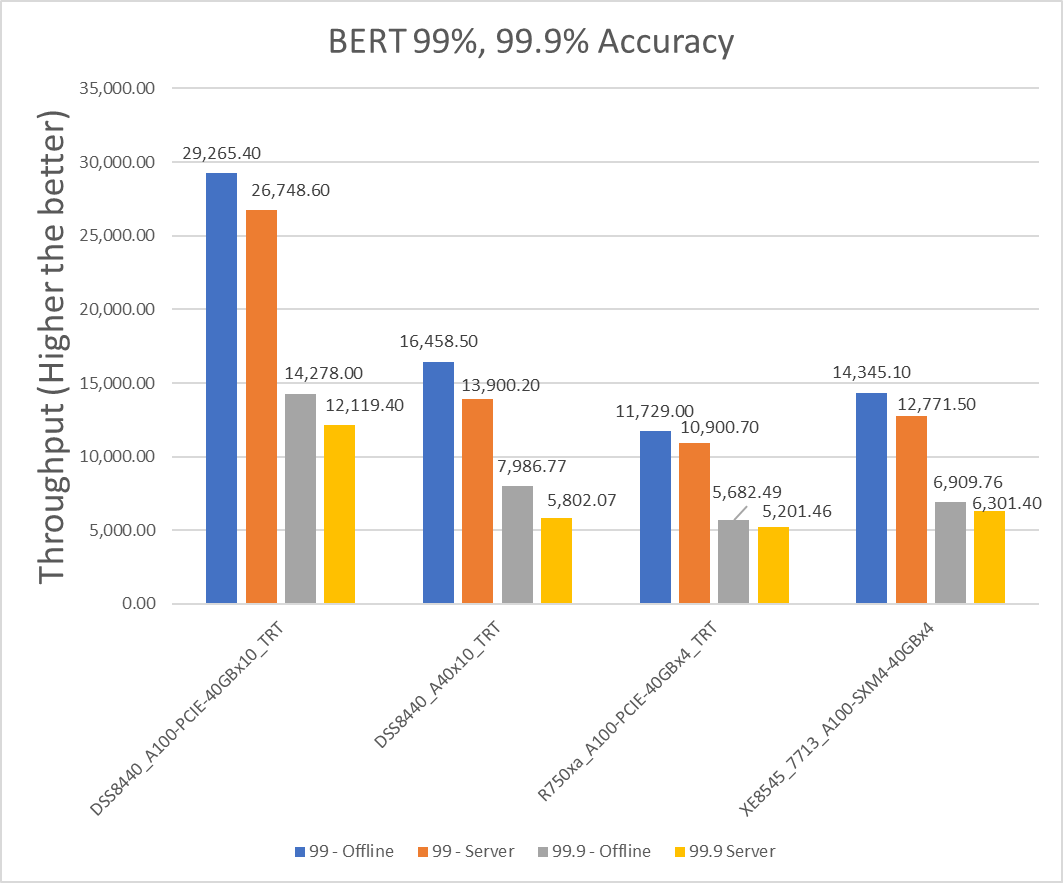 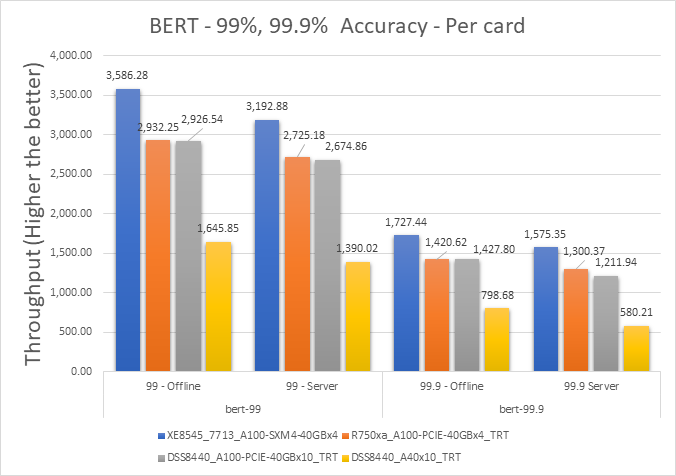 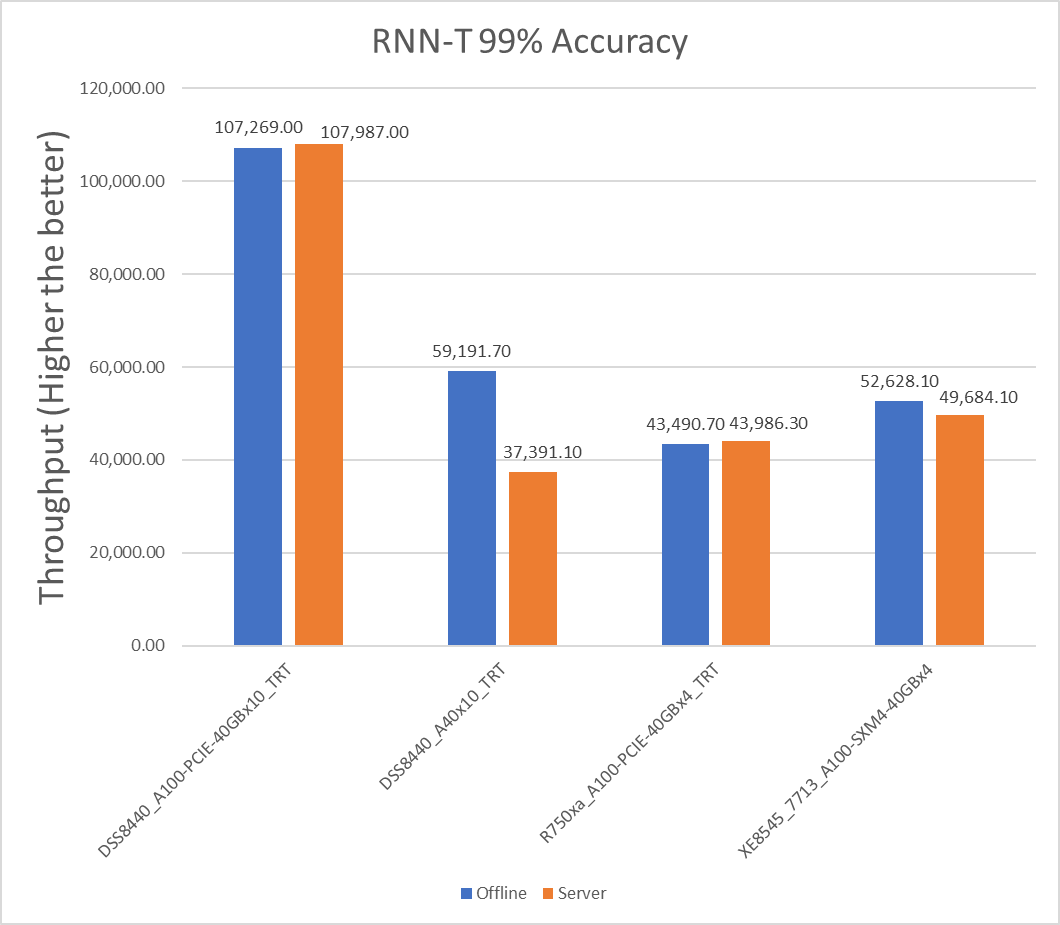 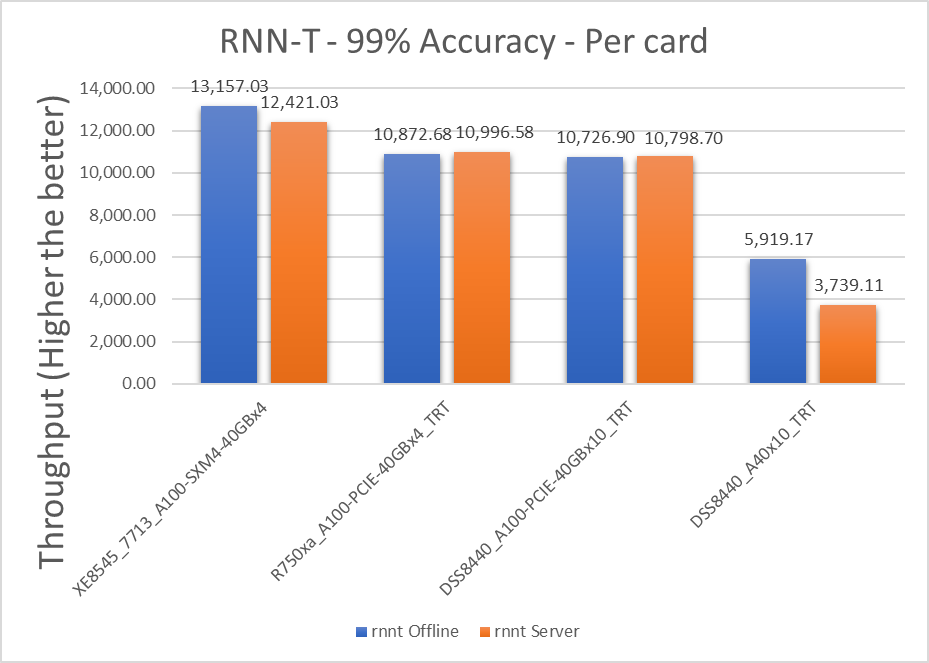 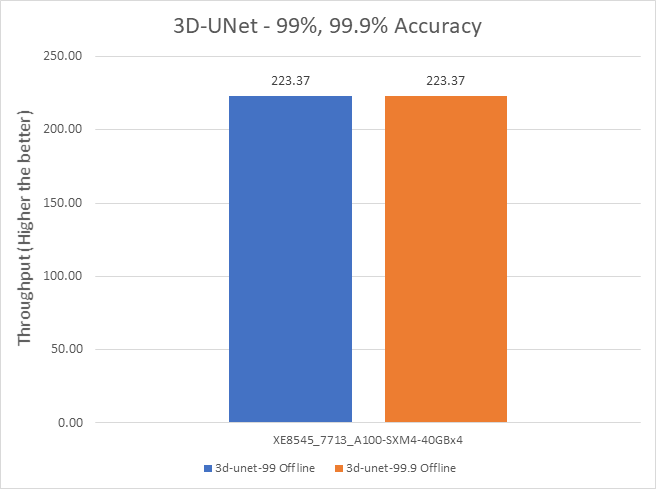 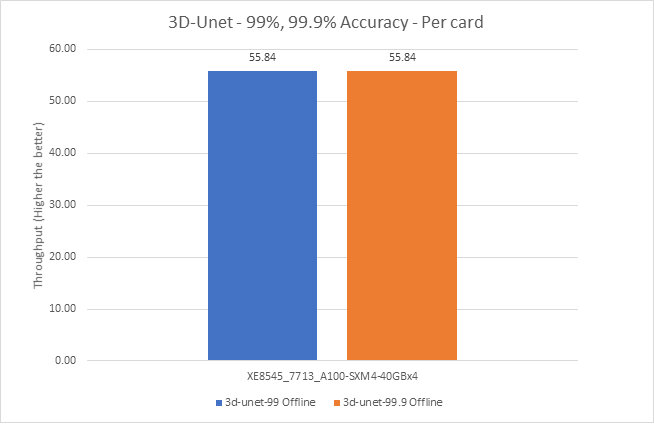 The PowerEdge XE8545 server outperforms the per card numbers of other servers in this study. This result can be attributed to its SXM GPU, which offers higher base and boost clock rate.

The SSD-Resnet34 image segmentation model benefits significantly from an SXM form factor-based GPU. The results show an approximate 34 percent performance difference compared to a PCIE from factor, relative to other models that average approximately 20 percent.

The PowerEdge R750xa server with an A100 GPU performs better in the Server scenario than in the Offline scenario for RNN-T model.

The DSS 8440 server with an A100 GPU performs better in the Server scenario than the Offline scenario for BERT, RNN-T, and SSD-Resnet34 models.

Furthermore, we found that the performance of the DSS8440 server with 10 x A100 PCIE cards exceeded other MLCommons MLPerf inference v1.0 submissions for the RNN-T Server benchmark.

In future blogs, we plan to describe how to: 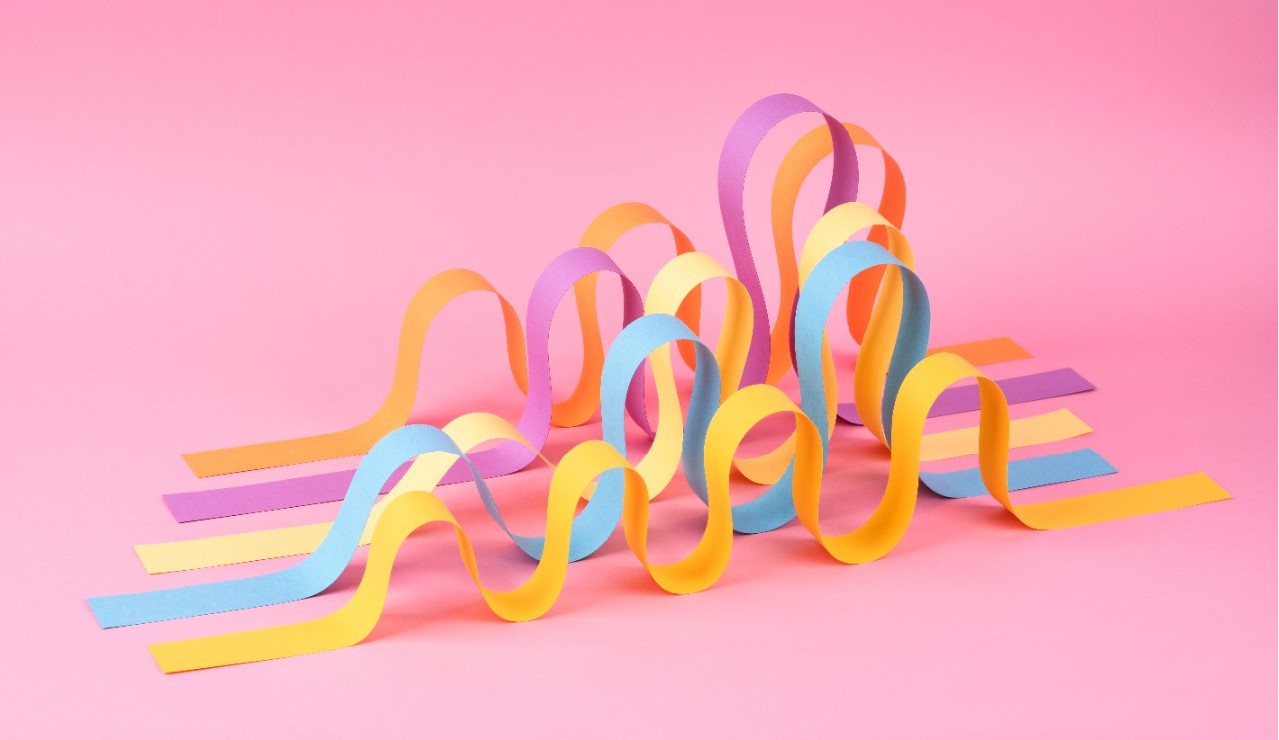 In this blog, we provide the performance numbers of our recently released Dell EMC PowerEdge R7525 server with two NVIDIA A100 GPUs on all the results of the MLPerf Inference v0.7 benchmark. Our results indicate that the PowerEdge R7525 server is an excellent choice for inference workloads. It delivers optimal performance for different tasks that are in the MLPerf Inference v0.7 benchmark. These tasks include image classification, object detection, medical image segmentation, speech to text, language processing, and recommendation.

The following figure shows the front view of the PowerEdge R7525 server:

The PowerEdge R7525 server is designed to handle demanding workloads and for AI applications such as AI training for different kinds of models and inference for different deployment scenarios. The PowerEdge R7525 server supports various accelerators such as NVIDIA T4, NVIDIA V100S, NVIDIA RTX, and NVIDIA A100 GPU s. The following sections compare the performance of NVIDIA A100 GPUs with NVIDIA T4 and NVIDIA RTX GPUs using MLPerf Inference v0.7 as a benchmark.

For more information about how to run the benchmark, see Running the MLPerf Inference v0.7 Benchmark on Dell EMC Systems.

In the MLPerf inference evaluation framework, the LoadGen load generator sends inference queries to the system under test, in our case, the PowerEdge R7525 server with various GPU configurations. The system under test uses a backend (for example, TensorRT, TensorFlow, or PyTorch) to perform inferencing and sends the results back to LoadGen.

MLPerf has identified four different scenarios that enable representative testing of a wide variety of inference platforms and use cases. In this blog, we discuss the Offline and Server scenario performance. The main differences between these scenarios are based on how the queries are sent and received:

Note:  Both the performance metrics for Offline and Server scenario represent the throughput of the system.

In all the benchmarks, two NVIDIA A100 GPUs outperform eight NVIDIA T4 GPUs and three NVIDIA RTX800 GPUs for the following models:

The following figure shows results for the ResNet-50 model: 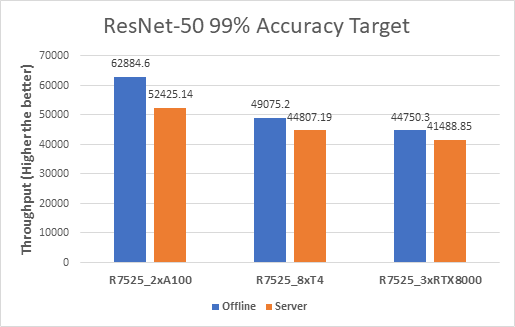 From the graph, we can derive the per GPU values. We divide the system throughput (containing all the GPUs) by the number of GPUs to get the Per GPU results as they are linearly scaled.

The following figure shows the results for the SSD-Resnet34 model: 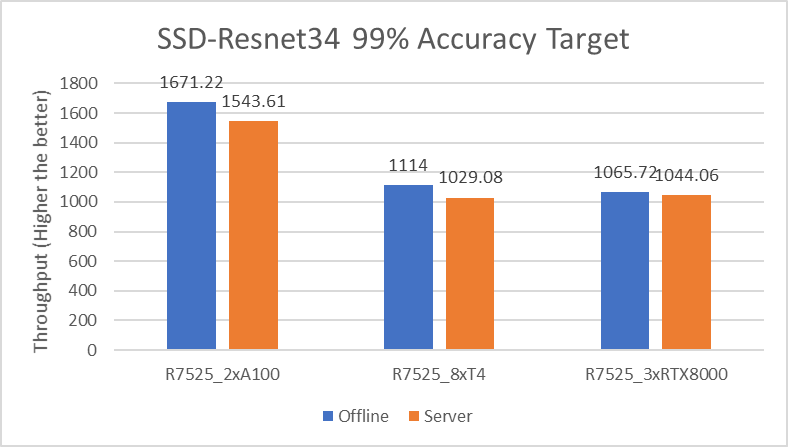 The following figure shows the results for the RNN-T model: 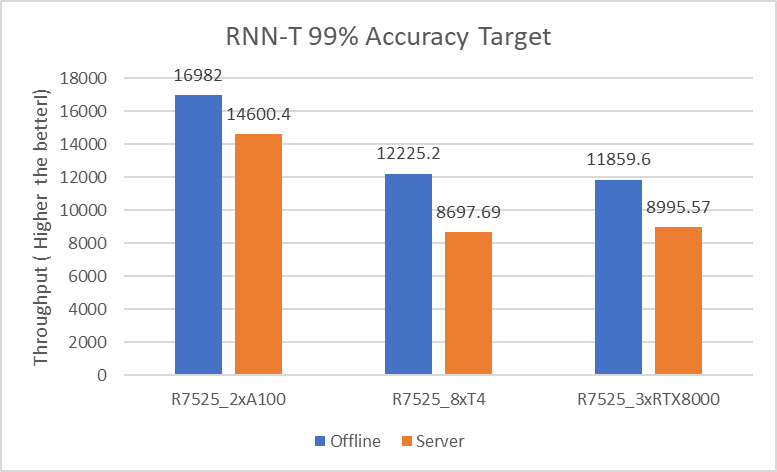 The following figures show the results for the DLRM model with 99% and 99.9% accuracy:

The following figures show the results for the BERT model with 99%  and 99.9% accuracy:

For the 3D-Unet medical image segmentation model, only the Offline scenario benchmark is available.

The following figure shows the results for the 3D U-Net model Offline scenario: 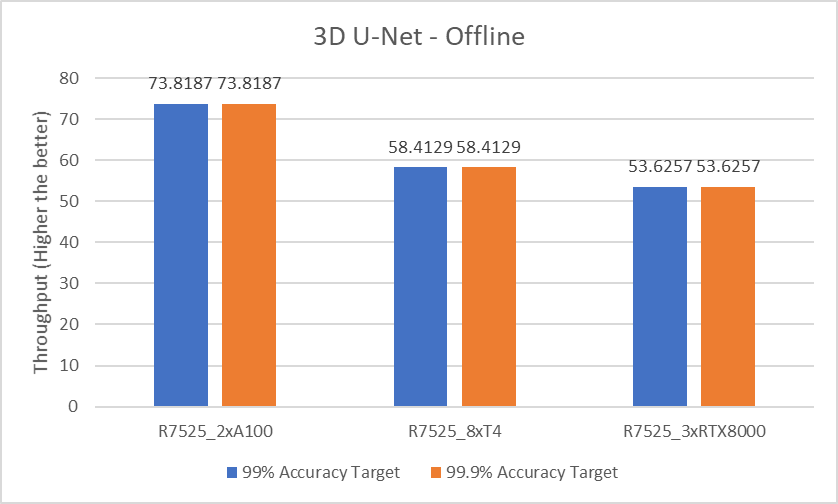 For the 3D-Unet medical image segmentation model, since there is only offline scenario benchmark for 3D-Unet the above graph represents only Offline scenario.

With support of NVIDIA A100, NVIDIA T4, or NVIDIA RTX8000 GPUs, Dell EMC PowerEdge R7525 server is an exceptional choice for various workloads that involve deep learning inference. However, the higher throughput that we observed with NVIDIA A100 GPUs translates to performance gains and faster business value for inference applications.

In future blogs, we will discuss sizing the system (server and GPU configurations) correctly based on the type of workload (area and task).

Dell  Technologies has participated in MLPerf submission for the past two years. The current submission is our fourth round to the MLPerf inference benchmarking suite.

This blog provides the latest MLPerf Inference v1.1 data center closed results on Dell EMC servers from our HPC & AI Innovation lab. The objective of this blog is to show optimal inference performance and performance/watt for the Dell EMC GPU servers (PowerEdge R750xa, DSS8440, and PowerEdge R7525). A blog about MLPerf Inference v1.0 performance can be found here. This blog also addresses the benchmarks rules, constraints, and submission categories. We recommend that you read it to become familiar with the MLPerf terminologies and rules.

Our noteworthy results include:

To allow the like-to-like comparison of Dell Technologies results, we chose to test under the Datacenter closed division, as shown in this blog. Customers and partners can rely on our results, all of which  MLCommonsTM  has officially certified. Officially certified results are peer reviewed, have undergone compliance tests, and conform to the constraints enforced by MLCommons. If wanted, customers and partners can also reproduce our results. The blog that explains how to run MLPerf Inference v1.1 can be found here.

For v1.1 submissions to MLCommons, over 1700 results were submitted. The number of submitters increased from 17 to 21.

The following graphs include performance metrics for the Offline and Server scenarios. Overall, Dell Technologies results included approximately 200 performance results and 80 performance and power results. These results serve as a reference point to enable sizing deep learning clusters. The higher number of results in our submission helps further fine tune answers to specific questions that customers might have.

For the Offline scenario, the performance metric is Offline samples per second. For the Server scenario, the performance metric is queries per second (QPS). In general, the metrics represent throughput. A higher throughput is a better result. In the following graphs, the Y axis is an exponentially scaled axis representing the throughput and the X axis represents the SUTs and their corresponding models (described in the appendix).

Figures 1, 2, and 3  show the performance of different Dell EMC servers that were benchmarked for the different models. All these servers performed optimally and rendered high throughput. The backends included NVIDIA Triton, NVIDIA TensorRT on Offline and Server scenarios. Some of the results shown in figures 1 and 3 include MIG numbers. 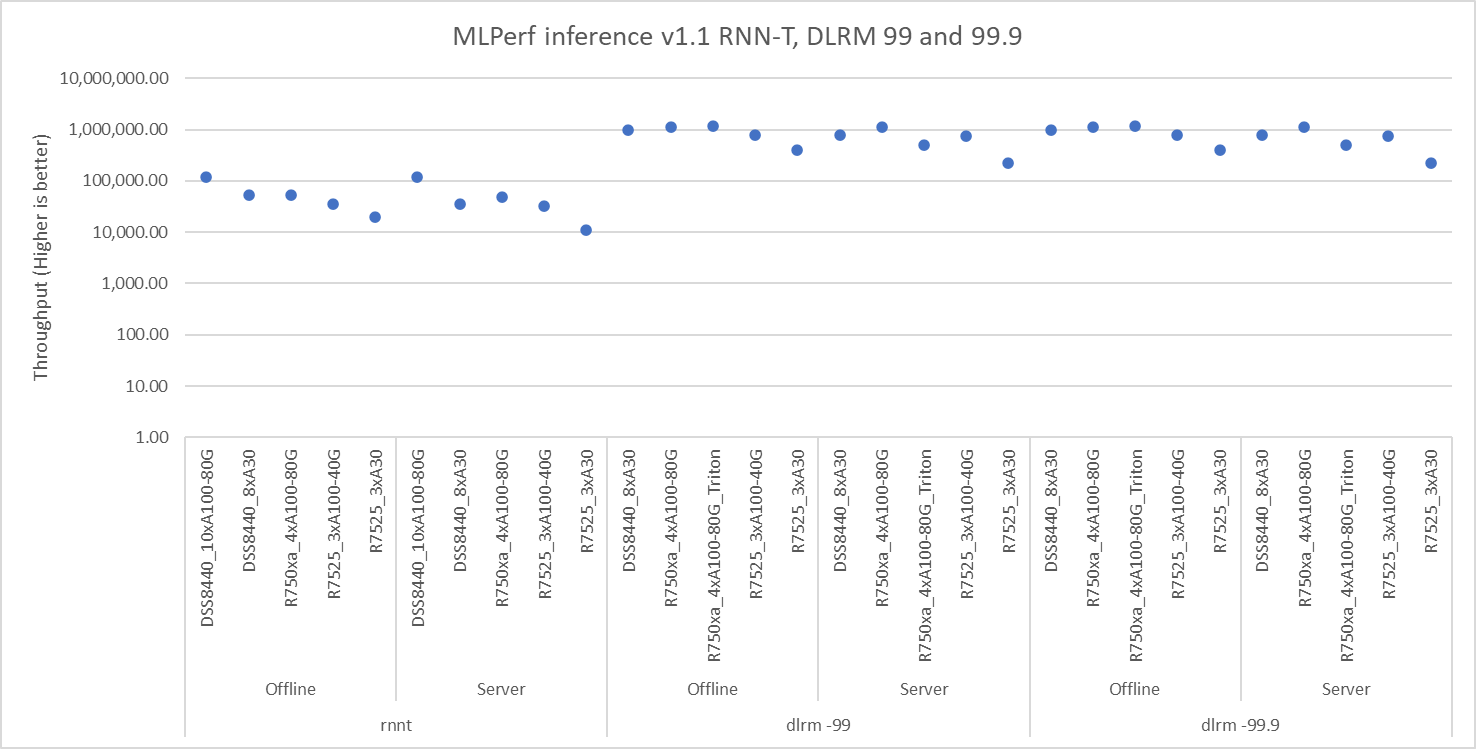 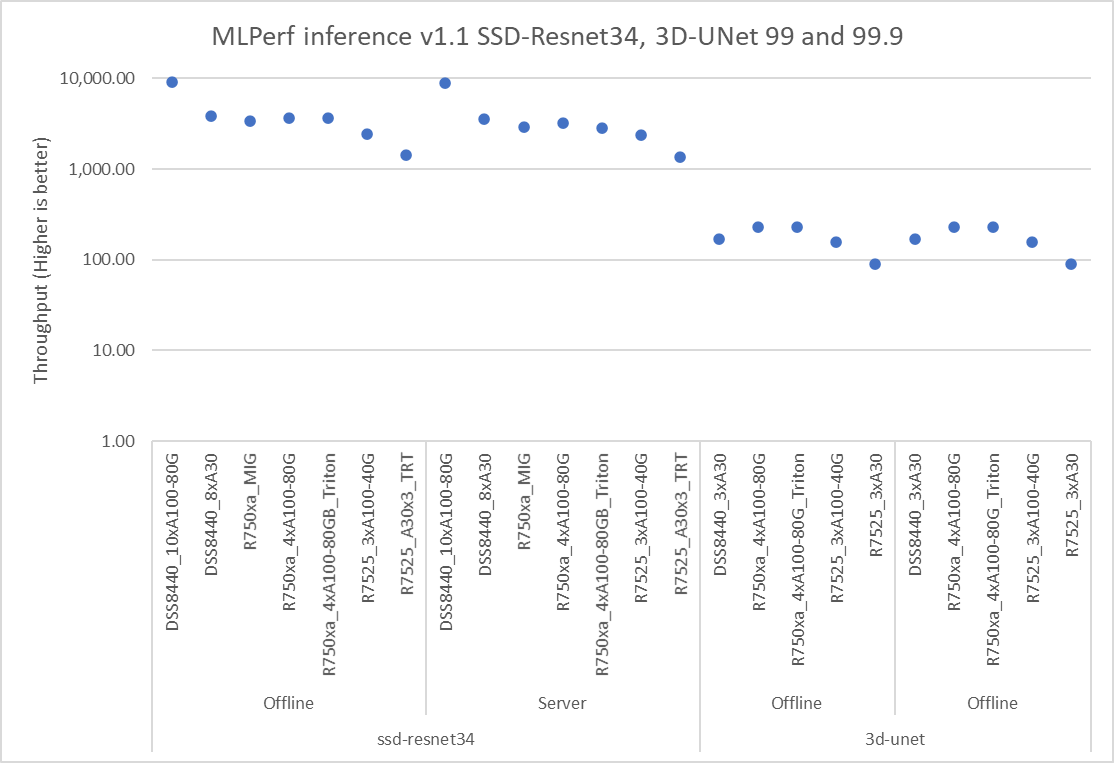 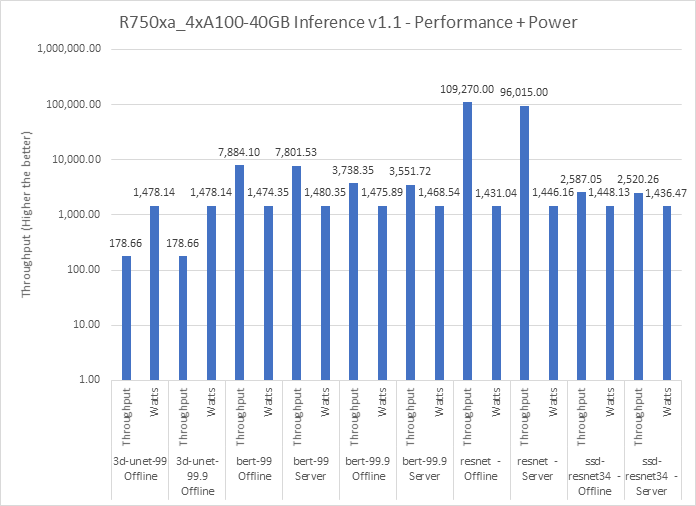 Observations about results from Dell Technologies

Different types of workload tasks such as image classification, object detection, medical image segmentation, speech to text, language processing, and recommendation were a part of these results, which were promising. These models met the quality-of-service targets as expected by the MLCommons consortium.

With different kinds of GPUs such as the NVIDIA A30 Tensor Core GPU, different NVIDIA A100 variants such as A100 40 GB PCIe and A100 80 GB PCIe, and different CPUs from AMD and Intel, Dell EMC servers performed with optimal performance and power results. Other Dell EMC SUT configuration results for the NVIDIA A40, RTX8000, and T4 GPUs can be found in the v1.0 results, which can be used for comparison with the v1.1 results.

The submission included results from different inference backends such as NVIDIA TensorRT, , and Multi-Instance GPU (MIG). The appendix includes a summary of the NVIDIA software stack.

In this blog, we quantified the MLCommons inference v1.1 performance on different Dell EMC servers such as DSS8440 and PowerEdge R750xa and R7525 servers, producing many results. Customers can use these results to address the relative inference performance delivered by these servers. Dell EMC servers are powerful compute machines that deliver high throughput inference capabilities for customers inferencing requirements across different scenarios and workload types.

In future blogs, we plan to describe:

NVIDIA Triton Inference Server is open-source software that aids the deployment of AI models at scale in production. It is an inferencing solution optimized for both CPUs and GPUs. Triton supports an HTTP/REST and GRPC protocol that allows remote clients to request inferencing for any model that the server manages. It adds support for multiple deep learning frameworks, enables high-performance inference, and is designed to consider IT, DevOps, and MLOps.

NVIDIA TensorRT  is an SDK for high-performance, deep learning inference that includes an inference optimizer and runtime. It enables developers to import trained models from all major deep learning frameworks and optimizes them for deployment with the highest throughput and lowest latency, while preserving the accuracy of predictions. TensorRT-optimized applications perform up to 40 times faster on NVIDIA GPUs than CPU-only platforms during inference.

MIG can partition the A100 GPU into as many as seven instances, each fully isolated with their own high-bandwidth memory, cache, and compute cores. Administrators can support every workload, from the smallest to the largest, offering a right-sized GPU with guaranteed quality of service (QoS) for every job, optimizing utilization, and extending the reach of accelerated computing resources to every user.

We selected servers with different types of NVIDIA GPUs as our SUT to conduct data center inference benchmarks. The following tables list the MLPerf system configurations for these servers.

Note: In the following tables, the main difference in the software stack is the use of NVIDIA Triton Inference Servers.