Enterprise SAP landscapes can have dozens of interrelated instances when you include all the nonproduction systems that are used for development, testing, training, and sandbox experimentation. SAP Landscape Management (LaMa) software combined with the Dell EMC Enterprise Storage Integrator (ESI) for SAP LaMa simplifies management of these complex SAP environments by using advanced storage-based local and remote replication services that are integrated into Dell EMC storage systems.

Dell Technologies offers the SAP enabled enterprise one of the industry’s broadest portfolios of storage array options. All the storage systems that are listed in this blog post are supported by Dell EMC ESI for SAP LaMa software for simplifying landscape management. Customers can choose a solution from any of the Unity, Unity XT, VMAX3, and PowerMax storage array models and get integration with SAP LaMa to improve management of their SAP systems. Unity XT arrays are midrange storage platforms that are designed for performance, efficiency, and data protection. PowerMax arrays are larger storage platforms that accelerate applications with end-to-end NVMe flash storage, global deduplication and compression, and data protection. The following table shows the storage arrays that ESI supports:

Examples of improved operational capabilities include: 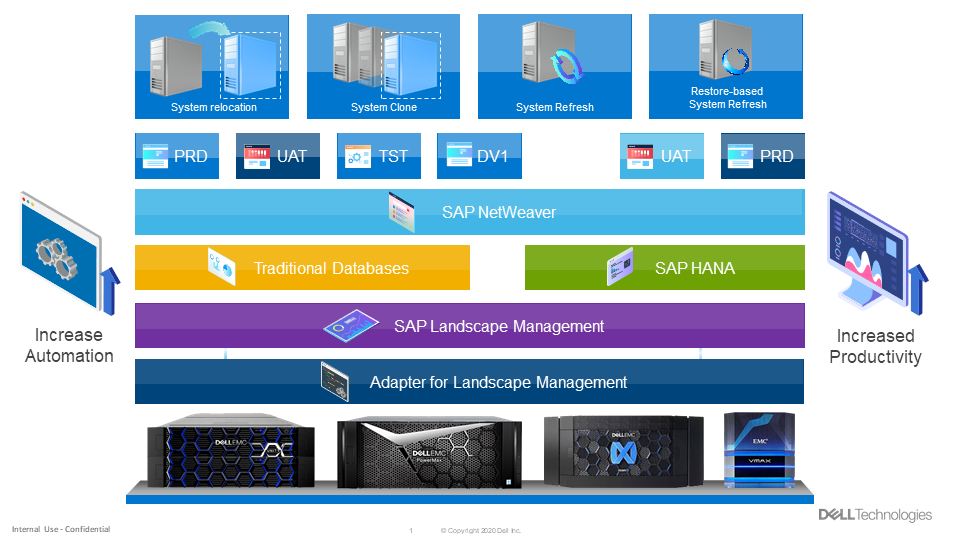 In addition to the preceding scenarios, customers can streamline operations such as monitoring and data protection by enabling Dell EMC integration with SAP LaMa. For example, with data protection integration, you can perform on-demand and scheduled backups of the SAP system. By using Unity, Unity XT, VMAX3, and PowerMax ESI integration, customers can automate most system operations for SAP. Further, the opportunity for increased storage savings through efficient storage snapshots means that SAP customers can have a greater number of SAP systems consuming less overall space on their Dell EMC storage systems.

The Dell Technologies SAP site is the place to start learning about the features and capabilities that both Dell EMC storage and PowerEdge servers offer. If you are interested in more technical material, see the Enterprise Storage Integrator for SAP Landscape Management End-user Guide 8.0 on the Dell Technologies support site. 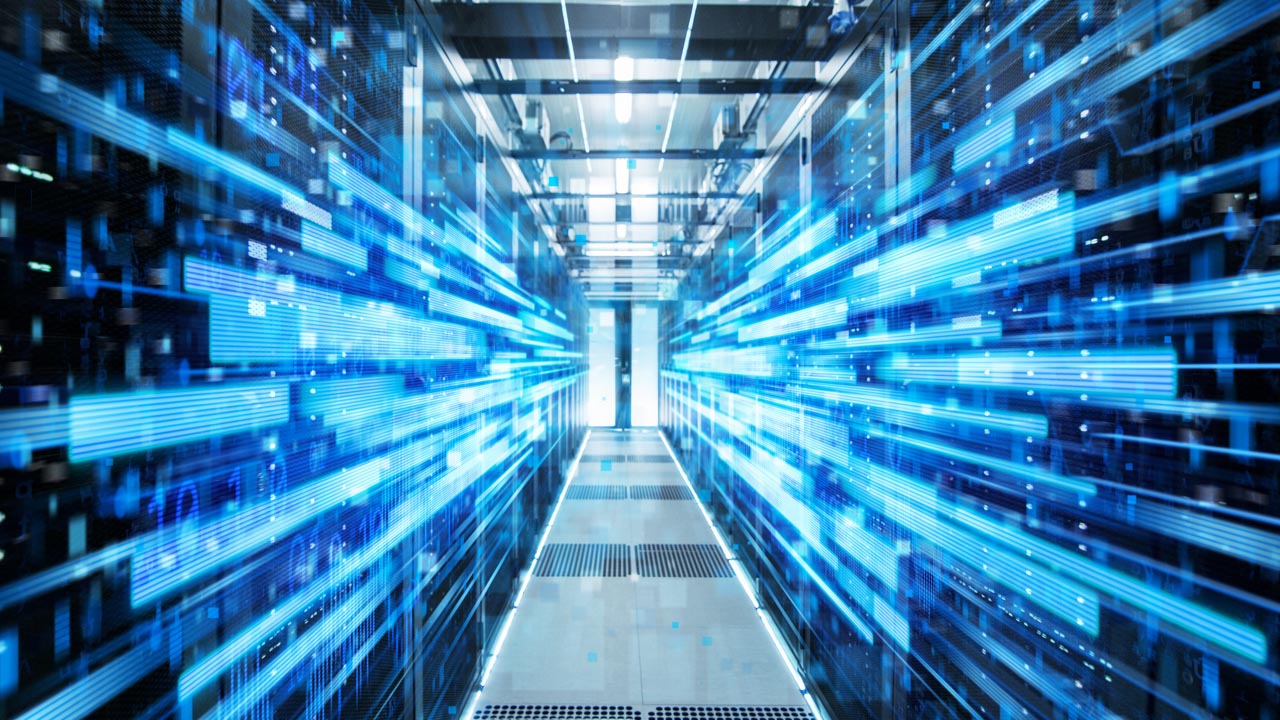 This blog discusses a recently introduced functionality for PowerMax and All Flash arrays as part of the Foxtail release. This new feature allows customers to leverage QoS settings on the PMAX/VMAXAF to reduce or eliminate Slow Drain issues due to servers with slow HBAs. This was introduced in Q2 2019 (OS 5978 Q2 2019 SR 5978.479.479). From a PowerMax or VMAX AF perspective, this can help customers alleviate congestion spreading caused by Slow Drain devices, such as HBAs that have a lower link speed compared to the storage array SLIC. Customers have been burdened by this Slow Drain phenomenon for many years and this issue can lead to severe fabric wide performance degradation.

While there are many definitions and descriptions of Slow Drain, in this blog we define Slow Drain as:

Slow Drain is an FC SAN phenomenon where a single FC end point, due to an inability to accept data from the link at the speed at which it is being sent, causes switch/link buffers and credits to be consumed, resulting in data being “backed up” on the SAN. This causes overall SAN degradation as central components, such as switches, encounter resources that are monopolized by traffic that is destined for the slow drain device, impacting all SAN traffic.

In short, Slow Drain is caused by an end device that is not capable of accepting data at the rate that it is being received.

For example, if an 8 GBs HBA sends a series of large block read requests to a 32Gbs PowerMax front-end Coldspell SLIC, the transition rate will be 32 GBs when the Array starts to send the data back to the host. Since the HBA is only capable of receiving data at 8 GB, there will be congestion at the host end. Too much congestion can lead to congestion spreading, which can affect unrelated server and storage ports to experience performance degradation.

The goal of the Foxtail release is to reduce Slow Drain issues, as they are difficult to prevent and diagnose. It does this through a mechanism where the customer can prevent an end device from becoming a Slow Drain by limiting the amount of data that will be sent to it.

On PowerMax, this can be accomplished by applying a per initiator bandwidth limit. This application limits the amount of data that is sent to the end device (host) at a rate at which it can receive data. We have provided customers the ability to leverage Unisphere or Solutions Enabler QoS settings to keep faster array SLICs from overwhelming slower host HBAs. Figure 1 shows a scenario of congestion spreading caused by Slow Drain devices, which can lead to severe fabric-wide performance degradation. 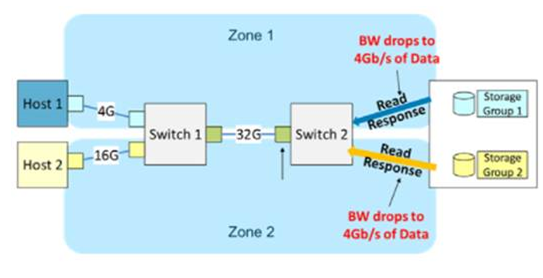 Customers can now configure per initiator bandwidth limits at an Initiator Group (IG) or Host level. The I/O for that Initiator is throttled to a set limit by the PowerMaxOS. This can be configured through Unisphere, REST API, Solutions Enabler (9.1 and above), and Inlines. 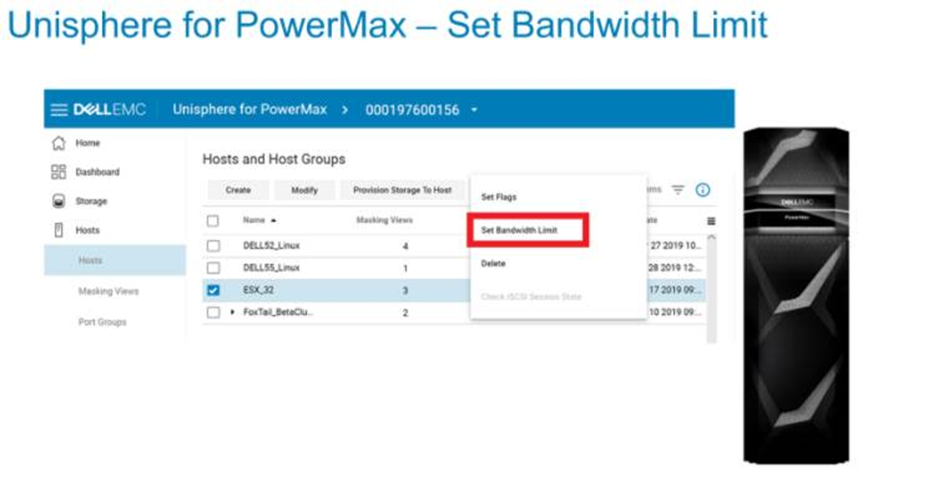 This release also includes a bandwidth limit setting. Users can go to this new menu item by clicking on the “traffic lights” which prompts the set bandwidth limit dialogue to open. The range for the bandwidth limit is between zero and the maximum rate that the Initiators can support (for example, 16,32 GB).

Note: The menu item to bring up the dialogue is only enabled for Fibre (FC) and disabled for ISCSI hosts.

Typically, B2B credit starvation or drops in R_RDYs symptoms of Slow Drain. Writes can take a long time to complete if they are stuck in the queue behind reads, it may also cause the XFER_RDY to be delayed.

The Bandwidth Limit Exceeded seconds metric is available for Solutions Enabler 9.1. In the Performance dashboard, this is the number of seconds that the director port and initiator has run at maximum quota. This metric uses the bw_exceeded_count. The KPI is available under the initiator objects section.

REST API can also be used to set bandwidth limits. All communication for REST is HTTPS over IP, and calls authenticated against Unisphere for PowerMax server. REST API supports these four main verbs:

To set the bandwidth limit, we used a REST PUT call, as shown in Figure 6.

Note: Inlines support is also available with the 8F Utility.

The following list provides more information about this release: 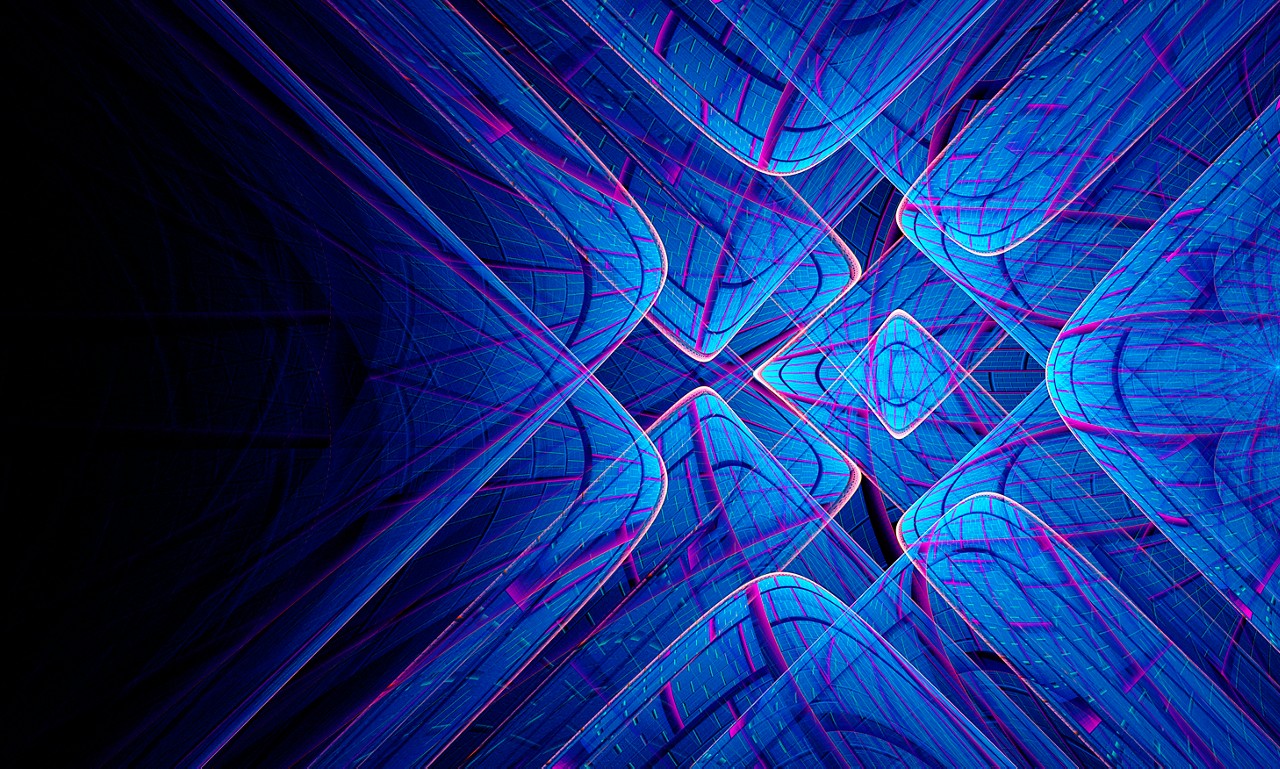 Dell Container Storage Modules (CSM) add data services and features that are not in the scope of the CSI specification today. The new CSM Operator simplifies the deployment of CSMs. With an ever-growing ecosystem and added features, deploying a driver and its affiliated modules need to be carefully studied before beginning the deployment.

In the short/middle term, the CSM Operator will deprecate the experimental CSM Installer.

For disaster recovery protection, PowerScale implements data replication between appliances by means of the the SyncIQ feature. SyncIQ replicates the data between two sites, where one is read-write while the other is read-only, similar to Dell storage backends with async or sync replication.

The role of the CSM replication module and underlying CSI driver is to provision the volume within Kubernetes clusters and prepare the export configurations, quotas, and so on.

CSM Replication for PowerScale has been designed and implemented in such a way that it won’t collide with your existing Superna Eyeglass DR utility.

A live-action demo will be posted in the coming weeks on our VP YouTube channel: https://www.youtube.com/user/itzikreich/.

In this release, each CSI driver:

Kubernetes v1.19 introduced the fsGroupPolicy to give more control to the CSI driver over the permission sets in the securityContext.

There are three possible options:

In all cases, Dell CSI drivers let kubelet perform the change ownership operations and do not do it at the driver level.

Drivers for PowerFlex and Unity can now be installed with the help of the install scripts we provide under the dell-csi-installer directory.

A standalone Helm chart helps to easily integrate the driver installation with the agent for Continuous Deployment like Flux or Argo CD.

Note: To ensure that you install the driver on a supported Kubernetes version, the Helm charts take advantage of the kubeVersion field. Some Kubernetes distributions use labels in kubectl version (such as v1.21.3-mirantis-1 and v1.20.7-eks-1-20-7) that require manual editing.

This feature is currently in alpha in Kubernetes (in Q1-2022), and is disabled with a default installation.

Once enabled, the drivers will expose the standard storage metrics, such as capacity usage and inode usage through the Kubernetes /metrics endpoint. The metrics will flow natively in popular dashboards like the ones built-in OpenShift Monitoring:

All Dell drivers and dependencies like gopowerstore, gobrick, and more are now on Github and will be fully open-sourced. The umbrella project is and remains https://github.com/dell/csm, from which you can open tickets and see the roadmap.

The Dell partnership with Google continues, and the latest CSI drivers for PowerScale and PowerStore support Anthos v1.9.

Both CSI PowerScale and PowerStore now allow setting the default permissions for the newly created volume. To do this, you can use POSIX octal notation or ACL.

For more details you can: